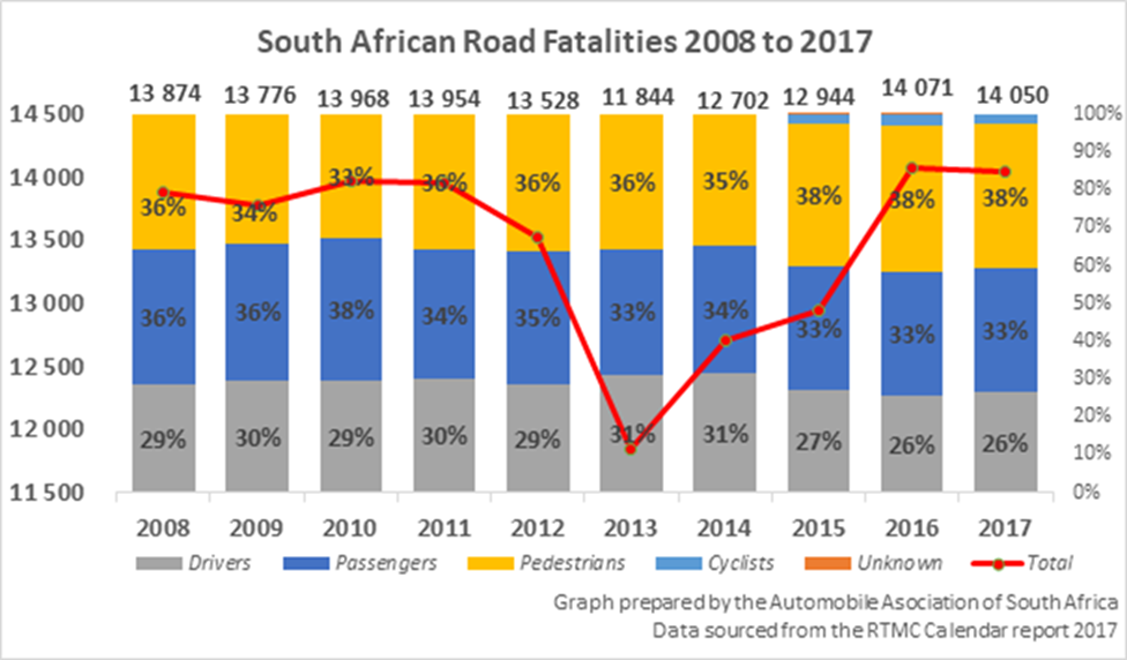 The annual road fatality statistics for 2017, made available by the Road Traffic Management Corporation (RTMC) on their website last week) is another indication of the need for urgent road safety intervention on South Africa’s roads. 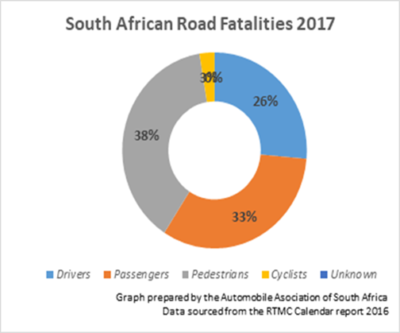 The Automobile Association (AA) says the statistics show the situation on the country’s roads is worsening, despite numerous safety campaigns by government and non-governmental organisations.

It is also important to note that the preliminary Easter road fatality statistics – released earlier this month by Transport Minister Blade Nzimande – are 14% up over the same period last year. These figures, which are likely to climb, already do not bode well for the overall national road safety picture for 2018.

“Seen against the backdrop of the fatality statistics the past ten years (from 2008) these numbers prove that current road safety initiatives are simply not working. Since then, almost 135 000 people died in road crashes in South Africa. This is a shocking number which, without urgent intervention, genuine commitment from all role-players, and a complete change in the attitude of all road users, will never significantly decrease,” says the AA.

The Association notes that the ‘stabilising’ of the fatality rate at just over 14000 deaths per annum is unacceptable, and should be seen as a national crisis. It notes a reversal of this can only be achieved through the implementation of several key plans. A key focus must be on pedestrians. Measures in this regard should include:

“Reducing pedestrian fatalities by half will bring down the national figures by almost 20% (around 2700 lives), a significant drop which will provide an immediate impact to reducing national fatality statistics,” says the AA.

The AA adds that it is also necessary for road users – pedestrians, cyclists and motorists – to realise that government can do only so much to improve road safety and reduce the number of crashes and fatalities on the roads.

“Unfortunately too many South Africans have an extremely bad attitude towards safe road use, and all the education and enforcement in the world will not stop those intent on playing by their own rules. Without a change of attitude among road users – and, importantly, a respect for the law – efforts to decrease fatalities and crashes by a noticeable margin will fall flat,” the AA concludes.

About The Automobile Association of South Africa

The Automobile Association (AA) has been the trusted champion of the South African motorist and traveller for over 85 years. Along with our AA Accredited Sales Agent stores located countrywide, the AA offers access to over 50 benefits on 1 card as well as other travel and mobility services that extend far beyond 24-hour roadside assistance – from technical and legal advice, to emergency rescue services, roadside security and a mobile app suite. The AA offers specialised apprenticeships to help motor industry players build in-house skill, and short skill courses for individuals.