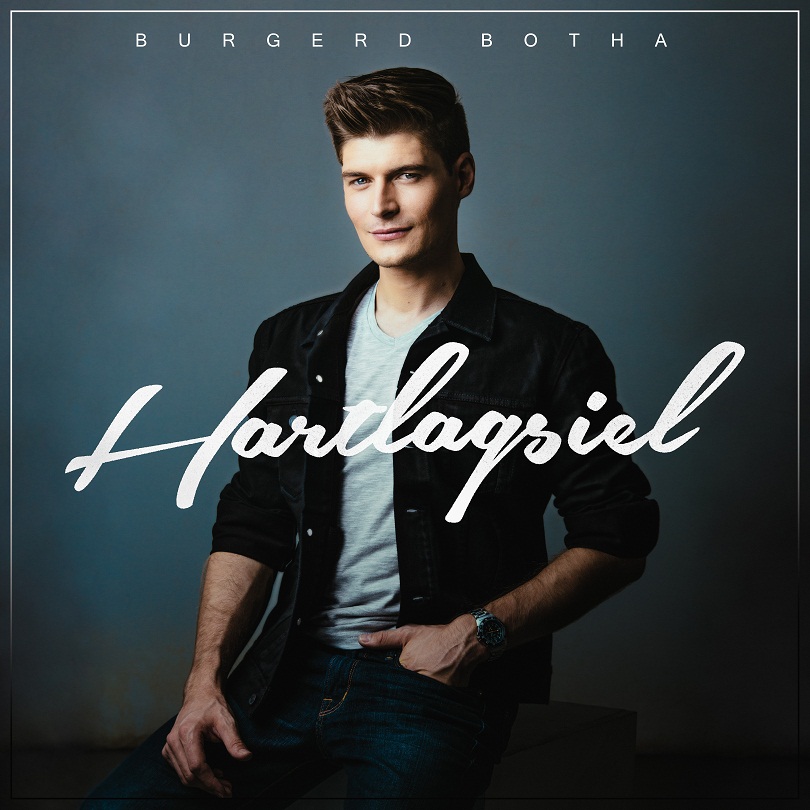 His soulful voice earned him a permanent spot in the award-winning boy band, Romanz, for seven years and has made him a regular favourite at some of the country’s biggest music festivals and concerts. His long-awaited debut solo album was just released and promises to exceed his fans’ expectations.

HARTLAGSIEL is a captivating combination of acoustic pop, heartfelt ballads and interesting electronic sounds, which will invite audiences to sing along and get lost in thought about life and love. “The aim of this album, is to motivate listeners to take on life every day, regardless of the fact that it is sometimes difficult and everything does not always go according to plan. The Lord expects you to trust him and to keep an eye on the finish line,” explains the singer. “The album was compiled in such a way that each song can be released as a single. Songs can be bought individually on the internet and I kept that in mind when doing my final selection. I like the variety and individuality of each track on the album. There is something for everyone on the playlist and I look forward to seeing people’s reaction to this project.”

This CD consists of fifteen tracks, ten of which were written by the artist himself. Although he does not want to single out a favourite, he believes that Suikerbosseisoenehas the potential to be a big hit. The last song on the album was dedicated to his friend, Adam Barnard, after his mother passed away.

Die Sterre, the third single scheduled to be released today, was written and produced by Stephantasties and has an interesting acoustic-electronic sound. “I love energetic songs with interesting stories. This is an honest song from the heart, filled with emotion and passion. It is about that stage in a relationship when you realise that you are in love and it so nice that you wish that the universe could stand still for a while. You struggle to find the right words when you look into her eyes and all you can get out, is: ‘I love you’,” he says. “The song has a fresh and modern sound and the lyrics are meaningful and deep. I believe that all of us want to experience that kind of love.” Although he does not want to reveal too much about the music video they are planning, he shares that it will contain some breath-taking special effects and lighting elements.

THE MAN BEHIND THE TALENT

Burgerd was born in Klerksdorp and comes from a musical family. His parents encouraged him to pursue music from a young age and he has been taking part in arts festivals, school concerts and competitions ever since he can remember. He was an active member of his school’s choir and performed at an international choir festival in Italy with the Jacaranda Children’s Choir. He was also part of the Youth Choir at the University of Pretoria. Although he was unsure about what he wanted to do with his life, he knew deep down that music was supposed to be a part of his future.

After school he studied music at The South African Music Institute and it was during this time that he was chosen by Select Musiek to be part of a male music group that had to be something between Westlife and Il Divo. What he did not realise at that point in time, was that this would be the start of a very successful career.

Romanz was an instant hit and soon became a multi-platinum awarded brand. The group won many SAMA, Tempo and Ghoema Awards. Being part of the group also gave him the opportunity to get some overseas exposure. A performance at the castle in Monaco during the royal wedding was televised to countries all over the world and remains one of the highlights of his career. Romanz was also invited to sing The National Anthem at a rugby test match.

The group also shared the stage with various international acts like Katherine Jenkins and Jennifer Rush, released various albums and performed at some of the biggest music events and festivals in South Africa. “I wouldn’t trade this part of my life for anything in the world. I learned so much – about myself, music, my voice and about the Music Industry. There were so many priceless highlights, and I will always be thankful for that,”says the artist.

Someone once said that music flows from heaven to the soul and that is exactly what Burgerd believes. He is so passionate about music that he cannot imagine himself doing anything else and he knows that he is blessed to be able to earn a living by doing what he loves. “No other creature understands music quite like human beings do. I truly believe that it is a gift from God. It is precious and the emotion that goes with it, cannot be described. It is a universal language that we share with one another.”

He enjoys timeless music with an inspiring message and has great admiration for stars like Andrea Bocelli, Bryan Adams, Josh Groban, The Carpenters, and more. When asked whom he would still like to work with, he says: “I have appreciation for Christiaan Botha (my brother and former member of NRG), Werner Breytenbach, Joshua na die Reën, Stephantasties and Charlize Berg’s music and admire their talent. At this stage, I would like to work with any one of them, because I like their sound and musical style.”

Burgerd is a perfectionist who believes that he has to take responsibility for his own future and career. “As head of this project, I only have myself to blame if the album is not perfect. It is a huge privilege to have a dynamic team of people working with me to help me take on this next stage of my career.”

When he is not singing, he enjoys spending time with his family. He is also an adrenalin junkie who enjoys outdoor adventures. Furthermore, he is also a director of a company called Orthologics and a songwriter for other artists.

Fans are definitely glad that this talented artist decided to share his amazing talent with the world. HARTLAGSIEL is not only proof of Burgerd Botha’s unique vocal ability, but also marks the start of a very exciting new chapter in his career. “The music on my new album has an Afrikaans acoustic pop-rock sound, with soulful lyrics, and I hope that it will show listeners that there is still some beauty left in this world,” he concludes.

The album is available on the following platforms: