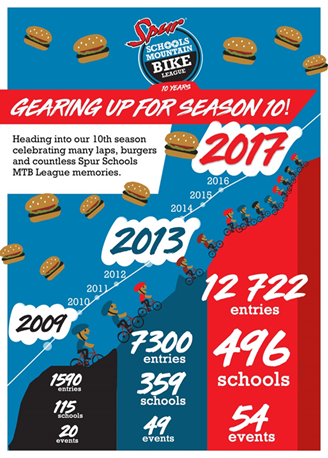 Get ready to saddle-up young mountain bikers, entries for the 2018 season of the Spur Schools MTB League are open and it’s set to be better than ever.

This year marks 10-years since the League’s inception and organisers say the tournament has “grown in leaps and bounds”. It’s developed from just 1 590 rider entries and 115 participating schools in 2009, to 12 722 entries and 496 schools in 2017. And 2018 will be no different; the League should see a 20-30 percent increase in rider entries when compared to last season.

According to Meurant Botha, director of Amarider, the League’s principal organiser; the sporting initiative seeks to introduce more schoolgoing children to MTB and to encourage South African schools to adopt it as an official in-school sport. He says the initiative also aims to provide regional and national structure in MTB at school level.

“By offering MTB as a school sport, it’s the perfect opportunity for those children who lack the ball skills that go with soccer, rugby and cricket to be active as well, and participate in a sport that is as much fun,” Botha says.

He says schools throughout the country well-known for their traditional sport strength have now become top MTB schools, with specialised staff and coaches employed to help build tracks on which to practice and ensure children maintain a rigorous training programme.  To-date the League has also managed to establish a presence in all nine provinces in the country, which Botha describes as an “outstanding achievement”.

“Every province has been running a full MTB calendar, which is great news. Parents and kids particularly enjoy this sport because everyone can participate and have fun, whether on a competitive or social level. It’s also a good way of getting kids onto the saddle and away from a mobile device,” he says.

Meanwhile, avid rider Alan Hatherly has taken his love for MTB beyond the high school tournament. This year, Hatherly was part of the team who represented the country at the Commonwealth Games in Australia. There he scooped a bronze medal in the men’s Cross Country mountain bike race. Hatherly participated in five League events during his high school career and is part of Team Spur – a group of talented riders who serve as mentors and motivational speakers for the League’s riders.

“I am really happy with the result. It went smoothly and I [was] happy to be on the podium,” Hatherly says.

To enter the 2018 Spur Schools MTB League, parents are required to complete the online registration process before entering any riders into the regional events. The first 2 000 registered riders will receive a R50 Spur voucher to redeem in a Spur restaurant nationwide.

“MTB promotes an overall healthy lifestyle and during the past ten years has created a pathway for children to follow their dreams. We look forward to the next 10 years and to making some more great MTB memories,” Botha says.

To enter the League visit www.spurmtbleague.co.za

The Spur Schools Mountain Bike (MTB) League was launched by Spur Steak Ranches and Amarider in 2009 and celebrates its 10th anniversary this year. This sporting initiative provides regional and national structure in MTB at school level and has stimulated event-planning in many regions where the sport was inactive.

In the past decade, the League has developed exponentially and to date attracts close to 13 000 entries from 500 schools annually. This statistic is expected to see another drastic increase this year as more schools look to be included in what is one of the largest schools MTB programmes in the world.

In order to grow a stable base in South Africa for a fast growing, international competitive sport, the League seeks to introduce more learners to MTB and encourages South African schools to adopt mountain biking as an official school sport.

And while mainly focused at high school level, the League does allow for primary school participation in selected regions to help grow a feeder system for the League.

The Spur Schools Mountain Bike League, with continued support from Spur Steak Ranches has managed to build a strong cross-country racing format, with events taking place in each province between May and September. For more information, please visit www.spurmtbleague.co.za.