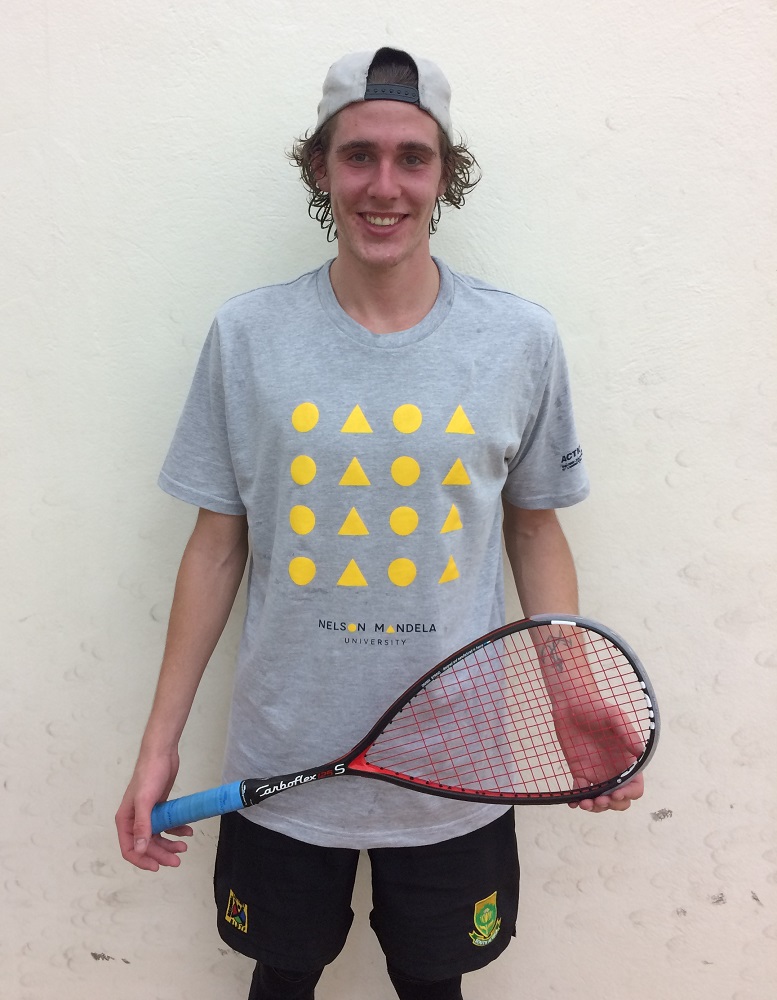 John Kuhn claimed the Madibaz Open men’s squash title at his first attempt when he defeated Rudi van Niekerk in a titanic final at the Nelson Mandela University south campus in Port Elizabeth on Sunday.

Originally from Bloemfontein, the talented lefthander, who is now studying at the Mandela University campus in George, sealed the deal on his fourth match point, finally edging his Port Elizabeth rival 13-11 in the fifth game of the tournament decider.

The women’s final was equally well contested, with Jacqui Ryder putting up a terrific performance against tournament favourite Lizelle Muller before finally going down 3-2.

After losing the first game in the men’s final, Kuhn levelled the match in a tightly-fought second game and then went ahead 2-1.

However, Van Niekerk, who had lost the previous two finals against Gary Wheadon, was not ready to give up. He charged back to make it 2-2 and the pair then became involved in a furious struggle for supremacy in the decider.

In the end, using his relentless retrieving ability to keep the pressure on his opponent, Kuhn held two match points at 10-8.

Ryder and Muller have had some serious battles in past tournaments, but this was one of the most fiercely fought as the former did everything she could to upset her top-ranked opponent.

Down 2-1, Ryder showed her fine shot-making ability and determination to level at 2-2.

The final game was marked by an unfortunate collision between the two players in the first point, which led to an injury time-out.

When they returned, it was Muller who was finally able to establish her superiority by taking the decider 11-4.

“We were really happy with the way things went and there were a lot of closely contested matches,” he said.

“An example of this was the semifinal clash between Madibaz player Hayley Ward and Jacqui Ryder. Hayley has beaten Jacqui twice this year, but this time Jacqui took the honours 3-2.”

Madibaz squash manager Melissa Awu congratulated the winners on their efforts and thanked all those who were involved in the tournament.

“We are very proud to have the hosted the local squash community over the weekend in a tournament which showed respect for each other and diversity, two values which are very important to us as a varsity,” she said.

“It was a great fellowship of squash and I want to thank the squash committee for all their work behind the scenes. They did a marvellous job.”

CAPTION: John Kuhn, of the Nelson Mandela University George campus, won the Madibaz Open squash title in his first appearance in the event when he defeated local star Rudi van Niekerk 3-2 in the final at the south campus in Port Elizabeth on Sunday. Picture: Supplied