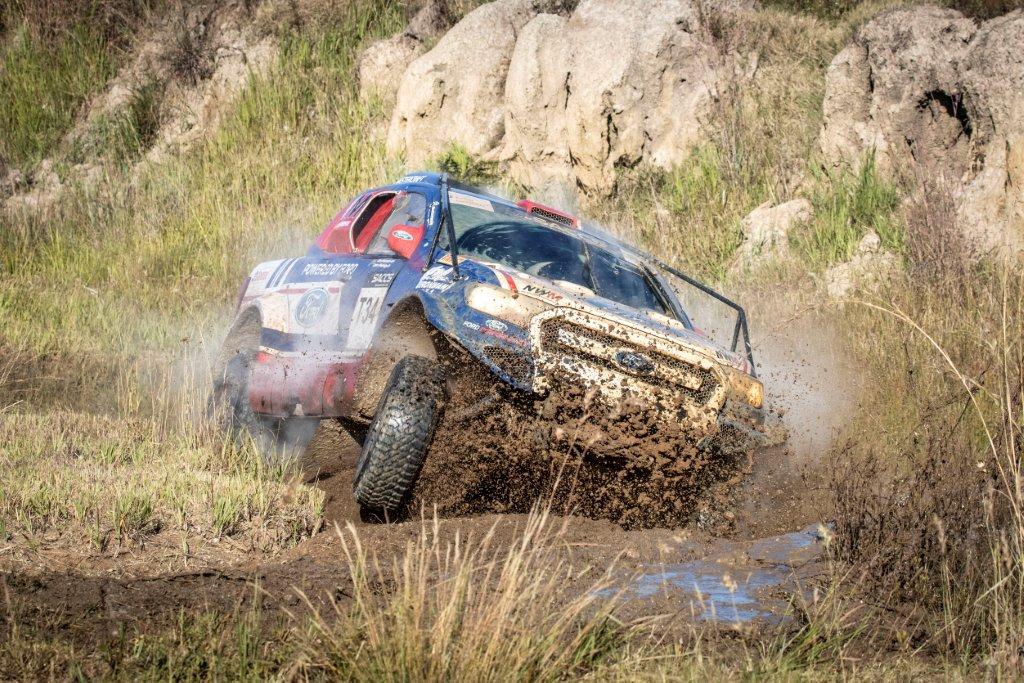 Brian Joss – The Battlefields 400, round two of the 2018 South African Cross Country Series, proved a happy hunting ground for the Ford Neil Woolridge Motorsport team this weekend, as Lance Woolridge and Ward Huxtable scored their second Class T win in a row.

It was also a repeat victory for the crew at this event, after they won the inaugural Dundee race last year – although the conditions were dramatically different 12 months later. Compared to the wet and muddy 2017 race, this year’s battle took place in generally dry and dusty conditions, but the route was extremely rough and required maximum concentration throughout the two days of racing.

With the X Rally Team of Cristian Baumgart and Beco Andreotti standing in for team-mates Marcos Baumgart and Kleber Cincea who competed in a Brazilian round of their domestic cross country championship this weekend, it was an impressive outing that earned them a commendable third-place finish in Class T.

After dominating the qualifying race for the second race in succession, Gareth Woolridge and Boyd Dreyer brought their NWM Ford Ranger home fifth, having endured a tough event that included getting stuck in mud and later damaging their suspension.

Gareth Woolridge and Boyd Dreyer are quickly earning an enviable reputation as one of the fastest crews in the SA cross country championship – and rightly so as they led the charge on Friday’s short 61km qualifying session in Class T for the second time this season.

They finished 37 seconds ahead of the Toyota Hilux of Gary Bertholdt and Geoff Minnitt, with Lance Woolridge and Ward Huxtable just 59 sec behind their Ford NWM team-mates in third place, despite having an early scare as a bolt on Lance’s race seat snapped soon after the start of the stage, which made the remaining kilometres a challenging affair. Baumgart and Andreotti were fourth quickest, a mere 16 sec adrift.

Race day dawned bright and clear, with the promise of plenty of action over the two scheduled loops of 157km each.

Gareth Woolridge was running comfortably at the head of the Class T field, maintaining a comfortable pace for the opening lap, and came into the scheduled pit stop and regroup at the Battlefields Lodge with a two-and-a-half-minute lead over Bertholdt/Minnitt.

Unfortunately, it all went south in the second loop, when the young duo – running as the second car on the road – got stuck in a mud hole and lost five minutes in the process. Overall race leaders Giniel de Villiers/Dennis Murphy also nearly got caught out in the same sticky spot, and it was their Class FIA Toyota Hilux team-mates of Henk Lategan and Barry White that came to the rescue of the stricken Ford and pulled them out.

Gareth and Boyd resumed their challenge with vigour and were going well until they hit a rock that had been pulled into the road by an earlier competitor. This ripped the right rear trailing arm clean off the chassis, but they managed to strap it together and limped along for the remaining 50km and made just made it to the finish before being time-barred.

Their never-say-die attitude and tenacity saw them being rewarded with a fifth-place finish, and their first points of the 2018 championship. For Lance and Ward, their only drama was on the first loop when they picked up a puncture on a particularly rocky section approximately 100km into the stage – and then struggled to undo the wheel nuts that had been overtightened. They completed the remaining section without hassle and made the most of the dramatic number of retirements on the second loop to quickly progress up the running order.

The leading Ford passed the Toyota of Bertholdt and Minnitt when they stopped for a puncture, and the two crews had an entertaining dice to the finish, with Lance and Ward eventually crossing the line with a winning margin of 1 min 06 sec, and second in the overall standings to the FIA-spec Toyota of De Villiers/Murphy. This secured Lance and Ward’s second win of the season to give them a valuable championship lead.

Cristian and Beco had a generally clean race throughout, although they were also a victim of the treacherous mud hole that hampered Gareth and Boyd, and also lost a fair bit of time. A third-place finish was a commendable result considering the extremely rough terrain, and the high attrition rate across the entire field with just 12 of the original 30 teams making it to the finish.

“The Battlefields were kind to us for the second year in a row, with a great result for the team, but it was an extremely challenging race for all competitors. It was a little disappointing for Gareth and Boyd as they had bad luck and deserve better, but at least they made it home and got some points, which all adds up at the end of the year.

“Two wins for Lance gives him a perfect start to the year, and Cristian and Beco did well to come home third. They got stuck in the same mud hole as Gareth and Boyd, and lost quite a bit of time there, but they really enjoyed it, even though they said it was the roughest race they’ve ever done.

“Just about everyone had dramas during this race, and a lot of teams dropped out. The qualifying and first loop went well, and everything looked good with the times fairly close. But then it all seemed to fall apart on loop two. It was very rough out there, particularly on the second lap, and everybody commented on how difficult the conditions were. The route markings and road book seemed to be an additional challenge, with numerous inconsistencies.”

Lance Woolridge (T34): “It’s fantastic to win again in Dundee and extend our championship lead. We started off in a nice groove in the morning, but then had puncture on a rocky hill. When we stopped to change it, the wheel nuts were over-tightened, and we lost a lot of time getting them undone which was a bit of a disaster.

“As we got going Cristian and Beco passed us, and we got stuck behind them as they didn’t know we were there. We eventually took a risk to pass them which fortunately went without incident, and then had a clean run through the remainder of the lap.

“On the second loop we were going well, then saw Gareth and Henk parked, and passed Gary as he was getting going from a puncture – all within about 10km. Chris Visser had also stopped, which was great for us, but horrible for all of them. Gary was close behind us for the remaining part of the race, and we had a good dice all the way to the finish. Fortunately, we managed to stay ahead, and took the win by just over a minute ahead of Gary. “It was a very tricky race, and we had to keep our wits about us the whole time. It was extremely rough with lots of natural ditches and rocks, plenty of hazards that could easily catch you out.”

Cristian Baumgart (T88): “This was undoubtedly the roughest race we’ve ever done, and we are very sore. If this race was in Brazil, there would be no finishers. It was a great learning experience getting to know the car, particularly as it was the first time that I had the opportunity to drive the Class T Ranger with the solid rear axle. Our NWM Rangers in Brazil are FIA-spec with independent rear suspension.

“We were very impressed with the car and are happy with the result. We just got stuck in a mud hole, but we learned a lot and had plenty fun, and we might come back soon.”

Gareth Woolridge (T77): “It was a mixed race for us. The prologue was really good, and the race was going well until the second loop. We came into the pits in the Class T lead after the first lap having taken it easy, not wanting to take any risks. We lost some time after the decontrol on the first lap, so pushed hard for the next section, and entered the pits two-and-a-half minutes ahead of Gary and four minutes faster than Lance, so were safe.

“On loop 2 were got stuck in a mud hole. We were the second car there behind Giniel, who almost got stuck as well. Thankfully Henk pulled us out, but we lost about five minutes getting out. I tried to push a bit after that to catch up but wasn’t taking any risks.

“In the last 50km we clipped a rock that had been pulled into the road by other competitors with the right rear, which tore the trailing arm clevises off the chassis. It was really unlucky for us, and I thought the race was done. But we stopped and managed to strap it all back together around the axle and limped back to the finish working out the average speed we needed, and made it across the line just in time before being time barred.”

The next race is the Toyota Botswana Desert Race in Jwaneng, from 22 to 24 June.