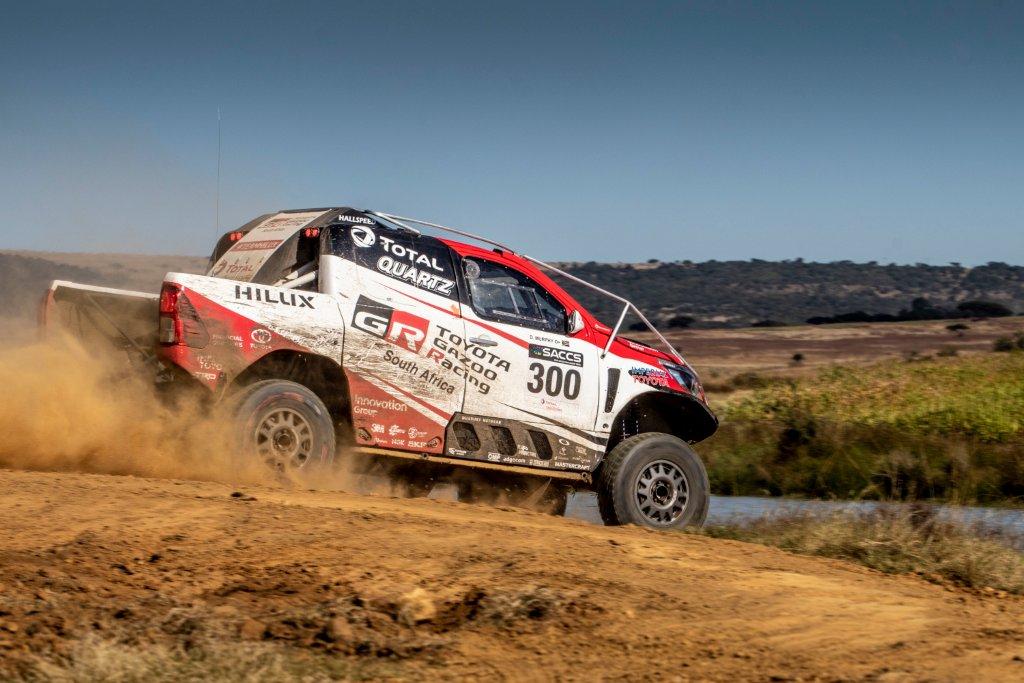 The race, round 2 of the 2018 series, saw De Villiers partnered with Dennis Murphy again, after Robert Howie suffered a back injury during a hard landing on the recent Qatar Cross-Country Rally.

“Dennis and I won the championship together last year,” said an ecstatic De Villiers after bringing the Toyota Gazoo Racing SA Hilux home nearly 12 minutes clear of his nearest competitor. “So, we were immediately comfortable together in the car, and managed to secure the win for Toyota.”

The pair set about their task with clinical precision, posting the fastest time on Friday’s Qualifying race. This meant that they had to open the road on Saturday’s main race – a daunting task in the extremely rough conditions encountered on the Battlefields route laid out in the hills surrounding the KwaZulu-Natal town of Dundee. Despite suffering a single puncture during the main race, De Villiers/Murphy romped to a convincing win, cementing De Villiers’ championship lead, and potentially moving Murphy to the top of the navigators’ championship standings.

At the same time, teammate Henk Lategan, paired with co-driver Barry White for this event, started the event with a bang. The pair went third-fastest during the qualifying race, trailing De Villiers/Murphy by just 01:09. But unfortunately, their race became a mission of survival, rather than the challenge for a win they had hoped for.

“We had two punctures in the first loop,” said Lategan after returning to the Designated Service Park (DSP) outside the town of Dundee. “But little did we know that the first loop would be the easy one for us.”

Lategan/White started the second loop on a charge, and quickly closed the 02:20 gap to the Ford of Gareth Woolridge and Boyd Dreyer ahead of him. The Toyota Gazoo SA pairing were stuck in the Ford’s dust, until Woolridge/Dreyer fell foul to a deep mud hole, leaving no way past for the Toyota crew.

“We then picked up the pace again, but just five kilometres before the start of a de-controlled section on the route, an alternator belt came off the engine,” continued Lategan. “We were forced to stop and replace the belt, but with Barry new to the car, the change took longer than anticipated.”

In the end, Lategan/White finished as the seventh production car home, but sealed second place in Class FIA. This, together with a second-place finish in Class T for Gary Berthold and Geoff Minnit (Atlas Copco Toyota Hilux); and a Class S victory for Archie Rutherford and Pieter van Wyk (Atlas Copco Toyota Hilux), was enough to secure the Manufacturer’s Award for Toyota.

“It was a tough weekend for everyone,” was Toyota Gazoo Racing SA Team Principal, Glyn Hall’s summary. “Only 12 cars finished the race, so we have every reason to be proud of what we achieved here this weekend. The fact that we also won the Manufacturer’s Award is testament to the reliability and toughness of the Toyota Hilux.”

Next up for the SACCS is the Toyota Kalahari Botswana 1000 Desert Race – or just the Desert Race, for short. This is the crown jewel of the SACCS calendar, and the one race that everyone wants to win, partly due to the fact that it scores double points due to its status as the only marathon event on the calendar. But more than that, The Desert is a legendary race, and without any doubt the toughest automotive race on the African continent.

Last year saw Giniel de Villiers and Dennis Murphy win the Desert Race by only 6 seconds from teammates Leeroy Poulter and Robert Howie, and 2018 is certain to bring as much excitement when the event takes place on the weekend of 22-24 June, 2018. The Desert Race also marks the mid-point of the 2018 season, and offers Toyota Gazoo Racing SA a great opportunity to test new developments on the Toyota Hilux in preparation for Dakar 2019.

CAPTION: Victory: Giniel de Villiers and Dennis Murphy on the way to a win.  Picture: Motorpress