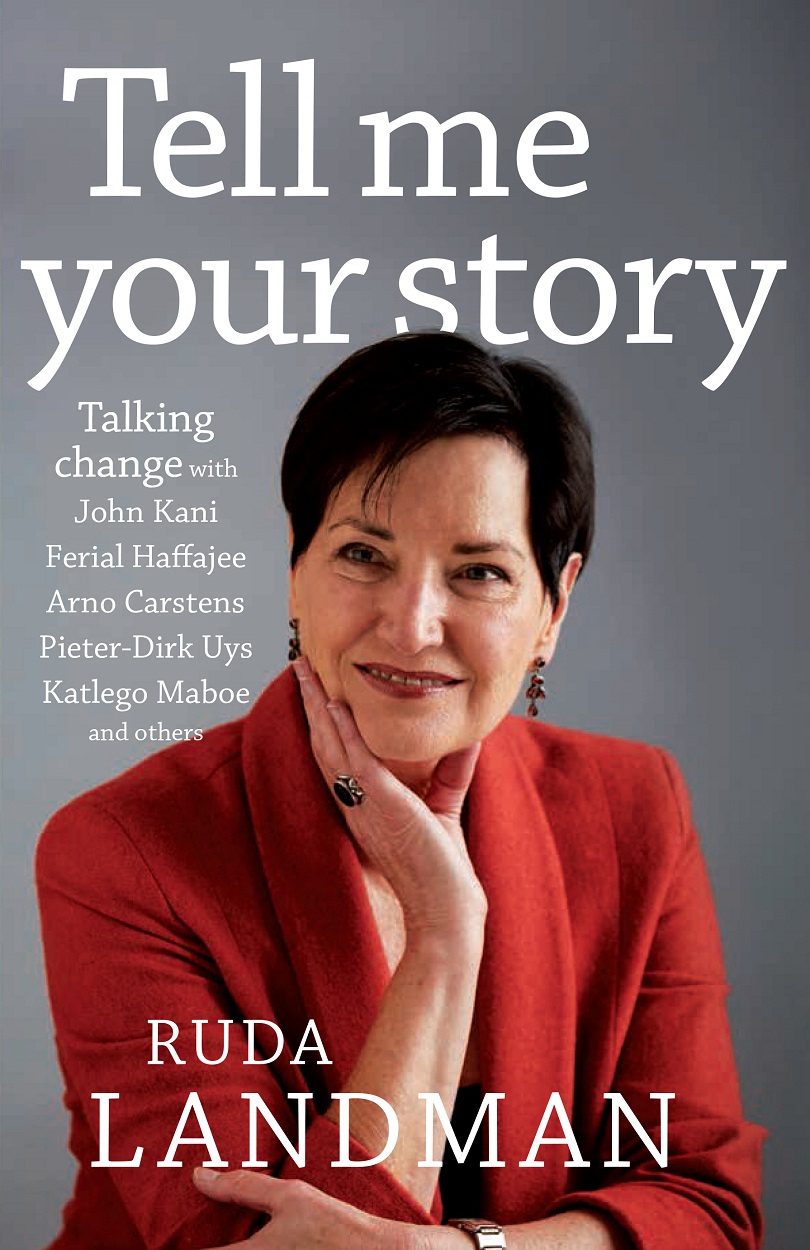 Ruda Landman was the face of M-Net’s investigative programme, Carte Blanche, for 19 years and she hosted Veranderinge on KykNet and her interviews made for compelling viewing. In Tell Me Your Story, Landman who has been a journalist for 40 years, has interviewed a range of personalities as diverse as actor John Kani; the late racing driver Gugu Zulu who died while climbing Mount Kiliimanjaro in Tanzania about two years ago; Mam Khanyi who looks after orphans; satirist Pieter Dirk-Uys and Patricia de Lille, who as I write this has been ousted as Cape Town’s mayor but she is still fighting her removal in court so the outcome is still uncertain.

Others include cartoonist Zapiro and musician Wouter Kellerman who won a Grammy in 2016 and has harnessed a fistful of South African music honours.

The interviews are written in a question and answer format. The session with Patricia de Lille is revealing and goes a long way in helping to understand the complexities of this controversial woman. She grew up in Beaufort West in the 1950s and remembers the “pencil test” which the then National Party used to determine a person’s racial identity. While standing on one leg you had to shake your head and if the pencil stuck in your hair you were declared black and given a dompas, the dreaded document that restricted the movement of black people. De Lille says that two of her mother’s brothers were declared white; one was declared black and her parents were declared to be of mixed race, coloured. De Lille admits in the interview that she could not stand white people but the Pan Africanist Congress (PAC) of which she was a member taught her that, “it’s not the white people you should be angry with, it’s the system. The system of apartheid.”

De Lille was sent to the Convention for a Democratic South Africa (Codesa) as the PAC’s representative and two turbulent years later when the Multiparty Negotiation Forum was formed De Lille was for the first time, it seems, in the same room as white people and that included the former minister of foreign affairs Pik Botha and Roelf Meyer, the NP’s chief negotiator at Codesa. It was there that she started to learn to deal with the hatred in her heart, thanks to her mentor, Deputy Chief Justice Dikgang Moseneke, also a PAC member, who told her we “have to do this for our country”. Eventually she started making friends with white people among them Danie Schutte, then minister of home affairs and Deon Basson who later became a judge. It was also her first exposure to Afrikaner people.

De Lille is known for her whistle-blowing role over the arms deal. But what is not so well-known is that she was the first woman to found a political party, the Independent Democrats for people who weren’t comfortable with the ANC or the Democratic Alliance. The rest is history. The biggest change moment for her, De Lille says, “was being part of the new dispensation in our country”. “My job is not finished. There’s much more to be done.”

Actor John Kani was born in New Brighton, Eastern Cape, known as the powder keg of the struggle. Life doesn’t go as planned and he was prevented from joining the ANC who were on a recruiting drive when he was about 18 or 19. His father, a policeman (6ft 8) came home falling down drunk one night and collapsed in the doorway. When Kani heard the hooter of the recruiting vehicle he couldn’t move his father who was in the only entrance-exit of the house and the car moved on – without him. Fate had something else in store for Kani, the stage.

Kani recalls that famous “kiss” he had with Sandra Prinsloo in Ms Julie which sent shockwaves around the country. And you can hear it straight from the man involved, and not in the way the newspapers of the time described it in banner headlines. Then it happened again in Othello which was directed by Janet Suzman but the reaction wasn’t quite as vociferous as with Miss Julie. The play was filmed and shown in England which led to Kani being recognised as one of “those greatest African Shakespearean actors”. Kani remembers the first time he ever voted (April 27, 1994). Photographers were there to take his picture when he put his ballot paper in the box. He obliged and didn’t make his cross then but he went back to stand in the queue with the hundreds of other people because he wanted to.

Through her astute questioning Landman gets some surprising responses from the people she interviewed. Cartoonist Jonathan Shapiro, Zapiro, recalls the moment in Paris he visited Albert Uderzo who drew Asterix; he couldn’t speak English and Zapiro couldn’t speak French but Uderzo’s daughter, a student at the Sorbonne who was studying English saved the day by translating for them.

Dineo Ndlanzi is a sangoma who straddles the line between tradition and the modern world by taking her calling into the boardrooms for training sessions where she works as a coach and facilitator.  She is also a kobela who trains other healers.

The interviews are from a selection of conversations Landman had when she hosted Veranderinge on Kyknet. The book includes a question and answer session with Landman. Tell Me Your Story is an extremely interesting read about the life choices prominent South Africans have made and how those decisions affected them. Royalties from the sale of this book will go to StudyTrust, an organisation which supports university students.