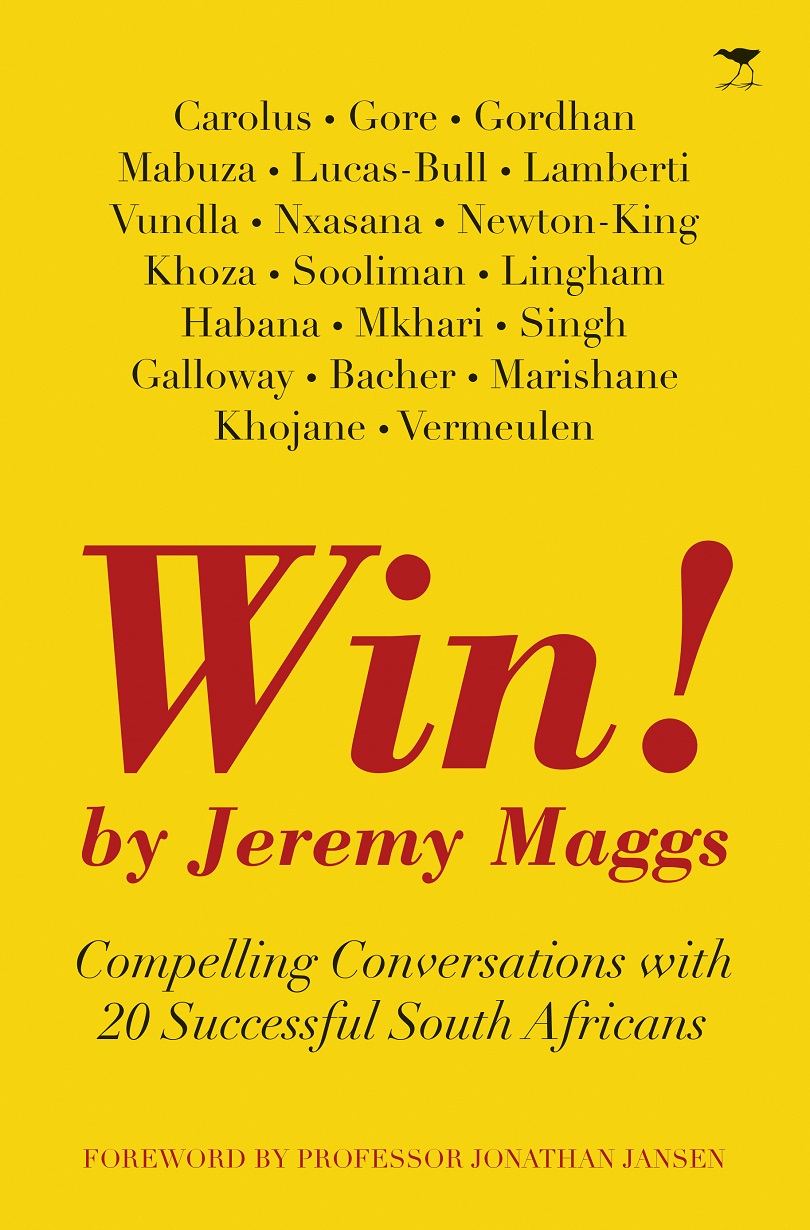 “If I screw up, let me know,” is the chapter heading for Mark Lamberti, one of the successful South Africans that Maggs interviewed. Well, Lamberti did screw up in the case of Adila Chowan, a manager at Associated Motor Holdings (AMH), when she challenged his decision to employ a white male who was less qualified than she was as chief financial officer, despite promises that she would be promoted to the position. Ms Chowan let him know that he did “screw up” and  took the matter to court which found the CEO and Eskom board member had acted in a sexist and racist manner. Lamberti has since resigned as CEO of Imperial Holdings of which AMH is a subsidiary and from the Eskom board.

Lamberti is a  Harvard alumnus and the  founder of Massmart Group. According to Maggs,  Lamberti is a philanthropist and has educated scores of underprivileged children. And the legacy he wants to leave: “I think the long term is created by what you do every day and I would hope that my behaviour touches them in a way that leaves them better off. Whether they remember me for it or not, is not important.” Tell that to Alida Chowan. As William Shakespeare noted: “The evil that men do lives after them; the good is oft interred with their bones”.

They are a varied bunch of people, mostly business men and women, a film maker, a rugby player (who announced recently he was hanging up his boots), a chef, an inventor, a cricketer who fate delivered a cruel blow; and a man who has been at the forefront of disaster relief in most parts of the world.  They all have one thing in common, that, clear decision-making leads to success.

At the end of each interview there are “takeaways” that will give you food for thought. The boss of Discovery, Adrian Gore, says that,” There is a need for ego if you’re going to be successful.” Imtiaz Sooliman, founder of Gift of the Givers, says that “successful people should find that small sliver of light or the silver lining.” Much capped Springbok Bryan Habana believes that, “Successful leaders help those around them spread their wings.”

Vic Vermeulen who could have been running on the cricket fields of the world with the likes of Shaun Pollock but was left a quadriplegic after a swimming pool accident, is the eternal optimist. “The more I help others, the stronger I feel.”  And his view of success. “… It’s about approaching enormous challenges one step at a time.”

The chef is Khojane, who owns and runs an Italian restaurant, Gemelli, in Johannesburg’s mink and manure belt which may seem odd for someone who grew up in Bloemfontein and Lesotho. It’s not. Khojane started out as a waiter in Durban where his passion for food was stoked. And his takeout: “Successful people think ahead and that minimises risk.”

Nicky Newton-King, one of two women interviewed, is the chief executive officer of the Johannesburg Stock Exchange, believes that “Success means having tough conversations but they must end in mutual respect.”

The interviews, with the exception of one, tech innovator Vinnie Lingham, were conducted under the glaring lights of a television studio and each guest was asked 20 questions including what they think success means.

Maggs in his Postscript writes that he learnt a few lessons from the people that feature on the pages of Win!, among them that successful people smile more often than others: that from Jabu Mabuza, a disruptor of note and the chairman of Telkom, and from film maker Anant Singh, he learned that one of the pathways to success is shut up more and listen intently.

Interestingly enough Maggs writes that the most important lesson he  learnt was from his brother Andrew, an inveterate long distance runner. After Maggs had run a marathon in 1987, the only one he ever did, and complained what a horrible experience it had been Andrew told him, “Real benefit and change take time to percolate and you will eventually see the value of what you have accomplished.”  Andrew Maggs was right and Jeremy Maggs uses “that tough physical experience when faced with massive adversity”.

Sound advice about success doesn’t always come from the rich and famous.

We can also learn something from the people Maggs interviewed including Ryan Bacher, the founder of Netflorist, who believes that success is “defined by offering value to customers, staff and shareholders”.