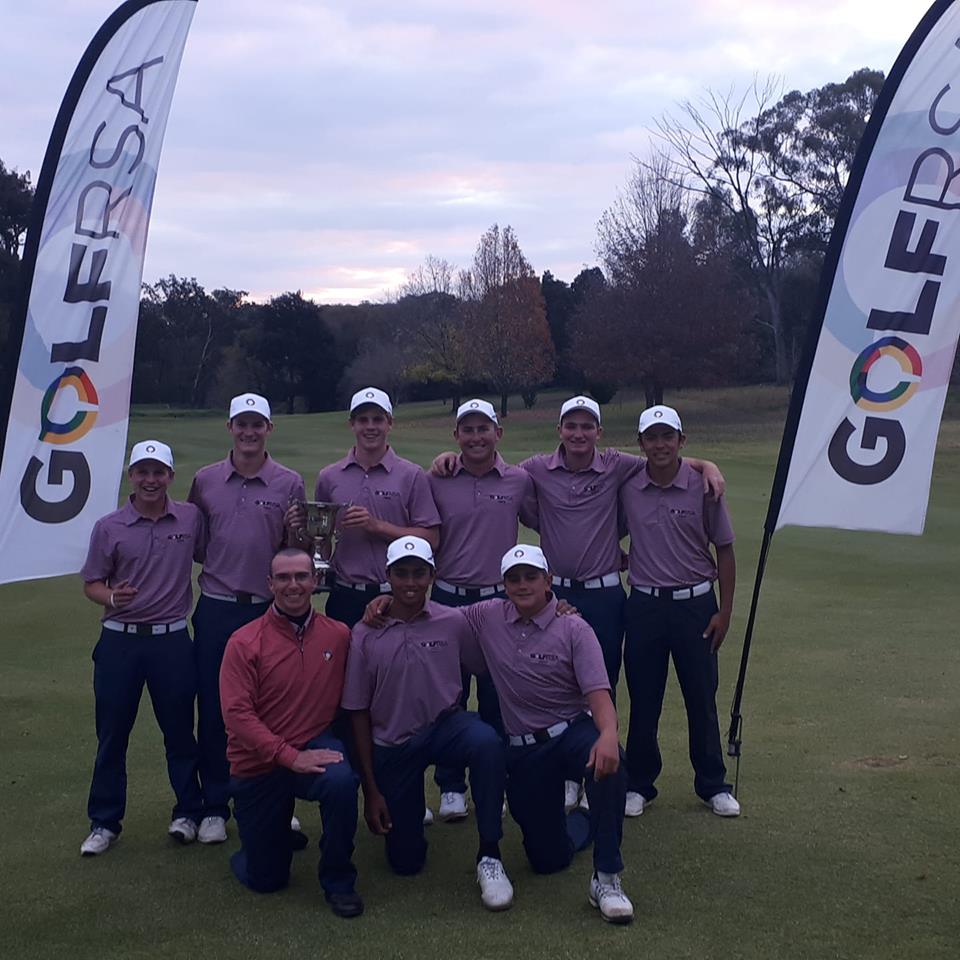 18 May 2018 – The GolfRSA Juniors closed out an unbeaten run at Irene Country Club to sweep to a fourth victory in the SA Challenge Cup after beating Western Province on Friday.

Over the last four years, the popular team event had gone right down to the wire.

But the GolfRSA Juniors were the odds-on favourites to lift the title this year.

The youthful team banked six points in the first three rounds with 9 – 3 results against Gauteng North, University Sport South Africa (USSA) and Central Gauteng and they rallied with seven points in the Singles against the GolfRSA Presidents team to win 8 – 4.

“We topped the log with eight points with a two point lead going into the final round against Province,” said team captain Martin Vorster. “Our biggest goal for the last match was to finish the week unbeaten and every guy on the team did his best to make it happen.”

The two teams were tied at 2-all after the Foursomes, but it didn’t take long before the GolfRSA Juniors took command.

Sean Howell took out number eight Yurav Premlall from Ekurhuleni 3 & 1 to square the match, but the writing was on the wall when number one Bradley de Beer from Southern Cape defeated Luca Filippi 3 & 1 and Ekurhuleni’s Saul Moss edged out Freddie Spencer 2-up.

Vorster, playing at three, delivered a captain’s innings on the last day. The Louis Oosthuizen Junior Golf Academy member sealed the final point for a 7.5 – 4.5 win with huge support from his team mates when he beat Ayden Senger 2-up at the final hole.

The GolfRSA Junior team wrapped up their fourth title in the 16th edition of the event with 10 points, and a four point victory over USSA and the GolfRSA Presidents Team.

“The team had a modest credo and strategy for the week,” said team manager David Younge.

“There is no I in team, so every shot you play, every birdie and every point is for the team. They really played for each other and shared in the responsibility. There were no stars, just eight champions who did everything they could for each other to win the title.”

Although the GolfRSA Presidents team beat USSA 6.5 – 5.5 in the final round to match USSA with six points, the SA University side clinched second in the final log by a mere half a games point, with 30.5 to 30 games points.

“There was immense talent on display this week and the team knew they needed to bring their best game to the golf course in every round,” said South African Golf Association Vice-President Naadir Agherdien, who managed the GolfRSA Presidents Team. “Unfortunately, the matches drawn against Central Gauteng and Western Province came back to bite us on the final day.

“However, this is undoubtedly the most talented crop of Presidents Team players we’ve fielded in years. The performance of Jordan Duminy, Carl Mwale, Kieron van Wyk and Nikhil Gopal over the five rounds vindicated the strategy of the SAGA selectors to include four juniors in the team for the first time.

“The experience of Siyanda Mwandla, Aneurin Gounden and Lwazi Gqira, plus the presence of Daniel Nduva from Kenya guided these young players to top performances. I am immensely proud of what the team has achieved and this augurs well for the future of amateur golf in South Africa.”

Click here to view the final Results and Logs: