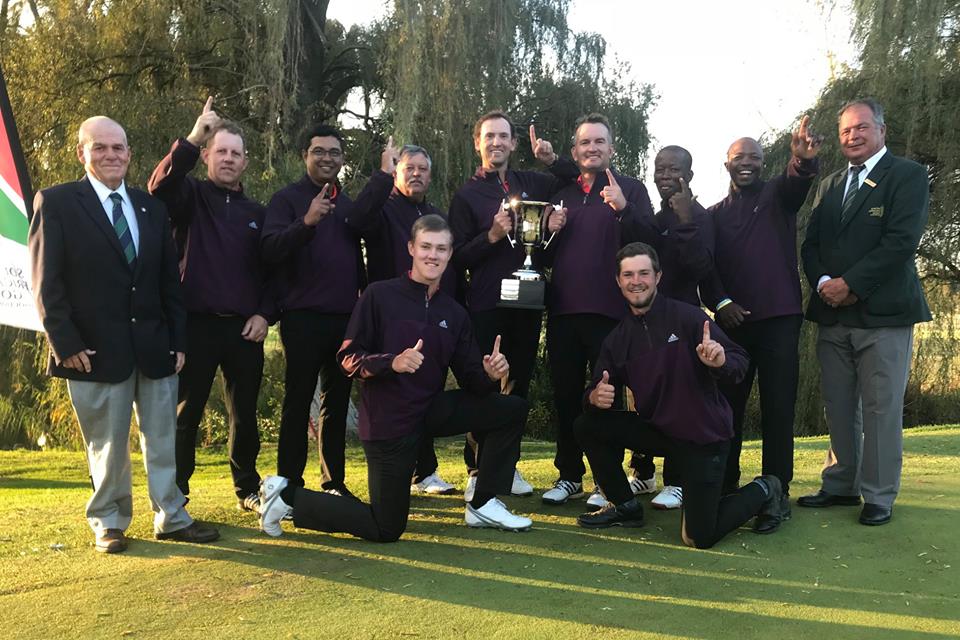 POTCHEFSTROOM, 19 May 2018 – It was the underdog’s day as unheralded Northern Cape stole the show at Potchefstroom Country Club, edging out tournament favourites Boland to clinch the promotion battle in the 2018 SA Country Districts Inter-Provincial B-Section on Friday.

Northern Cape announced their presence in this year’s tournament with a 9 – 3 victory over Eastern Province in the first round and gained confidence from a 10 – 2 triumph over Border in round two. However, it was a decisive 7 – 5 result against Southern Cape that really fired up the team.

“For the last four years, we’ve drawn against Southern Cape and we expected another really tough battle this year,” said team manager Hennie Kamfer. “They had three experienced veterans on the team and three strong rookies and we had to really dig deep in that fight. But once we got that win the in bag, the players had the confidence to face Boland.”

Smarting after their regelation at San Lameer last year, Boland made short work of their opening match and mowed down Border 11 – 1. They had a hard day at the office to get past Southern Cape, though, but managed to eke out a 6.5 – 5.5 victory to stay the course. Another decisive 8 – 4 result against Eastern Province in round four tied them with Northern Cape at the top of the log.

“Going into the final round, it was very, very close,” said Kamfer. “Boland had 27.5 games points; we had 25.5. We knew a draw was out of the question. We had to win outright to get the promotion. After losing out to Limpopo last year, the guys weren’t going to let that happen again.”

NJ van der Walt and Allan Toy made it two for Northern Cape when they took out Daniel Cronje and Ethan Smith 4 & 3, but Anton Pieters and WP Botha closed the gap when they knocked out Basil Nortje and Andries Kori 2 & 1.

“Nico (Jacobs) and I had a chance to take the last game, but I missed a two-footer for birdie and we finished all-square,” said Deon Kruis. “I was so worried that it would come back to haunt us, but our middle order saved the day once again.”

WP Botha gained a point for Boland to level the score when he beat Nortje 4 & 3, but Kori, Toy and skipper Jacobs hit back with 3 & 2 wins to take back the advantage for Northern Cape. Boland number one Ethan Smith dispatched Kruis 4 & 3, but Van der Walt sealed Boland’s fate.

Daniel Cronje birdied 10 and 13 to go 3-up, but he opened the door for the Hartswater amateur with three successive bogeys at 15, 16 and 17. Van der Walt, who made nine straight pars down the back, won the game 2 & 1.

“NJ gave us the 6.5 we needed for the win, but Drikus drove the victory home when he beat Lauritz Loubser 1-up at the last” said Kamfer. “We came into this tournament with the greatest respect for our opponents and we never took anything for granted. I can’t express how proud I am of these eight players. They really stepped it up and you could sense their confidence growing as we progressed.

“In past years our combinations let us down, but this year we got the strategy right and we started every match strong. Hats off to NJ and Allan, who shared the Most Valued Players honours on 7.5 points. They really were at the heart of the team at three and four, but this was a total team effort. There were no stars, just eight champions who punched above their weight and no one finished the week with less than four points.

“I would like to thank the Northern Cape Golf Union and all our fans for their incredible support this week. We are a small union with around 1 800 players. We came into this as the underdogs and left as the winners and we hope that this performance will inspire our juniors to reach for the stars.”
Southern Cape were on the losing end in the final match on the last day, going down to Eastern Province 6.5 – 5.5.