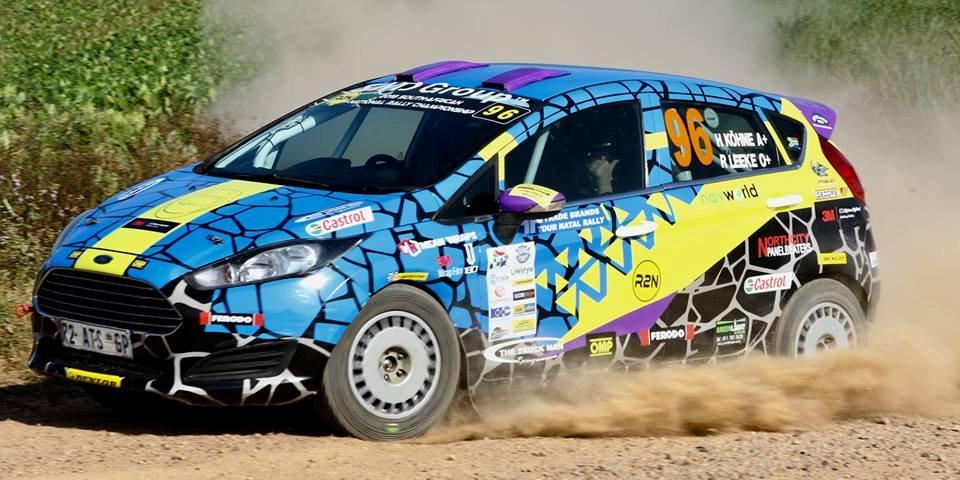 Brian Joss – The Young Guns in their Speedglass Welding Helmets Fiesta head to the Rallystar Rally on Friday – round three of the South African National Rally Championship – with a slight sense of déjà vu.

Their 2017 campaign – in which they eventually finished as runners-up – started in similar fashion to the 2018 one…they had a great result in the cane fields KZN (finishing second) and then a bit of stumble in the forests of Mpumalanga where they were classified sixth in the R2N class despite rolling the car. This year the tally is an overall win and a DNF…the recent York Rally saw them drop out with a mechanical failure.

“After the thrill of winning the opening round the retirement on the York was doubly disappointing,” admitted Richard Leeke. “We were going pretty well and tackling it with a long-term approach, being as it is the longest on the calendar. The suspension failure on Day Two put us out of the running for good and ended what was a trying rally….”

But Leeke and co-driver Henry Köhne, well-known for their positive attitude and determination to have fun from their racing, have put it behind them and approach the Rallystar Rally at the new venue, the Sun Carousel, in the North West Province, near Pretoria, with their usual confidence.

“On our day we’re as fast as anyone, so it really is about reliability and being able to cope with the pressure,” says Henry, who will sit alongside Leeke for the 32nd time this weekend. “The rally is all-new in terms of the stages and venue so it’ll be a real test for everyone!”

The 2018 season already has the potential to be something of a humdinger and despite the relatively small field, there’s no shortage of talent at the sharp end. There are numerous competitive crews and three well-established rallying brands in the mix too. Unusually, two crews share the first position and two more (including the Young Guns) are joint second…

“We will definitely approach the event with renewed determination,” says Leeke. “We’re looking forward to visiting the new Rallystar venue. There’s a mix of short stages, including tarmac ones at the Sun Carousel – which have traditionally suited us well – and long dirt stages on fast farm roads. With only seven stages in total it will only take one error to blow it, so we’re going to be on our best behaviour and intend remaining 100 percent focused for the two days!”

CAPTION: Richard Leeke and Henry Köhne: tearing it up at York before dropping out. Picture: Motorpress