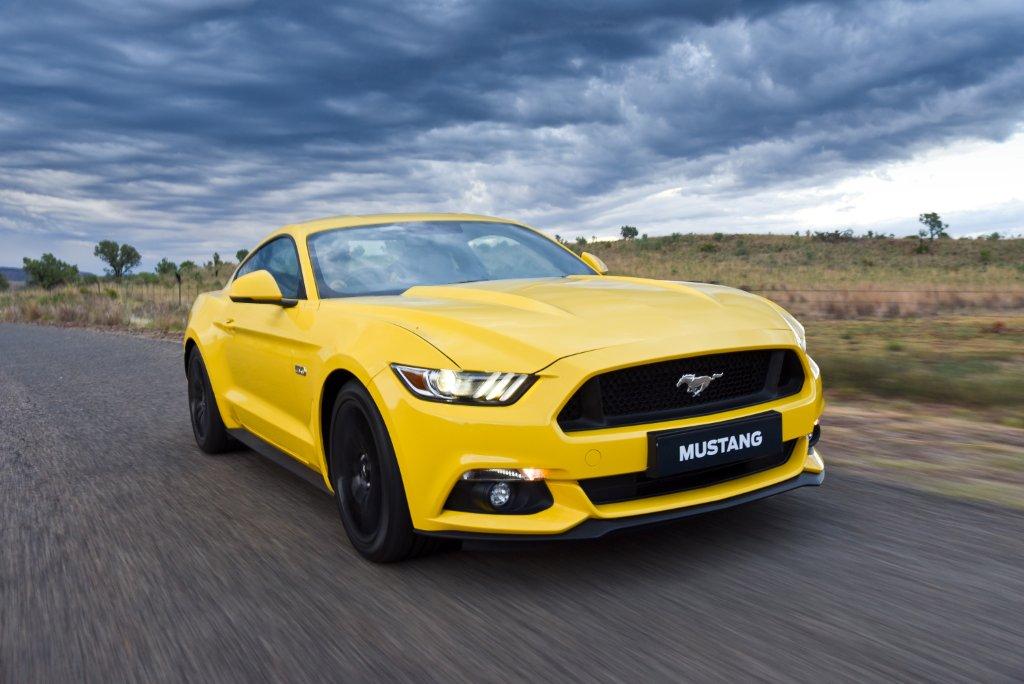 Brian Joss – When my son sat in the driving seat of the Ford Mustang the grin on his face was priceless, as they say in the ad, and when he pushed down on the throttle a few neighbours peered through the curtains while others rushed outside to see where the source of the deep and satisfying gurgle was coming from.

Of course, there were lots of oohs and aahs, especially from the would-be boy-racer down the road.

I have been waiting a long time to get behind the wheel of the iconic car which was launched in South Africa at the end of 2015 to the delight of “Pony” aficionados around the country. But when the Ford Mustang, top-of-the-range five-litre V8 GT convertible, rolled into my driveway last week, without any fanfare, it met all my expectations, and then some.

I had to use considerable willpower not to put the pedal to the metal: before you blink, the needle goes beyond the 120km/h limit and at that speed the roar of the Mustang is like a symphony on wheels. Even at 60km/h the Pony seemed to be flying,

Fans will recognise the design elements that made the Mustang a stand-out vehicle. It has a long sculpted hood and a short rear deck. Other features include its low roof height and wide stance, the steeply sloped windshield and rear glass, the signature trapezoidal grille and shark-bite front fascia and the three-dimensional tri-bar tail lamps.

A party trick that was a hit with friends and family was the projection of the Mustang logo onto the floor which comes into play when you unlock the doors.

Although the convertible has two bucket seats in the rear it’s not a car built for four. The backrests can be pushed back but then the passengers’ heads will be squeezed beneath the rear windshield. Or, you’ll have to sit with your knees against your chin. To say that space is limited is an understatement. You could probably fit two golf bags into the 332-litre boot space.

The V8 is fitted with a six-speed SelectShift automatic transmission as well as paddle shifters.

It’s easy to operate the soft top of the convertible. Keep your finger on the overhead button to open or close it. It lowers in seven seconds and raises it in ten. There is also a lever that you twist to keep it securely fastened. Inside, the cabin has some nice touches including steel toggle switches that you use to perform various functions like cooling or warming up the seats. The Mustang is also packed with technology. You can use the toggle switches to adjust steering effort, engine response and electronic stability settings when you’re driving on any of the other twisty passes in Cape Town.

The drive to Hout Bay on Kloof Nek Road through Camps Bay proved an easy trot for the Mustang. Using the Selectable Drive Modes, you can also adjust the automatic gear-shift patterns to match driving conditions: normal, sport+, track or for snow, which is probably superfluous in the South African context, and for wet weather.

If you’re going to take the Mustang for a gallop on the track, I didn’t, because the rigmarole to get permission is onerous, there are track apps that you control through the steering wheel and the instrument panel will show an accelerometer, acceleration timer and brake performance, which measures braking time and distance from a set speed, Ford said.

Large, clear instrumentation puts vehicle information right in front of the driver in the roomy cabin with an aviation-inspired cockpit, while ergonomic and tactile switches and knobs provide intuitive control. According to Ford, the vehicle’s width contributes to impressive shoulder and hip room, for people in the front, but not in the rear.

In my view, the bean counters were at work on the inside. The plastic material used is definitely not up to the standard offered in other Ford products. The plastic bits, feel, well plasticky.

The 5- litre V8 engine uses sequential multiport electronic fuel injection and variable camshaft timing to produce 306kW of power, along with a massive 530Nm of torque and it takes 7 seconds to get from 0 -100km.h. For interest’s sake the Fastback manual does it in just 4.8 seconds, Ford said.

I’m not going to discuss the complex features of the V8 otherwise we’d just get bogged down in techno-speak.

However, the grille is an interesting development. It acts as an inlet for air that cools the engine.

Allowing air to flow through the engine bay instead of directing it around the sides and over the top of the body which increases drag. The grille allows only as much air as the engine needs.

Ford’s design team adopted a pioneering approach for the new Mustang, giving it the first Ford application of wheel aero curtains. Vertical slots in the outer edge of the front fascia channel air from the front of the car to openings in the wheel wells, directing it across the outer surface of the wheel and tyre. The wall of high-speed air works much like a skirt to reduce drag.

The Mustang was never meant to be an out-and-out performance car. But its got loads and loads of voomah. The Pony is ideal for cruising; the automatic gearbox is quite leisurely; the car corners well and sticks firmly to the tarmac; it’s also nimble enough to dart in and out of traffic.

However, don’t expect it to sip petrol. In a town and country cycle, I recorded figures of 15litres/100km. I kept to the legal limit most of the time: just a touch of the accelerator will push you straight into the all-seeing camera lenses of Big Brother. I relished the way the Pony used the torque to the rear wheels to push it forward in a surge of power. When you’re driving a muscle car everyone wants to beat you to the off at the red lights, from the small Hyundais to the BMWs.

There were some unexpected side benefits while out driving. Several pretty girls in cars next to me gave me cheery smiles and waves, while a few guys in big bakkies like the Ford Ranger and Toyota Hilux sped past just to give me the thumbs up. My ophthalmologist, a diehard Subaru fan, dashed out of his consulting rooms to get an eyeful of the Mustang and an earful of the growl coming from, it keeps you smiling and makes you feel like a million bucks.

When the weather plays along you can open the top to let the sunshine in and the wind blow through your hair. Or, on a cloudless night, gaze at the myriad stars in the heavens from a suitable viewing point.
The Ford Mustang celebrated its 50th anniversary in 2015 and according to the website Mental Floss, it was introduced at the New York World’s Fair on April 17, 1964, and 22 000 of them were snapped up for $2 368. Quickly nicknamed the Pony, the Mustang name has a surprisingly complicated history.

According to designer John Najjar, he suggested the name Mustang after the World War II P-51 Mustang fighter plane. That was rejected because it was too “airplaney,” so he pitched the name again as a type of horse, and everyone loved it.

But Lee Iacocca remembers it differently. He says there was a trend of naming cars after animals, so an advertising consultant gave them a list of mostly animal names for the car. And one of them was Mustang. Whichever version is true, according to Ford Motor Company, other names considered for the car as it was developed in 1962-63 were Cougar, Torino, Allegro, and Avventura. Mustangs have always been cool cars for cinema heroes to drive, as Steve McQueen proved in the 1968 classic Bullitt. That was a 1968 390 GT Fastback that he roared through the streets of San Francisco. But the first look at a Mustang in a major movie happened in 1964, when Tania Mallet went wheel-to-wheel with Sean Connery’s Aston Martin-driving James Bond in Goldfinger.

The Ford Mustang has been upgraded for 2018, and judging by some of the images it looks a lot different to the current model. The nose has changed and the Pony features a 10-speed automatic transmission.

CAPTION: The Ford Mustang: sounds like a symphony on wheels. Picture: Quickpic