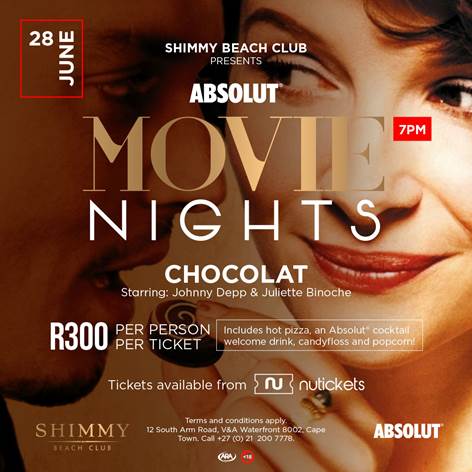 The Shimmy cinema, screening French classics like Amelie, Chocolat and Perfume: The Story of a Murderer, offers guests an elegant cinematic experience with all the bells and whistles.

Tickets are priced at R300.00, available through Nutickets and will include an Absolut Vodka arrival cocktail, Margarita pizza and the movie essentials… popcorn and old-fashioned candyfloss of course!

The Absolut lounge will be warmed up for the occasion with comfortable lounge come cinema-style seating, creating a cosy, relaxing atmosphere for Absolut movie-watching bliss.

Debuting the series of winter movies, on 28 June 2018, is the British-American romantic comedy-drama, Chocolat. Created in 2000, the five times Academy Award nominated French film tells the story of a young mother who transforms the French village of Lansquenet-sous-Tannes with her chocolaterie. The motion picture was also nominated for eight BAFTAs and four Golden Globes.

30 August 2018 will host the screening of Perfume: The Story of a Murderer. Set in 18th century France, the film tells the story of Jean-Baptiste Grenouille (Whishaw), an olfactory genius, and his homicidal quest for the perfect scent. Released in 2006 the movie.

Tickets are limited to 60 seats and are available on a first come first serve basis. Go to http://shimmy.nutickets.co.za/AMNChocolat to reserve your space and check outhttps://www.facebook.com/events/892896817585603/ for more info.