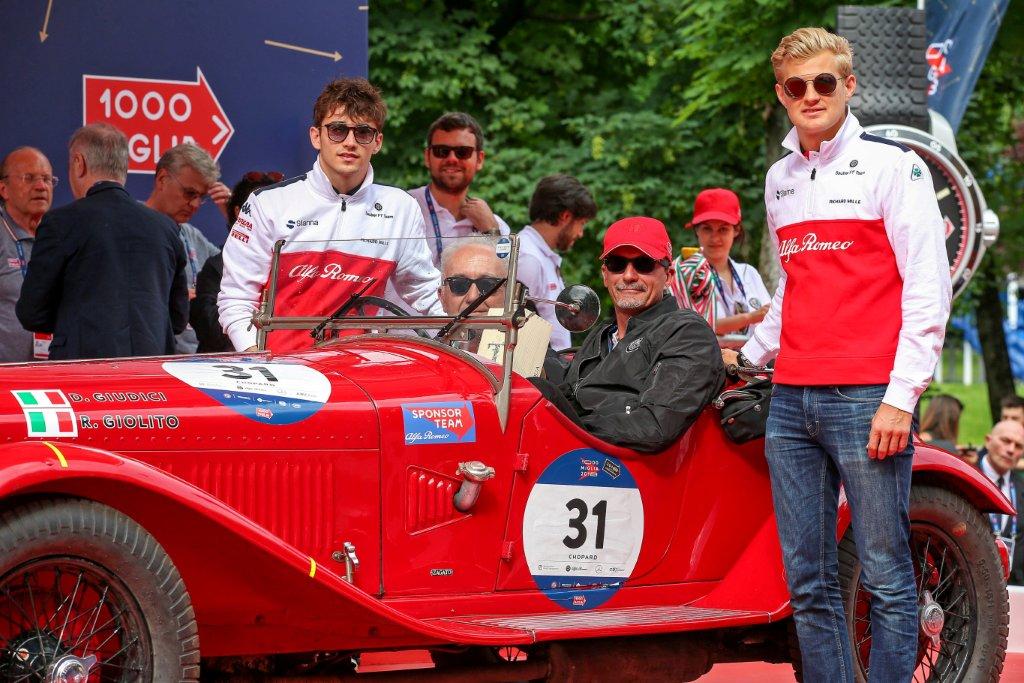 Brian Joss – Roads are inevitably transformed by the passage of the Mille Miglia, and after travelling about 1 800 kilometres, on the way home, the first sensation is one of having lost the way.

It doesn’t matter which navigator you use: without the hundreds of red signs marking the route, no road looks right. And it is surprising to see that roundabouts are no longer thronged with eager photographers, and without the cheering crowds, accelerating seems to have lost its appeal. A generous warmth, from Brescia to Rome and back, in every square and outside every door, groups of people flocking to watch the race, year after year. Eyes trained on the “travelling museum”, countless camera flashes and praise for the Alfa Romeo cars in the official fleet, supporting the event.

It is certainly not every day that one can get a close, first-hand look at a Stelvio Quadrifoglio, a showcase of Alfa Romeo excellence, the SUV that powered round the Nürburgring circuit in 7 minutes 51.7 seconds, the lowest time ever in its category. Quadrifoglio: one word is enough to identify a car in a class of its own, that defies all normal categorisation. And the first SUV that is also an Alfa Romeo is quite at home between the two lines of crowd, delighted by the hypnotic roar of the 2.9 V6 Bi-Turbo, a promise of the power just waiting to be unleashed. Leaving Parma in the early morning, the Mille Miglia roused a drowsy Saturday morning in the Po Plain and on the gently rolling roads from Fidenza towards Salsomaggiore. Then a parade in Piacenza, on Piazza Cavalli: there were 510 Stelvio and Giulia Quadrifoglio cars present, and the square could hardly hold them.

At San Rocco al Porto the Mille Miglia bade farewell to Emilia Romagna and entered Lombardy, the region where it was conceived and became reality. A bond which is even stronger and deeper this year, consecrated by the spectacular passage through Milan, across a packed, astonished Piazza del Duomo. A lot happens in Milan, a town that has seen it all – but not the Mille Miglia, which brought a new thrill to the city. So many ingredients, all together, and so many “firsts”. Leaving behind the considerate traffic on Viale Certosa, the race caravan paid a celebratory visit to the Museo Storico Alfa Romeo at Arese, where time trials were held on the internal circuit. Marcus Ericsson and Charles Leclerc, the drivers of the Alfa Romeo Sauber F1 Team, were also present, driving a 1932 Gran Premio Tipo B and a
1955 750 Competizione.

The two drivers Marcus Ericsson and Charles Leclerc also greeted the public from the stage at Brescia. Alfa Romeo triumphs ninety years after the brand’s first victory in the Mille Miglia, also celebrated by the “Alfa Romeo: the Mille Miglia in 90 places” project.

The 2018 Mille Miglia was won by the Alfa Romeo 6C 1500 GS Testa Fissa crewed by Tonconogy-Ruffini. In second place, just eight penalty points behind the victor, the stunning 6C 1500 Super Sport dating from 1928, with coachwork by Stabilimenti Farina. This was an official car from the FCA Heritage collection, which is normally on display at the Museo Storico Alfa Romeo, driven by Giovanni Moceri with co-driver Daniele Bonetti. In third place, the Alfa Romeo 6C 1750 SS Zagato of Vesco-Guerini.

All the Alfa Romeo cars entered by FCA Heritage finished in very creditable positions, and all concluded the 36th historic re-evocation of the Mille Miglia by completing the traditional Brescia-Rome-Brescia course. The ranks of the official Alfa Romeo team included racing professionals and internationally famous artists, all united in the love of classic Alfa cars.

They included Coldplay bass player Guy Berryman with driver Derek Hill on board the 1900 Sport Spider from 1954 and Roberto Giolito with David Giudici in a 1930 Alfa Romeo 1750 GS, while Paolo Spalluto and Ottaviano Checchi drove a 1900 C SS Touring from 1956. Not only this, distinguishing themselves in an Alfa Romeo there were also Axel Marx, who can boast a prestigious collection of hundreds of vintage Alfa Romeos, together with Fabrizio Buonamassa and Piero Pelù with his partner Gianna Fratta, one of the best known and highly regarded orchestral directors at an international level. The presence of the Florentine singer and musician understandably unleashed the enthusiasm of the crowd, which surrounded his Giulietta Sprint from 1955 at each passage. His car, which was recently meticulously restored, has received the Alfa Romeo Classiche “Certificate of Origin”, a document containing the production specifications of the specific chassis number, as in the manufacturer’s own production records.

So, we can archive an exceptional edition of the Mille Miglia, which has further consolidated the bond between the “Red Arrow” and Alfa Romeo, if that is possible. As overheard from the voices in the stand next to the podium, more than ever, this year we can say that “Alfa Romeo is Mille Miglia, and Mille Miglia is Alfa Romeo”