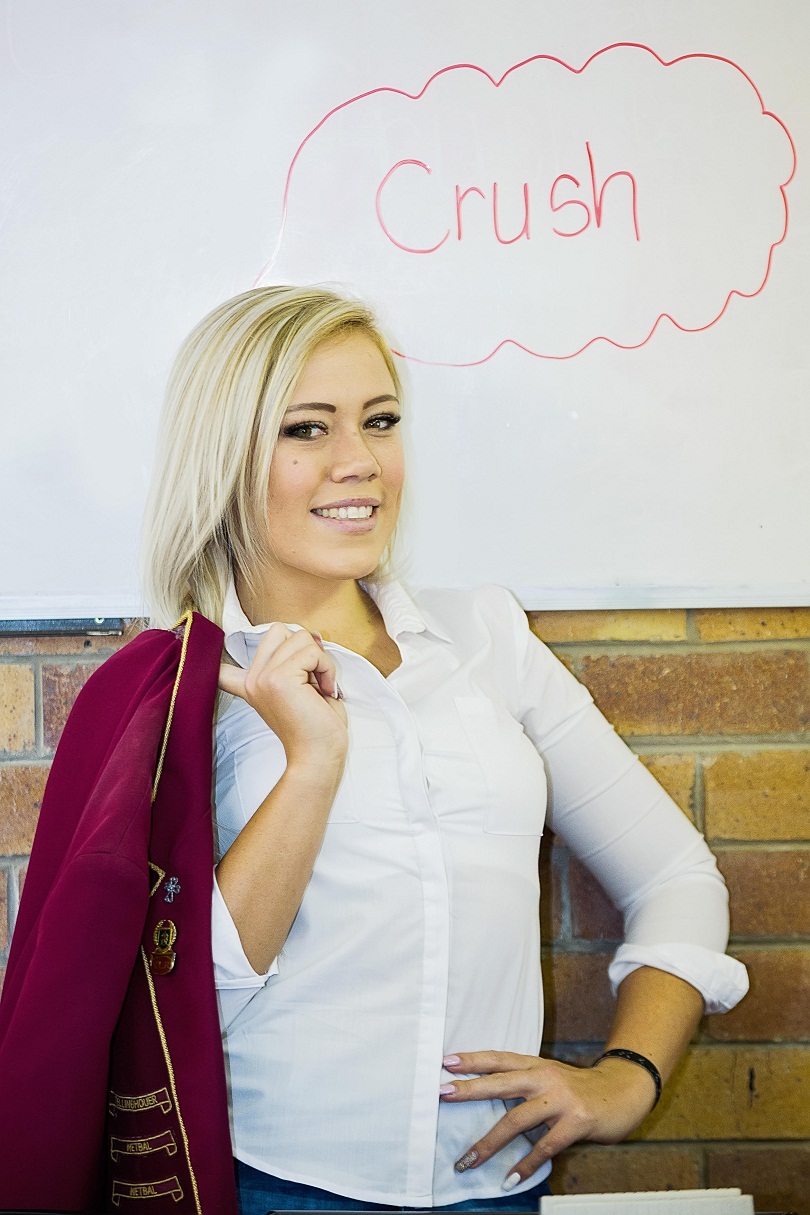 South Africa’s favourite bubbly blonde, Sharoney, is back with a brand new single that will undoubtedly win the hearts of listeners of all ages.

“CRUSH is a typical ‘high school girl’ song. Every girl knows what it is like to be in love. Especially in school. Sometimes the guy in question remains your ‘crush’ long after matric. You get butterflies just thinking about him, you blush when he speaks to you and you can’t help smiling when you see his name,” says the singer about the track, which was written by Hugo Ludik and Kyle Grant. “The song immediately appealed to me because I had a crush on someone when I was younger. It describes so beautifully how I felt at that time, but back then I didn’t have the rights word to capture those feelings.”

The track offers the same rhythmic pop that the singer is known for, and invites you to spontaneously sing along or take a turn on the dance floor. “I would love it if listeners could experience that same feeling the songwriters and I did; that they would take a moment to reminisce while enjoying the song,” she says.

A music video of the song will also be filmed shortly and Sharoney is beyond excited to share it with the world. “Fathom Media will again be involved in the production, which will be filmed on location at a school. I was personally responsible for the concept and used my own experience as inspiration. It tells the story of the most popular guy in school, every girl’s dream boyfriend, and the plain girl who is always just there. She stares at him and can only dream about the future. What unfolds next is like a fairy tale. Will the princess get her prince? We’ll have to wait and see…” she shares excitedly.

CRUSH is the second release off her latest album, Skyn, which was nominated for a 2018 Ghoema Award for Best pop album by a female artist. The titular track was well received and reached the number one spot on Lekker FM’s hit chart. It also spent several weeks in the top ten on Bosveldstereo’s Afrikaans Top 20, the kykNET Top 20 and VCR’s Baanbrekers. The music video is still shown quite often on television.

Sharoney officially joined the music scene in 2014 when her first single, Een Keer, which was written by ADAM’s Hugo Ludik and Reynardt Hugo, started climbing to the top of the charts within days of its release, where it stayed for some time.

Her debut album, In Ons Fairytale, was released shortly thereafter. It too, was an instant success and earned her two Ghoema nominations (Newcomer of the year and Best pop album by a female artist), as well as a Huisgenoot Tempo nomination (Newcomer of the year) in 2015. Prinses, her second single penned by Hugo Ludik and Reynardt Hugo, was also very popular and received substantial radio and television airtime. The third and fourth singles, Fairytale and Wees My Held, followed. These songs secured her spot in the hearts of listeners and helped build on the success she had already achieved.

When she is not on stage, she is involved with the charity initiative Dare To Care, which reaches out to people and organisations in need. The star, along with one of her sponsors, Katoenkind, is currently working on designing her very own Sharoney T-shirt.She also just announced that she will be part of the Bokboot concert in 2019. In addition, her version of MercyMe’s gospel hit, I Can Only Imagine, was recently released as part of a challenge to market this international film in South Africa, and has been very well received.

Listen to it here: https://www.youtube.com/watch?v=ZJPVaUmOF_c

CRUSH is the perfect song for any get-together or party and is one that girls, particularly those struggling with the same feelings, will no doubt listen to on repeat. It is Sharoney’s seventh single and a wonderful testimonial of why she is so popular in the music industry.