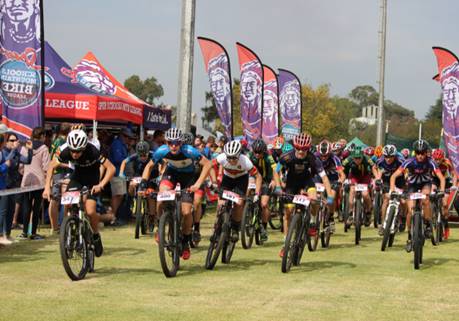 The Spur Schools MTB League is on an upward trend and the 2018 season got off to a bumper start, recording more 1 000 rider entries, 3 314 laps and 10 550 kilometres across three participating regions.

Young MTB buffs saddled-up and took to the trails in the Southern Cape, Gauteng and North West for the first three events of the new season and there’s more to come before the League finale in October.

“This is exactly how we wanted to kick-start the season, with a bang. The numbers speak for themselves and shows that schoolgoing children are taking a keen interest in MTB, which is what we want,” says Deon Steyn race director for the Gauteng region.

The Gauteng event was hosted at Phoenix High School, with 692 participating riders, clocking in 2002 laps for the day and 10010 kilometres of mountainous terrain. Steyn says due to the high interest, organisers split the event from four into six to accommodate all entries. The top five participating schools are: Afrikaans Hoer Seunsskool (1); Garsfontein High School (2); Menlo Park High School (3); Transvalia High School (4) and Midstream High School (5).

“Our first race of the season was an absolute winner and shows that hard work really does pay off. In 2014 we had 39 riders, fast-forward just four years and we’ve seen this unbelievable increase, it shows tremendous growth in the sport,” Botes says.

Meanwhile at Wagpos High School in the North West, the 233 riders made the most of race one of the season, clocking in 592 laps and 3418.8 kilometres. Steyn, who doubles-up as race director for this region as well, says the success of this race sets tone for upcoming races in the province. He named the five top participating schools as: Rustenburg High School (1); Wagpos High School (2); Wesvalia High School (3); Potchefstroom Gimnasium (4) and Hartbeespoort High School.

“Seeing the sport grow to this level is rewarding, knowing we are reaching our goal is fulfilling. But it doesn’t stop after the first event, we encourage more kids across the country to enter the League to contribute further to its success,” Steyn says.

This year marks 10-years since the League’s inception. It’s developed from just 1 590 rider entries and 115 participating schools in 2009, to 12 722 entries and 496 schools in 2017. And 2018 will be no different; the League should see a 20-30 percent increase in rider entries when compared to last season. The Spur Schools MTB League is the country’s largest high school cycling programme and the main nursery for talent in the sport.

For more information on results visit www.spurmtbleague.co.za and find your region under the How to Enter tab.

The Spur Schools Mountain Bike (MTB) League was launched by Spur Steak Ranches and Amarider in 2009 and celebrates its 10th anniversary this year. This sporting initiative provides regional and national structure in MTB at school level and has stimulated event-planning in many regions where the sport was inactive. In the past decade, the League has developed exponentially and to date attracts close to 13 000 entries from 500 schools annually. This statistic is expected to see another drastic increase this year as more schools look to be included in what is one of the largest schools MTB programmes in the world.  In order to grow a stable base in South Africa for a fast growing, international competitive sport, the League seeks to introduce more learners to MTB and encourages South African schools to adopt mountain biking as an official school sport.  And while mainly focused at high school level, the League does allow for primary school participation in selected regions to help grow a feeder system for the League.

The Spur Schools Mountain Bike League, with continued support from Spur Steak Ranches has managed to build a strong cross-country racing format, with events taking place in each province between May and September. For more information, please visit www.spurmtbleague.co.za