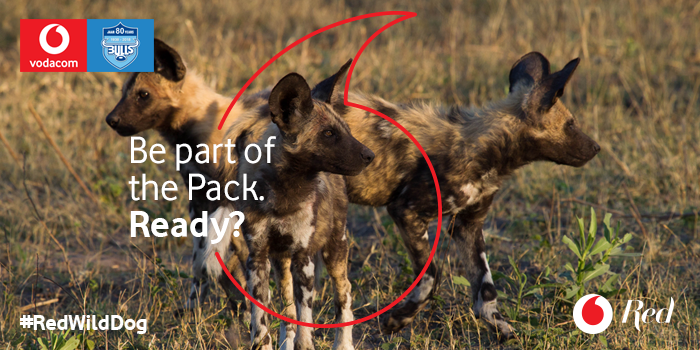 From sharks that send a Tweet to bathers warning them of their presence to cutting-edge data collection on animal populations and habitats, technology is fast becoming the biggest weapon in the conservation efforts to protect some of the most endangered species on the planet.

It’s a move that delights Arthur Goldstuck, South Africa’s leading expert on technology trends, who in June will join a unique conservation effort in the Kruger National Park with South African rugby players and led by Vodacom, and which could result in groundbreaking research on the wild dog.

According to the World Wildlife Fund (WWF), the African wild dog – or painted dog as it is also known – is Southern Africa’s most endangered large carnivore species with only between 3 000 and 5 000 individual dogs still left in the wild, and making up between 600 to 1 000 packs.

Vodacom Bulls coach John Mitchell and several players will join a group of Vodacom Red customers who have won the right to be part of an exclusive experience in helping track and collar African wild dogs in the Kruger National Park from 23-24 June, with Goldstuck and former rugby player Joe Pietersen leading this pack of conservationists.

“What’s going to be fascinating is getting a complete digital picture of the movements, life cycles and activities of wild dogs,” says Goldstuck.

“The result of that digital picture is that we will almost have an x-ray of the brain of the wild dog community, which has never been possible before. I can imagine the nature of this data will provide incredible insights into the efforts to conserve and protect the wild dogs.”

As an award-winning IT journalist and author and the editor-in-chief of Gadget magazine, Goldstuck says technology is playing an increasingly important role in nature conservation.

“The technology available for nature conservation is far ahead of the attempts to destabilise nature. Drones are being used to fight poachers in the Kruger National Park. Remote camera traps are being used not just to monitor species but also rediscover species. I have even read of a GPS device that Tweets a shark’s location to nearby bathers. And crowdsourcing is also entering the conservation sphere in the form of a crowdsourced bio blitz where everyone visiting a particular reserve or park is involved in gathering information on every single species they spotted in that environment. It’s incredible the range of technology available to nature conservation. So there is no longer an excuse to not use the latest technology in nature conservation.”

But Goldstuck says some of the challenges to more effective use of technology in conservation are a willingness and ability of those at the forefront of conservation efforts to use this technology, and the need for a more integrated approach throughout South African conservation.

“The problem is the readiness to use the technology as a solution and the ability of people involved in conservation to use this technology. But the fact that you can now do courses at South African universities in the use of technology in conservation is a positive step towards overcoming this.

“I’m seeing a very strong coming together of technology with conservation, especially with rhino projects. But I think the challenge is to make these isolated incidents more integrated across all areas of conservation.

“In the next five years I believe we’re likely to see big leaps forward with organisations like Vodacom possibly joining forces with other companies to develop a more integrated strategy across South African conservation.”