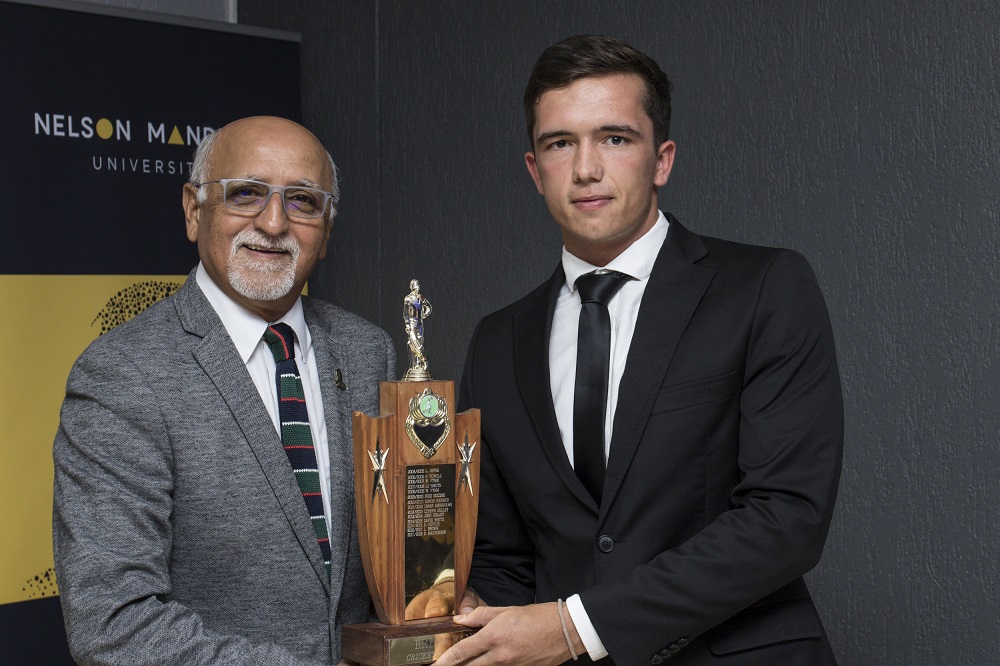 David Masterson was named the player of the year when the Madibaz Cricket Club annual awards function was held at Nelson Mandela University in Port Elizabeth last week.

The talented young batsman had an outstanding season for the club, scoring consistently throughout the summer.

This resulted in him reaching an aggregate of 547 runs at an average of 68.37 during the season, culminating in him being chosen for the Warriors Academy team.

“He serves on the club executive committee as vice-chairman,” he said.

“Thanks to his batting he played an instrumental part in ensuring that Madibaz reached the final of the University Sport South Africa tournament in October last year.

“He was also part of the Varsity Cricket squad, where Madibaz finished fifth.”

Masterson said he knew there were areas in which he could improve his game.

“I feel that I did not have a good Varsity Cricket week, although I think I did receive some good balls and was unlucky at times,” he said.

“However, I need to work on the short ball when facing quicker bowling.

“I have already changed something from then to now, which feels as if it is helping me a lot.”

Mieke de Ridder was named the ladies’ player of the season after being the leading run-scorer for the team.

“Her contributions to the team saw the club reach the final of the NMB Women’s T20 Mayoral Cup, where they lost against Old Grey,” said Sibande.

“She has brought in some experience and energy that have galvanized the ladies’ team.”

Fast bowler Solomzi Nqweni received the prestigious chairman’s award for his contributions to the club both on and off the field.

“He has always conducted himself in a professional and exemplary manner,” said Sibande.

“His man-of-the-match performances at the USSA tournament and Varsity Cricket week are an indication of his dedication and commitment to the club.”

Sibande said Nqweni qualified as a Legend of the Club.

To achieve this, a player must excel in both academics and sport, must have represented EP, must have played at all national tournaments (Varsity Sport, USSA, CSA Club Champs) and must have produced match-winning performances for the team.

He said the club honoured the contribution of five other players by giving them Legends of the Club status. They are Edward Moore, Lloyd Brown, Anrich Nortje, Kirwin Christoffels and Brad Dolley.

Team captain Brown was also recognised for his commitment to the cricket club by receiving the courage and determination award.

“After many seasons of being among the top run-scorers in the EP premier league, through hard work and persistence, he was finally rewarded with an EP cap,” Sibande said of his debut in November 2017.

“He is a true club man and a natural leader, full of resilience and always showing a never-say-die attitude.”

The award winners were:

Cricketer of the year: David Masterson