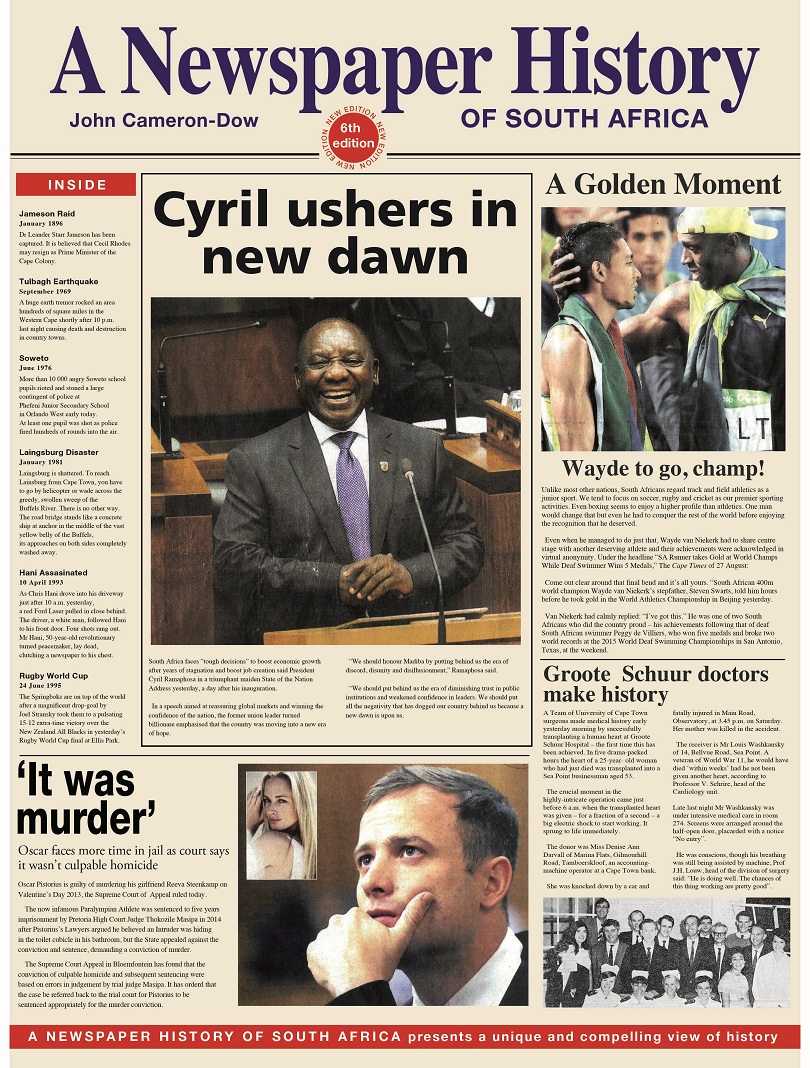 Looking back at history is always a fascinating exercise, even more so when you see what the newspapers of the day reflected. In the sixth edition of A Newspaper History of South Africa Cameron-Dow looks at the events that made headlines. It features the discovery of gold in 1886 and the election of Cyril Ramaphosa as the country’s president this year (2018). The rise of record-breaking runner Wayde van Niekerk is also recorded as is the death of rugby icon Joost van der Westhuizen and the State Capture saga.

The historic events are reflected in the pages taken from the archives of Times Media and Independent Newspapers.

It’s also interesting to note how newspaper design has changed over the years: from slabs of grey type to open pages with full colour images. Even the language used is different now.

Some of the stories that made headlines was one in the Cape Argus (November 20 2007) stating that ‘Zuma will be charged’ for fraud, that was 11 years ago, and there was a subhead ‘But ANC decides to axe Scorpions’  which goes to show how long ago the rot started.

There is also coverage of South Africa’s successful hosting of the Soccer World Cup in 2010; the Marikana tragedy highlighted on page 1 of the Cape Times (December 9 2010); the Star’s story (August 17 2012) was headlined ‘Cops go in for the kill’ and noted that 30 striking workers were slain and 86 wounded in the Lonmin mine atrocity which became known as the Marikana tragedy, the worst event since Sharpeville, when the National Party ruled the country and police opened fire on residents protesting against the dompas. Then there were the disclosures about Nklandla and Public Protector Thuli Madonsela’s report which found Jacob Zuma guilty of violating the Constitution and being ordered to pay back the money. The Oscar Pretorius trial also features, and the Sunday Times headlined it on September 14 2014 ‘Oscar judge under fire’ and on February 4 2016 the Sunday Times urged ‘For the sake of your country, Mr President Go Now!’ Fat lot of good that it did. The 2016 municipal elections also got extensive coverage and one headline read, ‘DA + EFF take Joburg’.

Athlete Wayde van Niekerk’s achievement at the Olympics was noted and the Star reported on August 22, ‘Hero’s welcome awaits’, referring to Caster Semenya who came home covered in glory.

Other events include the ousting of Robert Mugabe and as the Star reported on November 30 2017 ‘Mugabe: end of an era’. And finally, the Cape Times report on the ANC’s 54th elective conference read, ‘It’s Cyril, but …’

The cover also highlights some of the momentous moments in South African history including the heart transplant, Oscar Pistorius’s murder trial, the death of Nelson Mandela and State Capture.

There is some commentary by Cameron-Dow but the stories and the personalities involved speak for themselves.

If you’re interested in history, or even if you’re not, this volume deserves a place on your bookshelf and you’ll enjoy dipping into it if only to see how life changes, how quickly and how history repeats itself. It will also help you remember the brighter side of life in South Africa including Nelson Mandela’s release covered by the Sowetan.

Tragedies include the Helderberg, our own Watergate and the devastating Laingsburg floods. Although there is much to celebrate, the bad news outweighs the good. But that’s the nature of the newspaper business, editors still live by the dictum: if it bleeds it leads. There is a comprehensive index too.