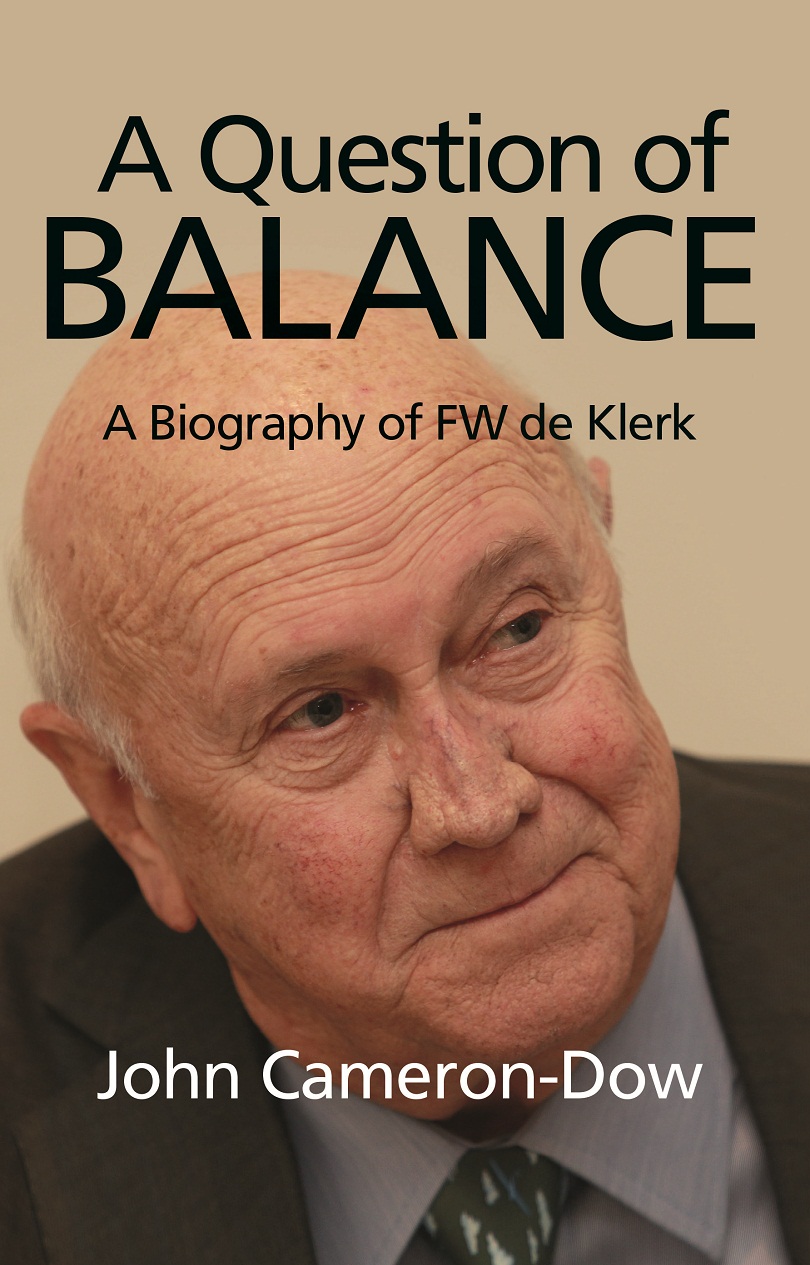 A Biography of FW de Klerk

It can’t be easy writing a biography if the subject does not want to be interviewed.

But this is the problem Cameron-Dow faced when he decided to tackle this project. Although the former president of South Africa and the man responsible for setting the “country free” did consent to answer a few questions, if necessary.

At their first meeting to discuss the project De Klerk listened intently to what Cameron-Dow had to say, and though he declined to be interviewed for various reasons: one, he had a hectic schedule, and two, he had spoken enough about his life. However, he did say that “perhaps we can find a way”, and De Klerk suggested he meet Dave Steward, the executive director of the De Klerk Foundation, which then ironically was on Hendrik Verwoerd Drive, since renamed Uys Krige Drive, Tygerberg Park, in Cape Town’s northern suburbs.

The tag line on the cover notes that A Question Of Balance is the only independent biography of FW de Klerk. Former president of South Africa who “abolished the evil system of apartheid” on February 2 1990.

In my view one of the important chapters in the book is De Klerk’s submission to the Truth and Reconciliation Commission. Cameron-Dow’s analysis is insightful and he asks four questions. Was the TRC necessary? Was it fairly constituted? Was it abused by the Commissioners? Was the effect of the TRC positive or negative for South Africa?.  He believes that that the TRC did not meet the requirements of Martin Luther King Jnr’s famous quote: “Man must evolve for all humankind a method which rejects revenge, aggression and retaliation. The foundation of such a method is love.”   Cameron=Dow’s conclusions may surprise you as will De Klerk’s submission if all you’ve read has been a truncated version.

Other issues explored in the book include De Klerk’s relationship with his father Senator Jan de Klerk who served as a minister in the cabinets of JG Strydom, HF Verwoerd and BJ Vorster. And though De Klerk holds his father in high esteem Cameron-Dow wonders about the apparent anomaly in their personalities: De Klerk senior was a die-hard Nationalist and FW, as events showed, was much more “verlig”. Incidentally, I met the Senator several times early in my newspaper career in Krugersdorp and I recall that he was a pudgier version of FW and also bald. I think he had a farm there and a school was named after him.

PW Botha’s infamous Rubicon speech comes under the microscope as does FW’s relationship with Mandela and the background to De Klerk’s pronouncement on February 2 1990 when he announced the imminent release of Mandela and the unbanning of a host of organisations.

Cameron-Dow also explores FW’s divorce, remarriage and the murder of Marike. There are some unusual insights into their marriage, including the fact that their three children were adopted. The author points out that the killer is serving two life-terms but the motive for the murder has not been properly explained. I remember that day clearly. She was found dead at her Dolphin Beach apartment, not far from where I live and that morning the police were there in force. Dolphin Beach is also within spitting distance of Archbishop Desmond Tutu’s home in Milnerton.

Cameron-Dow has done an excellent job on A Question Of Balance. It deserves a place on your bookshelf. It is an independent biography and as such is untainted by family bonds or bias.

But the last word goes to De Klerk, who on his 80th birthday said: “So the view from my balcony in Fresnaye remains positive. We can see the storms surging in from the North West but we have learned that they will be followed by sunshine and that South Africa will remain a land of hope.”