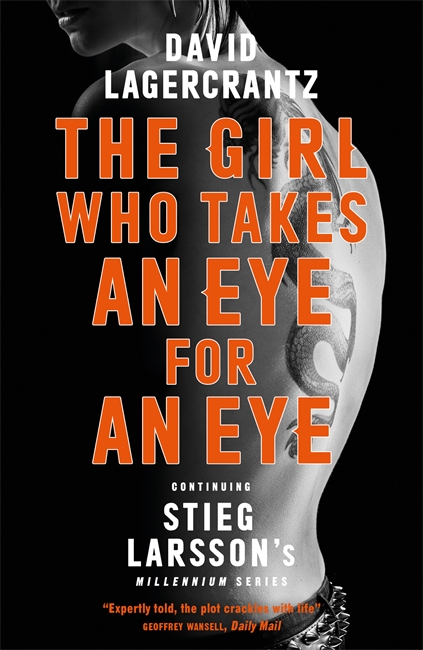 It’s a good thing that Lisbeth Salander didn’t die with her creator, Stieg Larsson and fortunate that the family selected Lagercrantz to carry on his legacy.  The Girl Who Takes An Eye For An Eye is the second in the Millennium Series written by Lagercrantz: the first one was The Girl In The Spider’s Web where the genius punk hacker had to protect an autistic child, August, an extraordinary talented artist and mathematician who witnessed the murder of his father, Professor Frans Balder, an expert in artificial intelligence.

Now in The Girl Who Takes An Eye For An Eye, Salander is in Sweden’s Flodberga women’s prison for using any means necessary to save the savant. She has been sentenced to two months after refusing to say anything in her defence. Her old pal, journalist Mikael Blomkvist, editor of the investigative magazine, Millennium, visits her every week and in return she gives him a lead which could turn in to a major expose.  With Salander in Flodberga is Faria Kazi, a beautiful young Bangladeshi woman who has been convicted of murder, after she rejected an arranged marriage, and because she fell in love with a man her family didn’t approve of.

Now she is being tortured by Benito Andersson, a gang leader who has taken over her section of the prison. She is vicious and even the ineffectual warder Alvar Olsen is powerless against her. Holger Palmgren, Lisbeth’s friend and guardian who is ailing and at death’s door makes the long journey to Flodberga where he discloses that her name and that of her twin sister, Camilla, believed to be in Moscow where she is the leader of a Russian gang, may have been on a register at  the Institute of Human Genetics which was doing a study of twins, separating them early in life,  investigating whether nature or nurture makes them what they are. Shades of the notorious Nazi doctor, Josef Mengele.

Salander passes this information to Blomkvist and when he starts digging he opens up a can of worms and the tension moves up a notch when he tracks down Leo Mannheimer and Daniel Brolin.

The scientists at the Institute do not tell their subjects that they are twins which causes them immeasurable harm.  Mannheimer and Brolin are twins who grew up in entirely different circumstances: Leo fell in to the lap of luxury and Daniel became a musician. They are identical twins, extremely talented and both feel a part of their lives is missing and when they finally meet, they plot their revenge against the scientists, one in particular.

Palmgren is also murdered which makes Salander even more determined to exact revenge. In her eulogy at Holmgren’s funeral readers will learn more about the dragon tattoo on Lisbeth Salander’s back.

There is also a stock market crash that could be linked to Mannheimer.

Many of the characters from Larsson’s series are brought back to life by Lagercrantz and include Malin Frode who has an on-off relationship with Blomkvist; psychiatrist Peter Teleborian; Erika Berger, editor-in-chief of Millennium and occasional lover of Blomkvist; Annika Giannini, Blomkvist’s sister and lawyer who represents Salander and a new personality, Hilda von Kanterborg; who may help the journalist unravel the mystery. And Salander may find out more about the woman with the birthmark on her neck and who has been haunting her dreams for years.

Lagercrantz has done an excellent job of keeping the Millennium series alive and fans of Larsson and Salander won’t be disappointed.