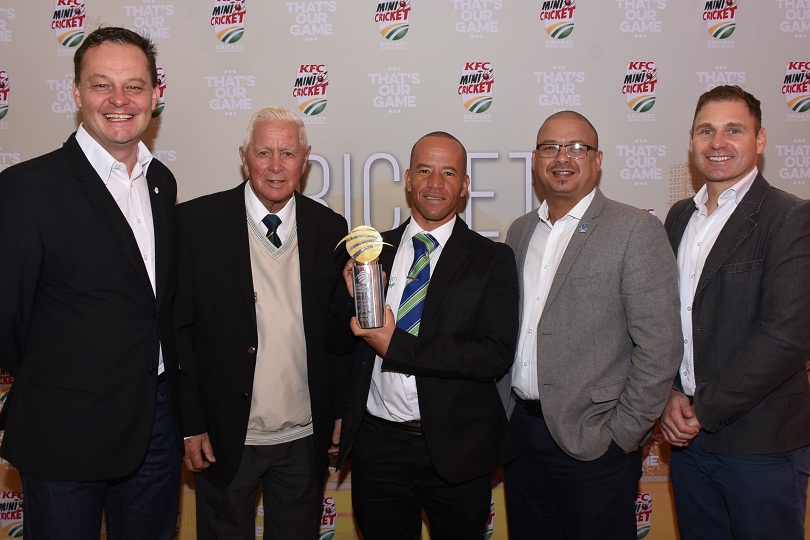 The head coach of the SWD Cricket Regional Performance Centre (RPC) , Elridge Booysen, was honoured for his excellent work when he received the Pitchvision RPC and Hub Coach award at the annual Cricket South Africa Breakfast Award function that was held at the Isando Club in Johannesburg on Saturday.

The Bridgton RPC, on of various RPC’s and Hubs which are stationed across South Africa continue to produced young, budding talent. Several players have earned selection for the respective provincial teams on took part in the past season’s Momentum National weeks. These success stories would not have been possible if it were not for the hard working coaches at these centres. There are currently 58 hubs in the country and RPC’s play in the top schools league.

Booysen, who is employed at the Bridgton RPC since 2014 will be further rewarded for his achievement when he will attend the Leaders’ Summit that will be held in Chicago in the United States during next month. In recognition for his achievement Cricket SA will borne all costs related to the summit. He is a former first class player who represented SWD in the 2006/07 season and were involved in various coaching positions in the youth structures of the province.

The RPC and Hubs program was introduced with the basic idea to create a focal point for identifying and develop cricket talent as well as schools cricket programs in communities that lack adequate cricket facilities and a widespread culture of cricket. The programmes operate in partnership with existing clubs that already have facilities. Budgets is provided every year to upgrade and maintain the facilities and to employ the coaching staff. The hubs and RPC has already become centres for fully fledged pipeline development in their own right with their primary focus on talent identification and the development of foundational technical skills.

We are indeed very proud of Elrige achievement said SWD President, Mr Rudy Claassen. “This award is a culmination of many hours of hard work and dedication by various role players to ensure the successes that were achieved and a huge compliment for our cricket development and pipeline programs in a very competitive environment” said Claassen.