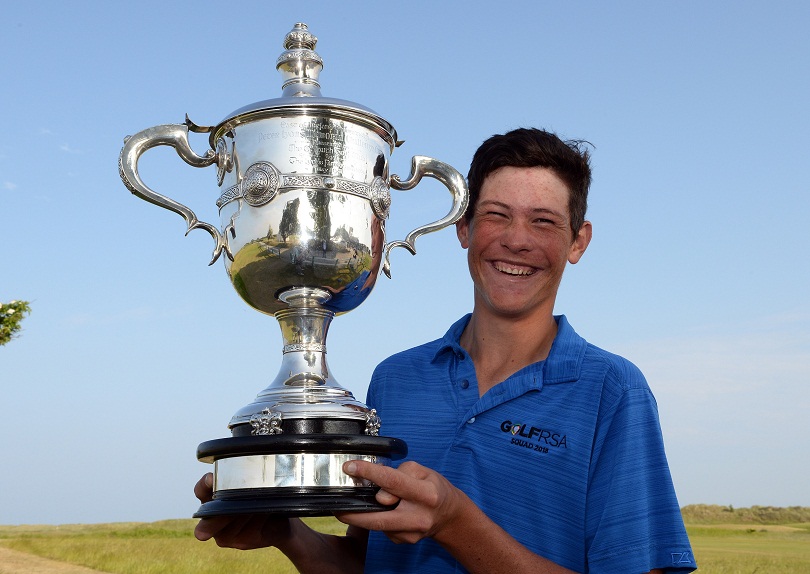 COUNTY LOWTH, Ireland (5 June 2018) – It is rare to see a young golfer capitalise on good shots, but also rebound after poor play. That is why golf pundits should keep an eye on South African Christo Lamprecht in the future.

The 17-year-old George golfer demonstrated maturity beyond his years to become the youngest-ever winner of the Sanlam SA Amateur at Humewood in 2017.

On Monday, the crowds at County Louth got an eyeful of that same blend of determination and shot-making when he became the youngest champion and the first foreign winner in the 76-year history of the East of Ireland Amateur Open Championship.

Lamprecht carded rounds of 66, 68 and 69 to take a one-shot lead into the final round. During his final trip around the Baltray Links, the GolfRSA National Squad player dropped shots and surrendered the lead. Each time he bounced back with a birdie.

Par at the final hole would have been enough to seal victory, but Lamprecht hit a spectacular chip-and-putt for birdie. A final round one-under 71 saw him win wire-to-wire on 14-under 174, with a two-stroke victory over Irish hopeful Mark Power.

“When I won the Sanlam SA Amateur Championship, it was the biggest achievement of my career, but this is right up there,” said Lamprecht, who turned 17 in January.

“I won junior events, but I’ve been struggling to break through on the Open Amateur circuit. I haven’t had a big win since Humewood and to lead from start to finish and win it, is really fantastic. I had my own battles out there this week, but I managed to flight back every time. That’s what got me to the winner’s circle.”

Lamprecht bogeyed the second and fifth holes, but rallied with birdies at three and six.

He reached the turn in level par, but had another drop at 11. Once again, he bounced back with birdies at 12 and 13 to stretch his lead to three shots. He dropped yet another shot at the tricky par-four 14th and thought he needed a birdie to win going down the last.

“Word came down from the 18th green that Power made par,” said team manager Neil Homann, who had a birds-eye view of the action on Lamprecht’s bag.

“Christo could have played it safe, but he knew he had the shot and wanted to finish in style. He hit a brilliant chip to two foot. It was something special to watch him make that winning putt. This young man is quite remarkable and he will only improve with experience.”

It’s tough to believe that just a fortnight ago, Lamprecht finished one from the bottom in the Flogas Irish Amateur Open Championship at Royal County Down.

But he paid attention during the practice rounds at Ardglass, Portmarnock, Royal Dublin, The European Club and the two courses at Carton House, which will host the 2018 World Amateur Team Championship in September.

The Louis Oosthuizen Junior Academy player was thrilled to bits celebrate his first international success in Ireland, following in the footsteps of his mentor, Open champion Louis Oosthuizen, who won the Irish Amateur Open at Royal Dublin in 2002.

“Nothing back home prepared me for Royal County Down and I want to thank GolfRSA and our managers Eden Thompson and Neil Homann for exposing us to all those great courses during this year’s UK Tour.

“I gained a lot of experience and I used everything I learned at County Louth. Pressure is a tough thing. I try to be in the moment at every shot and just focus on that and I held myself together. I am also grateful that Neil took the bag over the last nine holes. He kept me patient and his jokes kept me relaxed. Hopefully I can employ him again. I’m thrilled with the win and now I’m seriously excited to play the St Andrews Links Trophy and the Amateur Open.”

Therion Nel closed with a 69 to finish 12th, Clayton Mansfield signed off with a tie for 15th after his final round 75 and Jayden Schaper returned a 71 to tie for 27th.