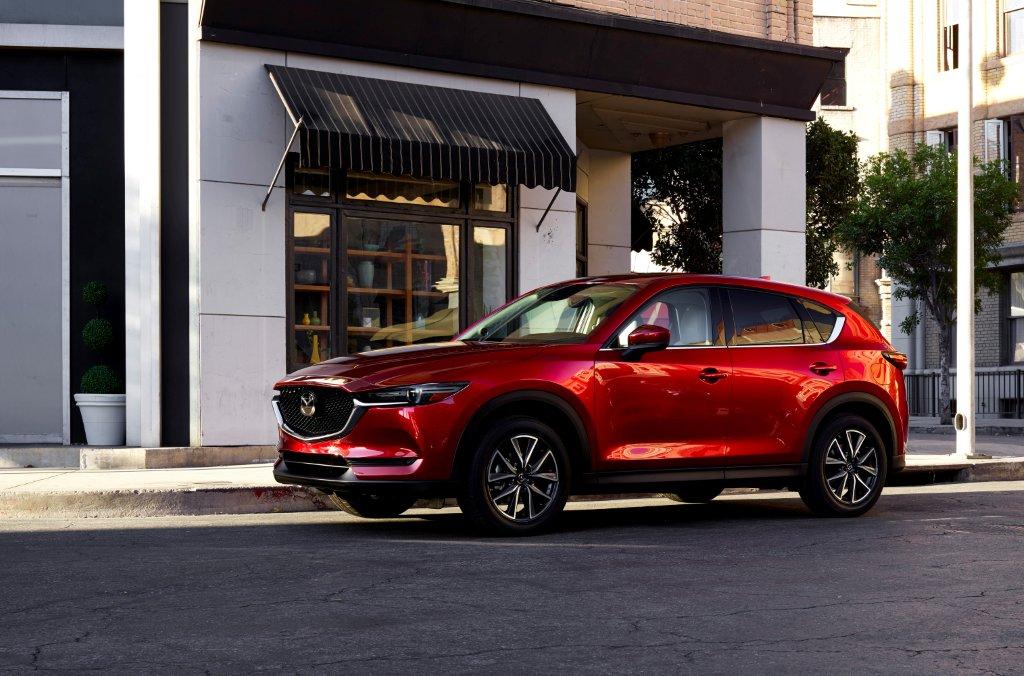 Brian Joss – In one of my previous reviews I pointed out that vehicle manufacturers sometimes change things for change’s sake.

But that’s not the case with the updated Mazda 2.2l DE Akera AWD Auto. It’s a much improved version of the previous two models, although the engine is the same. The new CX-5 just feels different and better from the moment you press the ignition button.

The familiar diesel thrum is missing on start up and you only hear it faintly for the first few kilometres.  But when you put foot it roars like the proverbial mouse.

One of the obvious cosmetic changes is the new nose giving the crossover SUV a much sportier look. It now has LED headlights and front fog lamps. When it was launched six years ago, the Japanese manufacturer introduced its much vaunted SkyActiv technology and Kodo Soul of Motion styling philosophy which is based on a running animal about to pounce on its prey. If you close your eyes you can imagine the CX- doing just that. It now has a lower roofline, sleeker slides and what Mazda calls “minimalist styling”. And it all adds to the Kodo philosophy.  In addition to Mazda’s trademark red some new colours have been added: Soul Red Crystal and Machine Gray Metallic: the Soul Red Crystal has an almost “gem-like translucency” and the Machine Gray metallic colour “achieves both high-contrast shadows and a high-density finish to give a realistic metallic feel”.

The test car’s colour was a Sonic Silver, a gentle tone of grey that I thought suited the CX-5 very nicely indeed.  The new design makes it look a lot more forceful although the exterior changes are not in your face, except for the shield-like grille, they are a lot more subtle.

Inside too,  there have been some big changes, and all for the better. Mazda kept the heads up display, projected on to the windscreen, which indicates speed and the zone you’re in.  Always a useful feature.  The dashboard is a lot leaner and the infotainment centre (a seven inch MZD Connect System) has been moved from its recess to a free-standing unit on top. It has Bluetooth connectivity, satellite navigation, and for your comfort, dual-zone climate control with rear ventilation, leather seats, power sliding and tilt sunroof, a Bose sound system with 10 speakers and for when the weather gets

As to be expected many of the safety features are standard in the Akera AWD, unlike many other SUVs in the same market segment.  Some of them are a lane departure warning system ; a lane keep assist and a smart city brake support

(SCBS) which assesses the possibility of a collision at speeds of up to 80km/h. There are visual and audible warnings if a crash is likely.

The power tailgate is a real bonus. All cars should have them. Touch the icon on the key fob, and just like that it opens or closes, but you can also operate it from inside by pressing the tag on the right of the steering wheel. So if it’s raining, you can let someone else put the bags in the boot so you don’t have to get wet.  Luggage space is 506 litres expanding to 1

620 litres with the usual 60-40 seat split. So if you’re packing for Plett the boot is big enough for your holiday baggage. It has a luggage cover and levers in the load bay to make the split easy. The rear is roomy enough for three adult passengers. And if they can’t live without their gadgets, there is a charging station with two USB ports.

The engine hasn’t changed at all. It puts out 129 Kw and 400 n.m and the torque is spread over a wide range.  The Akera is equipped with a six-speed automatic transmission which works well.

Driving the Mazda CX-5 is an engaging experience. Steering is precise and the ride is smooth.  The compact crossover SUV is also equipped with what Mazda calls G-Vectoring Control. It is reportedly the world’s first control system to change engine torque. Basically, says Mazda, “it’s an aid that aims to make race car-like cornering that every driver can enjoy.”  There’s no need to explain how it works, but it does.

While it doesn’t turn the CX-5 into a Formula 1, overtaking is no problem and there’s torque to spare when you need a bit more go. I had a lot of fun driving it along some of the more twisting roads on my usual test route.

Body roll is minimal if at all.  The CX-5 sticks like Velcro and it glides over most road imperfections.  The seats are comfortable with plenty of support and on a long drive your bum won’t get numb. There are some SUVs on the market that are made to get you from A to B in a bland sort of way.  The

CX-5 is for the person who enjoys driving, whether it’s on the open road or crawling at a snail’s pace In city traffic where the stop-start function kicked in. Mazda calls it the  Smart Idle Stop System (SISS).  Although I’m not sure if it saves petrol but Mazda’s SkyActiv technology does its bit to help improve fuel consumption. I recorded figures of slightly more than 7lires/100km.  The CX-5 is a practical and versatile SUV that will serve as family transport or for the daily commute.  The CX-5 smacks of quality and you can drive it in confidence to the poshest hotel where the concierge will rush to open the doors for you and your passenger.

The Mazda 2.2l DE Akera AWD Auto has a price tag of R571 300 which includes a host of features as standard that you won’t find in other SUVs.  The price includes a 3-year unlimited kilometre service plan, a 3-year factory warranty, a 3-year roadside assistance and a 5-year corrosion warranty.