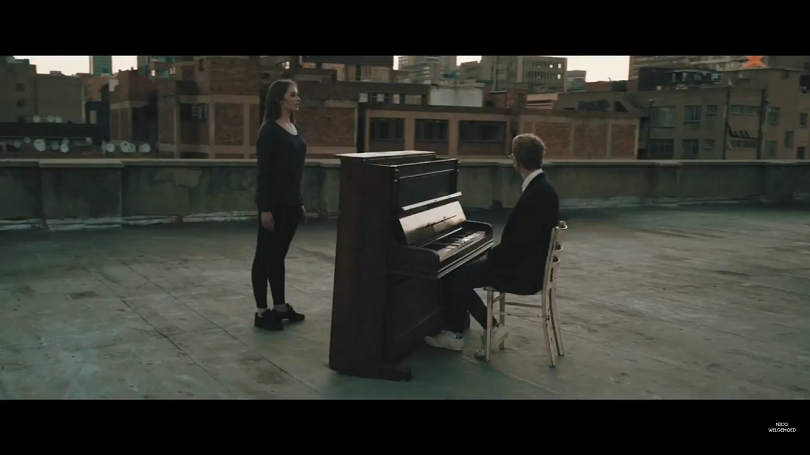 It is a power ballad and it is about a feeling we all experience from time to time:  searching for someone we can call home.  This powerful alternative ballad is poetic and touching, and the rhythm and melody are fresh and enthralling. It is the perfect fit for his unique voice and story-telling style, and will no doubt resonate with audiences of all ages.

The music video for this song has just been released and album are being planned for later this year.

“The music video for Monochromie is an elegant showcase of what happened in my mind when I wrote this song with Ruan Graaff and Nico Welgemoed.  The intrigue of the story behind the video is something very close to my heart:  the search for someone. The camera plays the role of the person that is looking and then it spots the dancer.   This story about the search is the backbone of the song” says Almero.

The video was filmed in the heart of Johannesburg on the roof of PropStars.  Nico Welgemoed produced the video with Bouwer Bosch as director. The dancer in the video is the amazing and talented Zahré Harris.  “Since I can remember I wanted to dance in a music video, but due to my lack of talent in the dancing department I had to be content with someone dancing around me”, jokes Almero.

About his music, Almero says: “It is full (sometimes too full) of images and metaphors and my voice is an instrument for which I have lost the manual.” He wants to shift boundaries in the Afrikaans music industry by combining his profound lyrics with modern and interesting sounds. MONOCHROMIE not only symbolises this goal, but also predicts what listeners can expect from him in the future.

Monochromie is available via the following platforms: