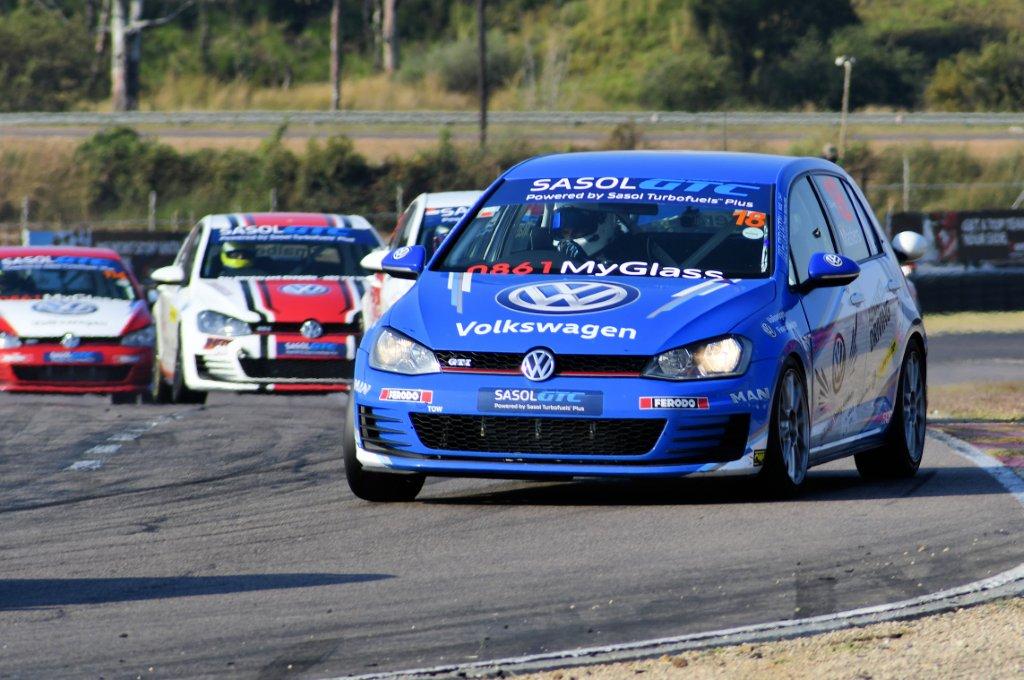 Brian Joss – Volkswagen Motorsport heads to the historic East London Grand Prix Circuit for round four of the Sasol GTC Championship on June 16 brimful of confidence after Daniel Rowe powered his Volkswagen Jetta GTC to back-to-back wins at the last two rounds while Keagan Masters has bagged four victories in his Volkswagen Golf GTi and leads the GTC2 championship.

Rowe sees the formidable ultra-fast circuit as an exciting challenge to be conquered; he understands that in spite of winning the second race at each of the last two rounds, there is still much more to come from the Port Elizabeth student.

A strong qualifying performance will be key although Rowe maintains he doesn’t mind starting from the first, third or even fifth grid slot as this will allow him to slingshot past his rivals at the fearsome Potter’s Pass on the opening lap.

“I don’t know if it is possible to run flat out through Potter’s in the race. I’ll find out when we get there. It depends on the wind”, Rowe explained. “Strong brakes and maintaining momentum are crucial at such a fast track. It is going to be an awesome experience driving there and hopefully I can bank another victory; after all that’s why I am racing”.

Mathew Hodges has had a challenging start to the season in the second Jetta GTC, having been forced to retire twice from the season’s six races held so far. He remains positive while relishing returning to the track where he scored his maiden victory in 2016.

says Hodges. “There are many positives to take from the first third of the season, which includes knowing the Jetta is a winning package. While everyone has respect for the faster sections, the complex will be tricky as you have a very fast approach. I am up for the challenge and look forward to racing hard at the front of the field”.

Keagan Masters is expecting a tough fight to maintain his winning ways. The Volkswagen Advanced Driving Golf GTi driver has never finished lower than second and enjoys an eight point cushion at the head of the GTC2 championship standings.

“The new slick tyres offer much more grip which will help maintain speed through the corners. Once I am used the speed after first practice, I can focus on set-up and race craft. I am keen to see how the tyres hold up during the races. Whatever happens, it is going to be an exciting day’s racing for the fans”.

After a positive test before the Eastern Cape races, Adrian Wood is very excited to return to a race track that has delivered strong results in other racing classes. Driving the second factory-entered Volkswagen Golf GTi in partnership with Kyocera, Wood is excited to be racing the most powerful car he has driven around the 3.9km track.

“Confidence is a major contributor to a fast lap at East London” Wood asserts. “You need faith in the car underneath you which needs to have very good balance and not lose grip mid corner. Even the complex is a fast but tricky section of the track; its way quicker than it looks from the outside and you really have to throw the car through the corners. I’m really looking forward to the races”.

Volkswagen Motorsport Team Manager Mike Rowe added: “The whole team is in a good space. They have started to reap the rewards for their hard work.

Daniel and Keagan are on top of their game, while Mathew is driving as well as ever while Adrian continues to grow at every race. We are aware that we have a lot more work ahead of us to deliver consistently strong results and we are getting to where we would like to be”.