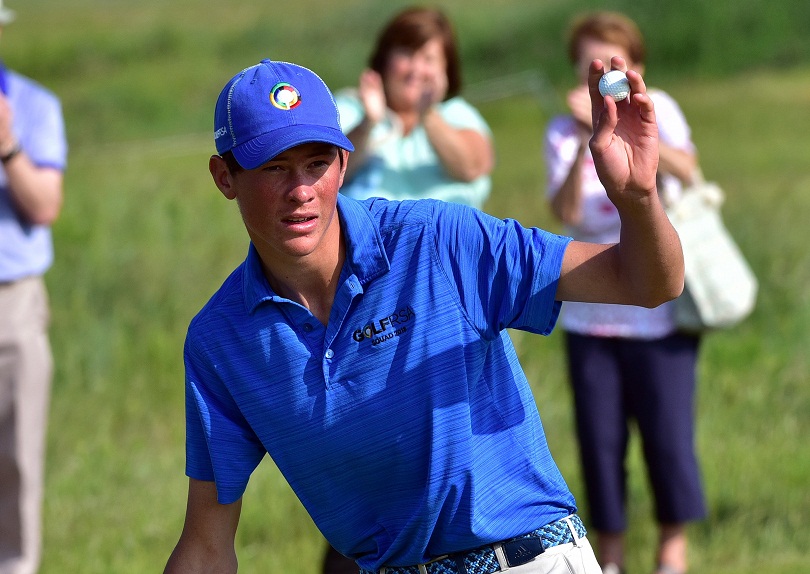 You would imagine the quartet would have plenty to lament after they wrapped up the St Andrews Links Trophy in Scotland on Sunday, but they were pretty upbeat as they boarded the train with the rest of the GolfRSA National Squad for the journey to Aberdeen – and The Amateur Championship – on Monday.

“We spoke about what happened, put it in a box and forgot about it,” said the 17-year-old Lamprecht from George. “You can’t cry over spilled milk. It’s in the past. When you choose to focus on the positives, you have a lot more to draw from in your next tournament.”

Lamprecht started the final round one off the pace after rounds of 70, 67 and 71.

The rising star from the Louis Oosthuizen Junior Golf Academy reeled in birdies at nine and 16 and played flawless golf for 16 holes. With two to play, he was tied for the lead and looked set to be involved in a play-off with Irishman John Murphy, who eventually beat Jannick de Bruyn from Germany for the title in extra time.

“I had an oopsy,” said Lamprecht after a triple bogey at the par four dropped him back to six-under and he had to settle for eighth place after closing with a 73.

“I hit my tee shot left and I had a 50-foot putt left to a pin that was tucked behind the bunker on the left. I had to putt against an upslope that turns left and I just didn’t hit it hard enough. The ball turned left and rolled into the bunker.

“I left it in the bunker, got out on the second try and missed the putt. One of our managers, Roger Wessels, caddied for me in the final round. When I walked off the 18th green, he told me that a lot of legends of the game have done what I did. They learned from it and I did, too. What I’m taking to the Amateur is that I played great golf, I was control of my game and I scrambled really well.”

“This was my second time playing St Andrews and without a doubt, it’s one of the best places in the world to play,” said the Durban Country Club golfer. “The history and feeling you get playing the Old Course is indescribable.

“I had a decent week, just one department of my game let me down and that was the putter. The strength of my week was my ball striking and my driving especially. I’m feeling good about my game heading to Aberdeen. The Amateur is the biggest event of the year for us. We have the rest of the week to grind at the small things and I’ll be spending a lot of time on the putting green.”

Nel relished his debut at the Home of Golf.

“It was the most amazing experience to play at St Andrews,” said the Free State golfer, who tied for 38th on five-over after rounds of 75, 68, 72 and 77. “You always watch the pros during the Open and the Alfred Dunhill Links, but to walk the hallowed ground of the Old Course is incredibly special.

“I really enjoyed the tournament, but it was challenging. You can hit a good shot and the wind takes it, or you catch the slope the wrong way. You could end up in a bunker or you face a 40 metre putt. The wind, especially over the last three holes, was tough. It’s all part of the magic of St Andrews. Now I’m looking forward to the Amateur and another new experience. This trip has been amazing.”

The Milnerton golfer got off to a fast start with a 68 at the par-71 New Course and followed with successive rounds of 74 at the Old Course. He grinded out a final round 77 to tie for 40th on six-over.

“I had a really great week, despite a really poor start in the final round,” said the 19-year-old. “I was five over through four, but I fought hard to finish five over for the round. I left five birdie putts out there in the morning in the third round and if those had dropped, it would have made all the difference.

“I grew up playing links golf and I really love it, so I’ve been preparing 10 years for this experience. I was very positive coming to Scotland and really pleased to make the cut that was so low. I’ll take a lot of confidence to Aberdeen.

“I was chatting to the other guys about the UK Tour so far. The guys can’t stop talking about the things they have experienced and what they’ve learned. What Mr Rupert’s investment in the GolfRSA National Squad has meant for us…you can’t put a price on it.”

One of the biggest and most prestigious amateur events in the world, the 123rd Amateur Championship will be played from 18-23 June at Royal Aberdeen and the Murcar Links for the first time in history.