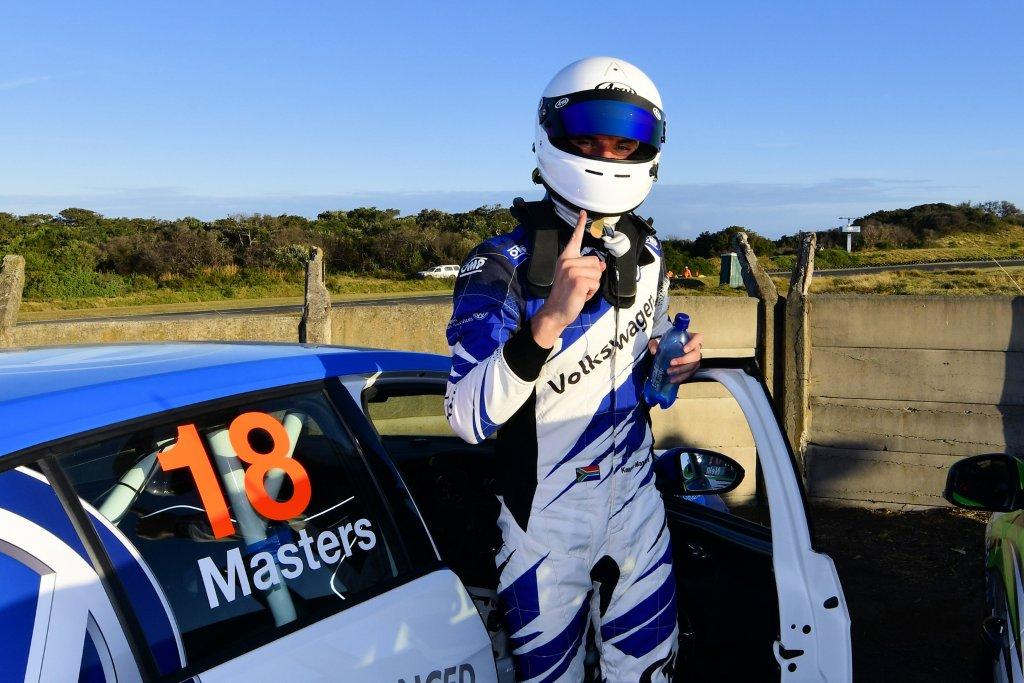 Brian Joss – In a day of contrasts for Volkswagen Motorsport, Keagan Masters put in two superb drives in his Volkswagen Advanced Driving Golf GTI to extend his lead in the Sasol GTC2 Championship while Daniel Rowe and Mathew Hodges had a tough day in the office behind the wheel of their Jetta GTCs.

The Volkswagen Motorsport-run Jetta GTC duo got off to a fair start during Friday’s free practise sessions but during official qualifying, Mathew ran off the track at the infamous Potters Pass; the front aerodynamic splitter dug into the soil and damaged the front end of the car. Daniel placed his car a disappointing seventh position on the grid.

Keagan dug deep and pulled a fantastic lap out of his bag of tricks to take the GTC2 pole position by 0.3 seconds, while Adrian Wood slotted his Kyocera Volkswagen Golf GTi into fourth position in the starting line-up.

In spite of the best efforts of the VW Motorsport Team, the damage to Mathew’s car could not be repaired before the first race and he was forced to sit on the sidelines. Daniel flew the Volkswagen flag solo but battled with straight-line speed down the long straight and finished in seventh place after an uneventful race.

Keagan was embroiled in an exciting race-long duel with Devin Robertson (Mini); the two rivals raced hard, circulating side-by-side as they fought for every advantage. Keagan twice got ahead of his adversary, only to out-brake himself and allow Robertson back past. As the race wound down, he settled for the runner-up position and an increase in his championship lead.

Adrian suffered a puncture halfway through the race and dropped to the back of the class as he limped back to the pits; the VW team got him back into the race without losing a lap but with time running out, the young Advanced Driving Academy instructor remained eighth.

Race two saw Daniel start from third on the grid while Mathew had to start from the rear of the field. The two Jetta GTC drivers entertained the large crowd with some spirited driving as the pair passed and re-passed each after Mathew clawed his way up into the middle of the pack. Daniel was again hampered by a lack of straight-line speed and a change in set-up which didn’t deliver the result he expected. Daniel ended fifth and Mathew sixth.

The GTC2 race was another thrilling contest; from the back of the field, Keagan and Robertson sliced their way through the field, emerging at the front three quarters through the race. Close racing evolved into rubbing body panels as they fought for every millimetre of  track position. With two laps to go, Keagan pulled out a small lead to take victory by a scant 0.186 seconds.

From pole position, Adrian made a fantastic start but as the race wore on his tyres started to wear and he had a sideways moment at Potters Pass, allowing Keagan and Robertson past. He held on to his third place to claim the final step of the podium, much to his and the team’s delight.

Volkswagen Motorsport Team Manager Mike Rowe said: “In many respects we have had a good weekend with Keagan again showing his growth and maturity as a top class driver and consolidating his lead in the GTC2 Championship. Adrian has made a big step and was on the podium in race 2. The results in GTC were not what we expected given that we have been able to win races on our previous two outings. We need to analyse the data, identify the problem and fix it. We will be working as hard as ever in preparation for our home race in a month’s time”.

Volkswagen Motorsport’s next outing is at Aldo Scribante in Port Elizabeth on July 14.