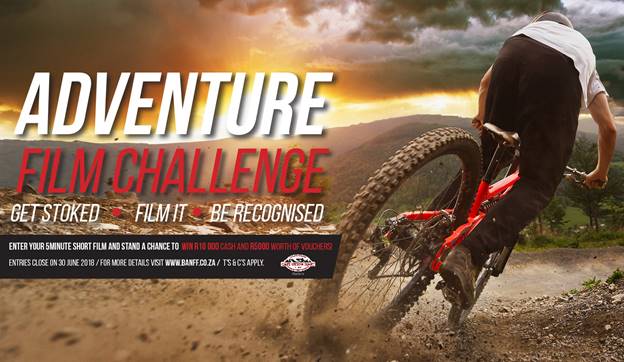 Entries for the 2018 Cape Union Mart Adventure Film Challenge are officially open! Great news for South African adventure-loving filmmakers hoping to make it to the big-screen.

To enter, submit a YouTube link to your five-minute film, showcasing your passion for outdoor adventure, on www.banff.co.za. The winning submission will be screened alongside international adventure films at the Banff Mountain Film Festival to be shown in Ster-Kinekor cinemas countrywide. Thousands of adventure enthusiasts gather to watch the BANFF, featuring an exhilarating collection of films that explore the mountain world, highlighting new landscapes and remote cultures, and exposes audiences to exciting adventures and adrenaline-packed sports!

This year’s Adventure Film Challenge winner will also receive a R10,000 cash prize and K-Way gear to the value of R5,000.

This year marks the fifth instalment of the annual competition that provides aspiring filmmakers with a platform to “get stoked, film it and be recognised”.

Submissions in this year’s Challenge will be judged on storyline, creativity, originality, visual composition and technical execution, along with editing, sound, music and overall impression. Films must be no longer than five minutes (300 seconds), including titles and credits. Entries close at 12:00 on 30 June 2018 and the winner will be selected by an external panel of judges who are involved in South Africa’s outdoor film scene.

The Cape Union Mart Group is based in Cape Town and currently houses 5 major retail chains which includes Cape Union Mart, Old Khaki, Poetry, Tread + Miller and Keedo. The group collectively has over 250 stores. The outdoor division is carried by Cape Union Mart, South Africa’s favourite outdoor store and the group’s flagship brand, which retails across South Africa, as well as Namibia and Botswana. It also exclusively stocks the K-Way brand, which is an extremely popular technical range of outdoor clothing and gear.