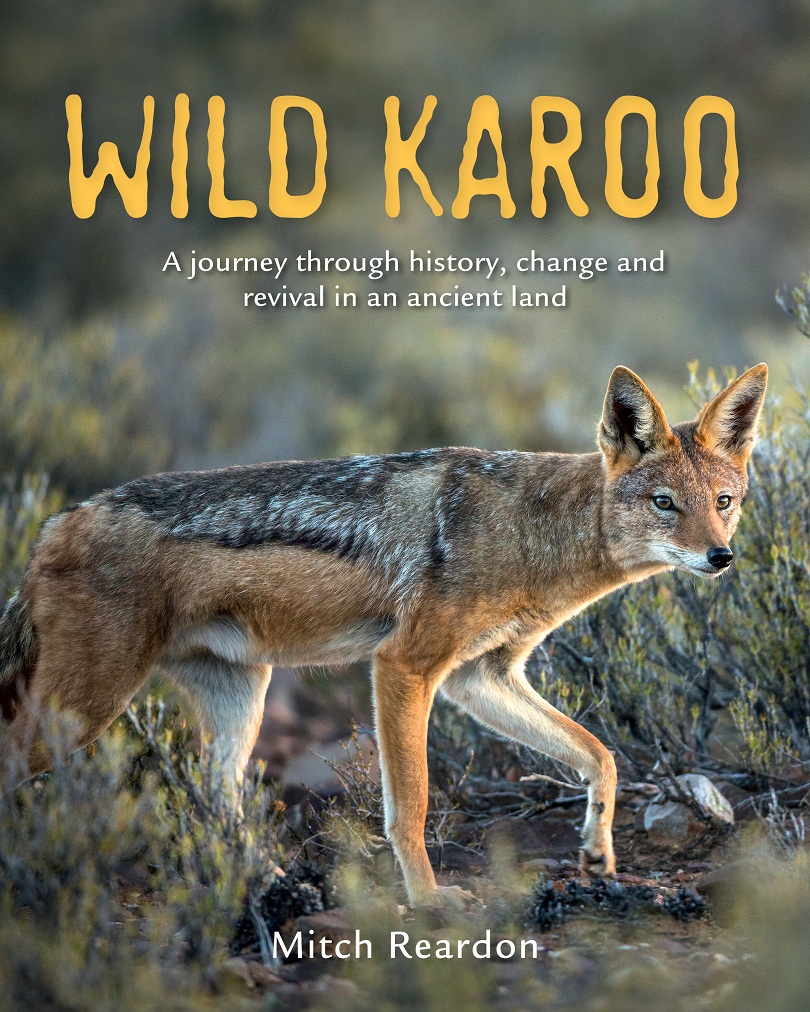 On the face of it the Karoo looks lifeless and arid. But as they say in the classics don’t judge a book by its cover.

That so-called desolate area is home to an amazing array of flora and it is beginning to teem with wildlife that is being reintroduced to the area.

Mitch Reardon, who worked as a ranger in South Africa and Namibia before turning his hand to writing and photography, undertook a 4 000 kilometre trek to discover the area’s delights. Reardon’s journey took him from the Bontebok National Park in the Southern Cape to the Mountain Zebra National Park in the Eastern Cape and points in between.

The book is divided into 10 chapters: Southern Beginnings; The Langeberg and Little Karoo; Karoo National Park; The Plight of the Springbok;  From Tankwa Karoo to the Cederberg; Namaqualand; The Great River; In Search of Elusive Beasts; The Mountains and Plains of Camdeboo and the Mountain Zebra National Park.

Each chapter looks at nature conservation, game, flora, landscape and geology, the history and lifestyle of the people who have made a home in the area and the plans aimed at reversing some of the effects of human settlement.

The Great River of course is the Orange which is known by several names. The Bushmen call it Hey! Gariep (yellow or dull water), the Namaquas knew it as Ein (Our River) and the Cape Settlers referred to it as the legendary River Esperito of Monomotapa or simply the Groote Rivier. The last 550km became the international border between South Africa and Namibia. The river is home to a variety of bird life including flamingos who feed at the mouth’s shallow edge. Although Reardon says the area is worth a visit he found the local tourism officer evasive and unhelpful and eventually she stopped returning his calls.  Which is why he spent the night at Alexander Bay which is just a layover. Grudgingly the owner of a guest house allowed him to stay until morning. The mean-spirited owner didn’t spoil Reardon’s trip and he saw some astounding sights along the river.

In Search of Elusive Beasts Reardon follows the Orange to Upington and then to Kimberley, although more often associated with diamonds it has another claim to fame, the Kamfers Dam which has,  since the 1990s, become a paradise for “twitchers” who have the chance to tick a “lifer” off their list. The Kamfers was mostly a dry saltpan until the municipality started pumping its treated sewage and stormwater run-off into it, so attracting many bird species, and it now supports the largest proportion of Lesser Flamingos, up to 80 000, in southern Africa where they feast on the “nutritious soup” that results from the run-off and the sewage. Other elusive beasts that Reardon spotted were the rare black-footed cat: this one had only one eye and many rare birds which he saw at the Marrick Safari camp which has been in the Datnow’s hands since the family arrived from Lithuania in 1908.  Others were the springhare; Smith’s red rock rabbit and an aardvark as well as two aardwolves which popped out of nowhere and just as suddenly disappeared into the night.

Reardon has a fund of anecdotes that he relates about his kilometres long journey. When he was searching for Namaqualand’s famed flowers he found himself in the Skilpad section of the Namaqua National Park. Originally part of Tortoise Farm it was renamed Skilpad, so called for the many drowned tortoises a farmer found in his water trough.

At the beginning of each chapter is a quote from an historical figure: “The silence of the wilderness eventually seeps in and makes an area which will always Long for that kind of silence again”. This from Irish soldier-writer Gerald Hanley in Warriors and Strangers (1971) referring to the Cederberg. “To view the admirable perfection of Nature … in the wilds of Africa, the irresistible motive which led me on,” wrote William Burchell (Travels in the Interior of Southern Africa, 1822, about the Langeberg and Little Karoo.

The full colour images which beautifully illustrate the Wild Karoo are by Reardon except where noted.

Wild Karoo is a must for anyone interested in this part of the world. It is well-written and will keep you entertained for hours. The book, subtitled, a fascinating “journey through history, change and revival in an ancient land”, should be an essential part of your backpack. And if you have visited many of these places as I have done, it will bring back happy memories.