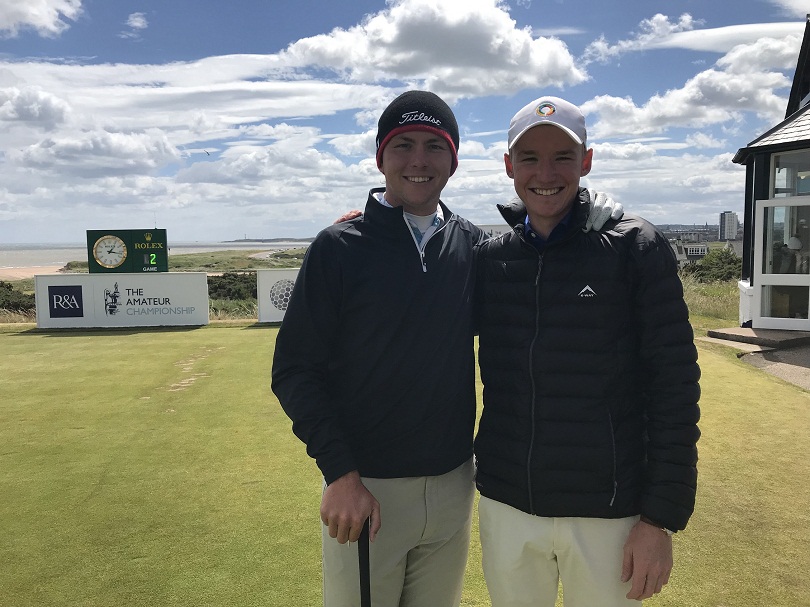 ABERDEEN, Scotland (21 June 2018) – George golfer Jovan Rebula will be the lone South African starter in the quarter-finals of the 123rd Amateur Championship today after Wilco Nienaber and Luca Filippi were eliminated in round four.

Rebula defeated fellow GolfRSA National Squad player Malcolm Mitchell 1-up in the third round to progress to the top 16 and defeated Ben Hutchinson from England at the last hole to reach the top eight.

The South African had a double bogey at the par five second, but the match was back to all-square after Hutchinson dropped at four. Hutchinson won the par five sixth with an eagle and Rebula trailed until the 15th hole.

Hutchinson’s bogey at the par four levelled the game and the Rebula went 1-up with a par at 17.

“We both had long putts for par on 18,” said the Auburn University student. “I lagged mine very close and that put pressure on him to hole his putt. When he missed, I had a tap-in to win the match.

“The weather conditions were crazy tough. It blew really hard in the morning and even worse in the afternoon. It was definitely a testing day.”

The 20-year-old Ernie Els and Fancourt Foundation member said the match against Mitchell was the tougher of the two.

“Malcolm is a really good friend and we got a good game going, but it was difficult to keep focussed in the match,” he said. “It was extremely tight and I feel very fortunate that I won. I had Matt (Saulez) on the bag and I owe him for keeping me in the moment. I’m very happy to be in the semi-finals and excited about the rest of the week. I’m feeling very positive and I’ll have Matt, my lucky charm, with me every step of the way.”

Rebula might have a little revenge on the mind when he faces Tom Sloman in the quarter-finals.

The Englishman eliminated Nienaber, who had great hopes of winning the title after he became the first South African to win the stroke play qualifier since qualifying was introduced in 1983.

Nienaber had control for first six holes after Sloman made a bogey start, but the lead changed hands a few times after South Africa’s leading amateur had a triple bogey at the par four seventh. After the Englishman dropped at nine, the pair halved the next three holes.

“I had the chance to force the match to the 19th hole with par at the last, but the putt slipped past the hole,” said Nienaber. “I’m obviously disappointed, but that’s match play. Sometimes the putts drop; sometimes they don’t.

“Ben played great golf and it was a great contest. I had a fantastic time here at Royal Aberdeen, though, and I’m going home with a lot of positives and special memories and no regrets. Now we’re all getting behind Jovan.”

Filippi saw off fellow Ernie Els and Fancourt Foundation member Therion Nel 4 & 3 in the third round, but lost by the same margin to Christoffer Pålsson. The Swede went 5-up with back-to-back birdies at 12 and 13 and celebrated victory when the pair halved on 15.

“Today was tough from start to finish and I was disappointed with the outcome, but the last two weeks have been absolutely amazing,” said the 19-year-old Western Province golfer. “I have really enjoyed the opportunity to play some great courses and I know I speak for the entire squad when I say that we are extremely privileged to have the backing of Mr Rupert, who made this tour a reality.

“Now it’s down to Jovan to try and put a South African in the final, and we’re pulling for him to go all the way.”