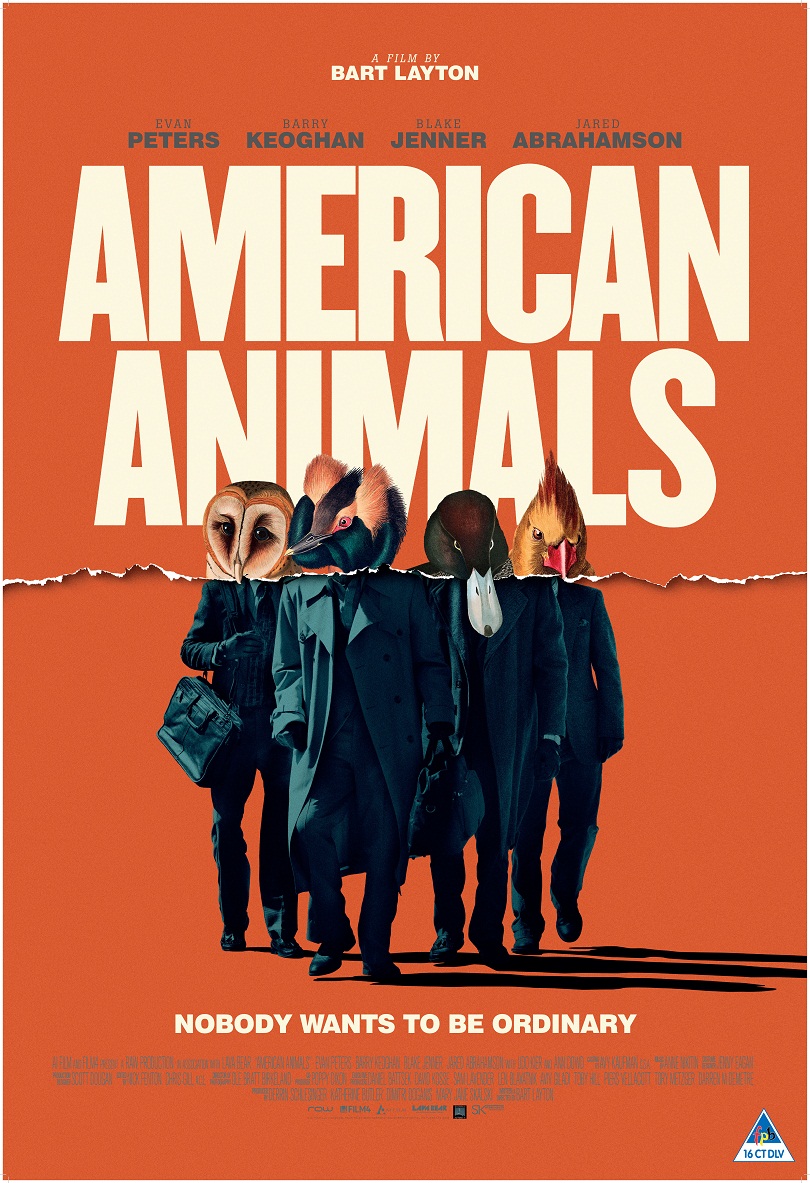 Almost all young people get into a little trouble now and again… but what happens when a ‘little trouble’ spirals out of control and has huge, life-altering, consequences…?

AMERICAN ANIMALS is an extraordinary and thrilling film about two varsity buddies, Warren Lipka (Evan Peters) and Spencer Reinhard (Barry Koeghan) who, desperate to break out of the ordinary, brazenly attempts to execute one of the most audacious art heists in US history at Transylvania University in Lexington, Kentucky, in 2004. Enlisting two more friends, budding accountant Eric Borsuk (Jared Abrahamson) and fitness fanatic Chas Allen (Blake Jenner), the gang plots to steal valuable art books valued at $10-million… a scheme which eventually goes bust and ends in jail time for all involved, placing their seemingly bright futures in limbo!

This captivating true story, which will keep you on the edge of your seat, premiered at the Sundance Film Festival in January 2018. British-born director and scriptwriter, Bart Layton (who also makes his debut as narrative feature director), cleverly elevates the story to bold and thrilling heights by combining the dramatic narrative of the daytime heist with documentary style post-prison testimonials from the real criminals who organised it. It becomes clear that not everything is as it seems, as the daring theft unfolds through each of their perspectives.

“AMERICAN ANIMALS tangles with a number of weighty themes, but never at the expense of delivering a queasily compelling true crime thriller,” is the opinion of the review-aggregation website, Rotten Tomatoes, which gave the film a rating of 85%.

According to Layton, who became famous for his BAFTA award-winning crime documentary, The Imposter (2012), he immediately saw the crime story’s cinematic potential after reading about the heist. The more he learned about it, the stranger the story became and the more unlikely it seemed that the young men would be able to pull it off. “I wanted to find out why a group of seemingly educated young men with comfortable backgrounds would go through with a crime like this in the first place,” he reveals. “Each of them gave a strikingly different reason for what they had done. In the absence of what they saw as meaningful life experiences, they set out to plan one by watching heist films and doing research on the internet. As time progressed, they became increasingly reluctant to let go of the fantasy they have created.” Producers Dimitri Doganis (The Imposter), Katherine Butler (Kill List), Derrin Schlesinger (Four Lions) and Mary Jane Skalski (Pariah) were also involved in the production of this outstanding motion picture.

Furthermore, the film also boasts an excellent cast and has already received a lot of praise for outstanding performances by the lead characters. Evan Peters, who is known as the character Quicksilver in die X-Men movie franchise, stars as ringleader, Warren Lipka, in this action packed crime thriller, while Barry Koeghan (The Killing of a Sacred Deer) can be seen as art student, Spencer Reinhard. Former MMA fighter, Jared Abrahamson (Travellers), and Blake Jenner (The Edge of Seventeen) play the roles of Eric Borsuk and Chas Allen.

Although parts of the film will remind you of scenes from an Ocean’s movie, you will immediately realise that there is more to this story than meets the eye. “The film takes what sounds like a bizarre college prank gone wrong and blows it up into an epic, operatic modern tragedy, examining the murky depths of a uniquely American modern existential crisis. The film asks the uncomfortable question: When you’ve been given everything, how far do you have to go to feel anything?” writes Katie Walsh of the entertainment website, SouthFlorida.com.

AMERICAN ANIMALS promises to take audiences on an exhilarating adventure that intentionally blurs the lines between fantasy and reality to provide some insight into the minds of the youngsters, whose pursuit of a more exciting existence, changes their lives forever. It is a film that will leave you with mixed emotions about whether the punishment suited the crime and if the so-called meaningful life experience was worth the price it came at.

“Heavy subtext aside, AMERICAN ANIMALS remains a slick, smart heist film that entertains from start to finish. It also highlights the first rule of larceny: Before stealing something, make sure that you’re actually strong enough to carry it,” The Seattle Times’s J.R. Kinnard concludes.

The movie is locally distributed by Filmfinity (Pty) Ltd. and will be released in cinemas on 6 July 2018.