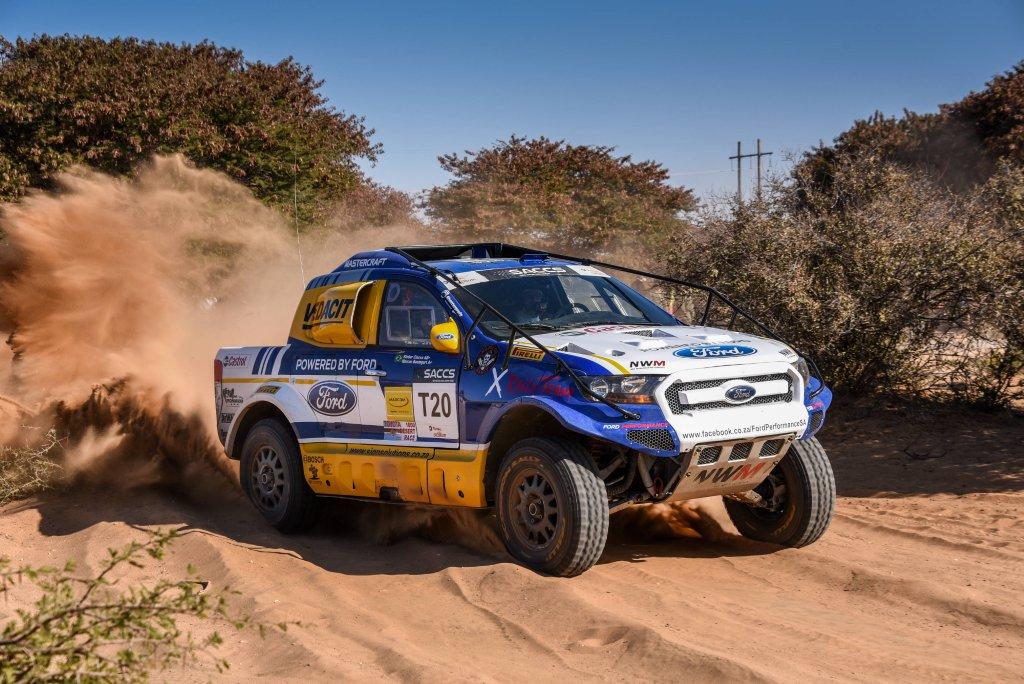 Brian Joss – The annual Botswana Desert Race is the longest event on the South African Cross Country Series (SACCS) calendar, and this year’s running lived up to its well-established reputation as also being the toughest by delivering a mix of delight and disappointment for the Ford Neil Woolridge Motorsport (NWM) team.

1000 Desert Race with a clean sweep of victories in Class T at the season’s two opening rounds, and they did their title aspirations a world of good by securing pole position on Friday followed by the race win on Saturday to take the overall victory for the first heat of the two-part marathon race.

They looked set to claim a clean sweep for the entire weekend until mid-way through the second of Sunday’s two 212km loops when the centre differential failed, forcing them to retire on the spot.

Team-mates Gareth Woolridge and Boyd Dreyer turned the tide on their difficult start to this year’s championship by powering their #T77 NWM Ford Ranger – fitted with the latest specification direct injection Mustang 5.0-litre V8 engine – to a solid second place in race one.

They also appeared to be on track for a repeat podium finish on Sunday, but a fuelling issue related to the new engine saw them lose heaps of time, but they soldiered on to cross the line fifth.

The Brazilian X Rally Team of Marcos Baumgart and Kleber Cincea had a clean run throughout the weekend, and brought their #T20 NWM Ford Ranger – which was also equipped with the new-spec engine – home in a superb fifth place in race one, and a commendable third in race two. This gave them third overall in Class T for the Desert Race, and their second podium finish of the year in the SA championship.

The NMW Ford Rangers have been unbeatable this year over the short qualifying laps as well as full race distance, and this year’s jaunt into Botswana’s desert plains around the diamond mining town of Jwaneng proved no different.

Lance Woolridge and Ward Huxtable claimed the early advantage in the 48km qualifying sprint by setting the fastest time in Class T – their first qualifying win of the season.

Having led the qualifying charge so far this year, Gareth Woolridge and Boyd Dreyer settled into a comfortable third place in Class T, 20 seconds behind the Toyota Hilux of Gary Bertholdt and Geoff Minnitt.

Baumgart and Cincea were ninth fastest in the highly competitive field, having had a minor electronic programming issue with the new engine on the fast open sections, and they relished the prospect of moving up the order as the race unfolded.

For the first heat in race 1, the qualifying times from Friday’s 48km loop are combined with the results from Saturday’s two loops of 222km each for a total distance of 492km. Not surprisingly, the cars were suitably battle-scared after their brush with Botswana’s rugged thorn bushes, but under the skin the NWM Ford Rangers were running like clockwork. Lance and Ward were in a class of their own, and maintained an unassailable lead to score an emphatic victory in race one.

Gareth and Boyd were on a charge, and despite spending most of loop one in the dust of Bertholdt and one of the special vehicles, they eventually surged ahead to slot into second place by the time they entered the pits. An untroubled run through loop two secured their second place finish, along with a valuable haul of championship points.

Marcos and Kleber also remained out of trouble and enjoyed a clean run to move up to fifth place in Class T, despite the challenging and rough terrain being far more extreme than what they experience in the Brazilian series.

In race 2 the Ford NWM team was brimming with confidence when the action resumed for race two on Sunday, with Lance and Ward aiming for a clean sweep of the Class T results and the opportunity to increase their championship lead.

The race was proceeding according to plan until halfway through the first loop when the leading Ford crew hit a tree with a rear wheel on one of sandy corners. This damaged the rim and tyre, and cost them around 3 minutes.

The remainder of the loop was completed without incident, and the championship leaders entered the pits in fourth place. After service they resumed the challenge, only to come to a halt 29km into the second loop with a broken centre differential.

For Gareth and Boyd, the power advantage of the new V8 engine was mitigated by the Ranger running out of fuel just 13km from the end of first 212km loop as a result of the different electronics and programming, and the resulting incorrect fuel calculations on its first  race outing. Having eventually received 5 litres of petrol from a local resident, the young crew cruised slowly back to the pits, having lost an hour in the process.

A tenacious drive on the second loop saw them fight back to cross the line in fifth place, adding to their points tally for the weekend.

Ultimately it was up to Marcos and Kleber to keep the Ford flag flying high, and they produced a measured drive to claim place for race two, and in the overall Class T results for the Desert Race. This gave the Brazilians a superb second podium of the year following their top three result at the season-opener in Dullstroom.

“We have to take the positives out of this event, as we won yesterday and got second place, and we’re still leading the championship. It’s just disappointing that we couldn’t continue the great form today as we should have been to finish with a top result and increase our championship lead.

“At this stage we’re not sure why the diff on Lance’s car failed, as everything is renewed and rebuilt for the Desert Race, so we need to go back and understand what happened on his car, and why.

“On Gareth’s car we got caught out with the new engine, and seem to have misread the electronics, which meant it ran out of fuel. It’s part of the learning curve, but overall we have made huge improvements on our car from where we were last year where we really struggled in the soft sand and tight turns. We have taken a huge step forward with the suspension, and the early signs from running the new engine have been very encouraging.

“It is a great result for Marcos and Kleber, who have improved in leaps and bounds. They have gained lots of experience and learned a lot on this race.”

Lance Woolridge (T34):  “There are a lot of positives to take away from the

Desert Race having won the first heat, and we made big improvements to the suspension on our car that allowed us to be really competitive this year.

“We had a great run in  race one,  and although it’s disappointing to have retired in race two, we leave here still in the championship lead. However, Johan and Werner Horn have closed the gap to within eight points, so we’re going to have a fight on our hands at the next event.

“Our car is now the best it has ever been, so it should allow us to be really competitive at the next round on more had-pack gravel surfaces.”

According to Gareth Woolridge (T77): “The Botswana Desert Race is always a tough event, but we had great potential here with the new engine and revised suspension setup. Our second place finish on Saturday was a decent result, although we were held up in dust for most of the first loop. We had a bit of dust to contend with but we were comfortable with our pace, only to land up running out of fuel so close to the pits. We lost a lot of time, and I wasn’t even sure if it was worthwhile going out for the second lap, but we did and picked up fifth place. Every point helps for the championship.

“Considering that we didn’t have any punctures or mechanical issues our final results are a bit frustrating, but we have made great progress with the car and we’re looking forward to the next race.”

Marcos Baumgart (T20), said: “We really enjoyed the Botswana Desert Race, although this event is much rougher and tougher than what we are used to. It is also extremely fast, with lots of straights where we were flat-out at 180km/h for up to 14km at a time. The route was especially rough on Saturday, but the car is amazing. We felt comfortable to push without taking any risks and were very happy to finish in fifth place. The new engine is amazing, particularly in third gear through the winding sections in the soft sand.  To end on the podium again is a fantastic result. It was an amazing feeling with the large crowds shouting and cheering at all the road crossings, which made this race very special.”