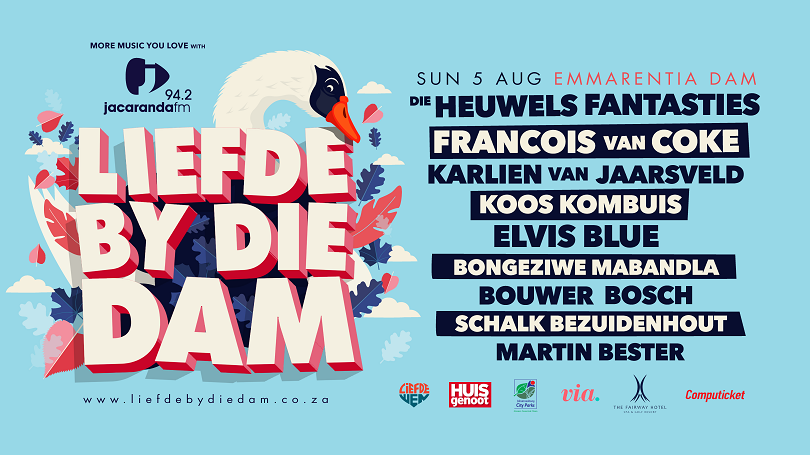 Martin Bester has joined the Liefde by die Dam 2018 line-up. His first Afrikaans album ‘Vir die eerste keer’ was released in November 2016 and fans can look forward to Bester performing some of the songs from this popular debut release.

Bester hosts Breakfast with Martin Bester on South Africa’s leading independent radio station, Jacaranda FM, with former Miss South Africa, Liesl Laurie and SuperSport presenter, Elma Smit. Bester says that this concert is a perfect fit for his current ‘Vir die liefde tour’: “The idea is that people attending my concerts have to bring a blanket for charity to be able to get entry to the shows. I am looking forward to perform some of my Afrikaans songs, as well as some English rock tunes.”

Pierre Greeff from Die Heuwels Fantasties says that this is just the cherry on top of a phenomenal line-up: “We have a diverse line-up of South African greats that features music for young and old: Die Heuwels Fantasties, Karlien van Jaarsveld, Francois van Coke, Koos Kombuis, Elvis Blue, Bongeziwe Mabandla, Bouwer Bosch and Martin Bester. The MC will be the popular Afrikaans comedian Schalk Bezuidenhout.

Die Heuwels Fantasties, Karlien van Jaarsveld, Francois van Coke, Bouwer Bosch and Elvis Blue have all been making headlines in the past few years with the release of new singles and albums and they have collectively won numerous prestigious local music awards. Add to this already impressive line-up, one of SA`s most influential singers, the legendary Koos Kombuis, as well as the captivating new face of Afro-Folk Bongeziwe Mabandla, and the very popular Martin Bester, and the stage is set for a fantastic, memorable concert.

Charlotte Kanter, Marketing Manager for Liefde by die Dam says that they are partnering with Bouwer Bosch and his Liefde Wen team again this year for the customary Liefde by die Dam blanket donations: “On 5 August, bring along a blanket to laze on whilst enjoying 8 hours of entertainment but leave it behind for a better cause! We will be donating all blankets to Liefde Wen so that they can keep the needy warm this winter! We are aiming to collect 1000 blankets this year and we hope all of our attendees will get behind this worthwhile cause.”

For your day out at the dam there will be a delicious range of South Africa’s best artisan food traders. You can also bring your own picnic baskets.