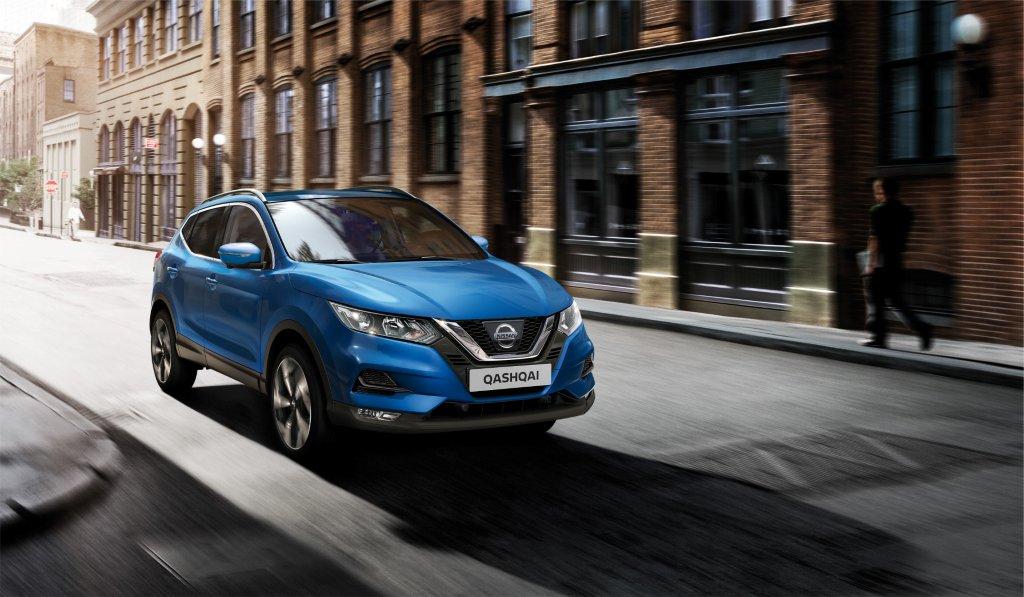 Brian Joss – It was one of those cloudless Cape winter mornings: the sky was a vivid blue, the sun was shining although there was a nip in the air.

I was driving the new Qashqai from Nissan, the 1.2 Acenta with CVT, the same colour as the sky, down Blaauwberg Road in Table View keeping to the 60km/h limit because the area is notorious for its speed traps. Suddenly a man talking on his cellphone emerged from in front of a bakkie that was parked on the pavement and walked into the centre of the Qashqai’s passenger door.

The thump was loud and frightening. And through the rear view mirror I could see his crumpled body on the ground. In seconds the Table View Neighbourhood Watch arrived, secured the area and directed rubber-necking motorists away from the scene.  The police were there too and the one officer just shook his head when I gave my statement to him. “Eish, cellphones,” he said. The man suffered a broken leg and the Qashqai’s door had a dent in it, the side mirror was hanging by its wiring and it left an imprint on the window. We also found his cellphone a few metres down the road. The tow truck drivers arrived too, and wanted to know if the car was driveable. It was, but I can understand why motorists who have been involved in crashes feel vulnerable when the “vultures” arrive. They hardly give you a chance to respond before they start hooking up the vehicle to take it away to who knows where, and charge you an arm and a leg for the privilege.

The sad thing is that when the man recovers he will probably repeat the exercise and even text and talk on his cell when he is behind the wheel. The incident took seconds but those few seconds were enough to blight my day.

But not enough to spoil my ride in the Qashqai. The Acenta is fitted with a CVT and though many people don’t like it I’m a fan of any kind of automatic transmission. Mainly it saves you from  manually changing gears in heavy traffic.  And the CVT does seem to be improving. The CVT (continuous varied

transmission) works much like a scooter’s gears. And there is a difference between a CVT, an automatic gearbox and one with manual transmission. There is also another type of gearbox:  the dual clutch transmission which is baiscally two manual gearboxes in one system. One for odd numbered gears and one for even numbered gears and is used for quick gear changes to great effect.

Nissan said the new generation CVT has been refined using real world experience. Which means maintaining the correct temperature of the special fluid which cools the system. Once the driver understands the principle behind the CVT the “system will function smoothly”. Embedded software protects the transmission if you abuse the CVT. So you can’t operate it like a manual gearbox or even a standard automatic. The new technology is available in the Nissan X-Trail (tested May 14), although the X-Trail I had was equipped with a six-speed manual transmission.

The turbo-petrol engine Acenta did not have any of the useful safety features under the umbrella of the Nissan Intelligent Mobility (NIM) such as the blind spot warning, cross traffic alert and moving object detection, to name some, that the X-Trail had. They are only offered on the Tekna derivatives. In this line-up.  Which is a pity.

Dubbed the City Crossover by Nissan’s marketing gurus it’s small enough to feel at home in the congested streets and a perfect fit for the family who wants to take the long, open road to anywhere.

Some of the cosmetic changes include new 17-inch and 19-inch alloys, depending on the model; the integrated front bumper and new face with Nissan’s iconic “V-motion” grille, headlights and revised rear light cluster. Inside,  there is a new square bottomed multi-function steering wheel, adjustable for tilt, wrapped in leather; and an updated infotainment system.

While leather seats are available in the Tekna, the cloth covered seats in the Acenta are more than comfortable and offer good lumbar support.  The two front seats, unusually, can be adjusted for height. There is also plenty of head and legroom for the peanut gallery. Standard are auto headlamps and wipers, LED daytime running lights, climate control, electric windows, cruise control and a comprehensive audio system, including Bluetooth. Oh, the ubiquitous cup holders, two in front, haven’t been forgotten. The Nissan stylists have done an excellent job on the interior and there are premium touches wherever you look. The build quality is excellent:  there were no unexplained rattles. Not even after the cell-walker crashed into me.

The Qashqai is a spirited Crossover and the 1.2 turbo-charged engine has the necessary oomph to overtake in safety when you need to. It also has no problem keeping up with fast-moving traffic although you need to get used to the CVT. The engine puts out 85kW and 190 N.m of torque which doesn’t sound much but it performs happily with the CVT as long as you understand it’s not a manual transmission that you can stir the pot to keep up the revs. The Acenta sticks firmly to the tarmac and it goes where you point the nose. The motor doesn’t ever sound as if it’s under strain and if you’re on a long-distance trip it doesn’t take long to settle into a happy cruising mode. But the CVT does hamper performance a bit. It’s not the first time I’ve driven a vehicle with CVT: the first one was the Mitsubishi Lancer a few years ago and it emitted a sound similar to the one a bicycle makes when you clamp a playing card to the wheel. But it was a long time ago and the technology has improved over time.

If you’re planning a holiday jaunt then the Qashqai’s ample boot has a capacity of 480 litres which expands to 680 litres with the 60:40 split rear seat folded down. Storage spaces for odds and ends are also dotted around the cabin. In this era of fast spiralling petrol prices it is comforting to know that the Acenta is quite miserly with fuel. I recorded figures of just over 6.5litres/100km on a route that included mountain passes, the open road, city driving and on the motorway. For the record the Qashqai can go from  0-100 km/h in 10.9 secs and has a top speed of 185km/h. The Qashqai range comprises the entry level Visia, the Acenta and the Acenta+ and the top spec Tekna derivatives.

The Qashqai 1.2 Acenta with CVT has a price tag of R372 500 and even though it lacks the NIM features you do get a lot of bang for your buck.