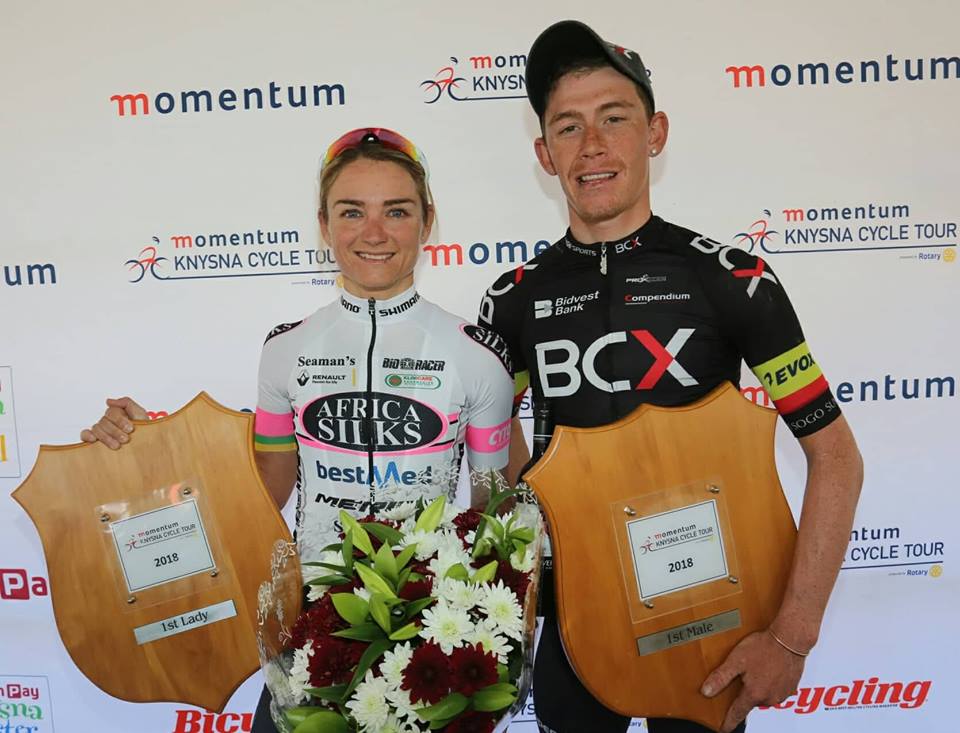 A tired but ecstatic winner of the 115km Momentum Knysna Cycle Tour Road Race, Chris Jooste, BCX, said that he was excited to come to Knysna in the middle of the season, but was not sure what to expect.

“You could have good form, but you could end up having bad legs, and I haven’t raced a lot in the last two months,” he said.

In the end, he found his strong legs and narrowly beat NAD Pro’s Matt Beers in a thrilling sprint to the finish in a time of 2:42:34. Third was Theuns van der Bank in 2:44:12.

“It was a very hard day actually,” says Jooste. A group got away early on the first climb and stayed together up until the Karatara hill, when Beers and Jooste got away and Beers clinched King of the Mountain.

“It was a bit too far from the finish to commit with four guys chasing us and not knowing how far behind the bunch was,” he explains. So, it became a tactical game and on the last climb Matt got the gap.

“It took a big effort to get across to Matt and then we worked together for the last bit. I was confident of being a bit faster than him and also knew that he had done the MTB yesterday, so I banked on him being a bit tired and it worked out well.”

Beers, who was also second in Saturday’s 80km MTB event, joked that he was “destined for second” this weekend. “We got away on the first climb with a bunch of strong riders – that was the plan. I knew that if we all worked together that we could pull it off. We needed about a 2-minute gap at the turnaround point and we managed that and then kept it steady up the Karatara climb. Then Chris and I got away and forced the other guys to chase us.

“Everyone knew we were going to attack on the last climb. I made the move – Chris stayed behind then jumped across to me and then drove it all the way home. I raced against Chris at the beginning of the year, so I knew I was going to have my work cut out for me. I had him a little bit and just didn’t get it. But I’m happy with the result. I’ve never done this well in the road race here.”

Anriette Schoeman, who came third last year, was first female over the line in 2:59:56 beating Candice Lill by two seconds and Lucy James by three seconds.

“The guys were riding really aggressively, and it was a high pace the whole way, she says. “Candice rode such a classy race! Hats off to Lucy James as well – she put on a brave fight. We were fighting it out for Queen of the Mountain and, seriously, ride of the day goes to Candice because she was just amazing after a brutal MTB race yesterday. I was lucky to take the win today; I think she had tired legs.”

Marketing Director of the Momentum Knysna Cycle Tour, Andrew Finn said that the weekend of cycling events had gone extremely well, due in part to the fantastic weather. “Yesterday’s conditions were perfect for the mountain bikers with a bit of overnight rain making the forest wet and quite muddy, and today the weather played ball for the roadies with warm temperatures, plenty of sunshine and absolutely no wind.”

All the results from the weekend’s races are on www.racetec.co.za.