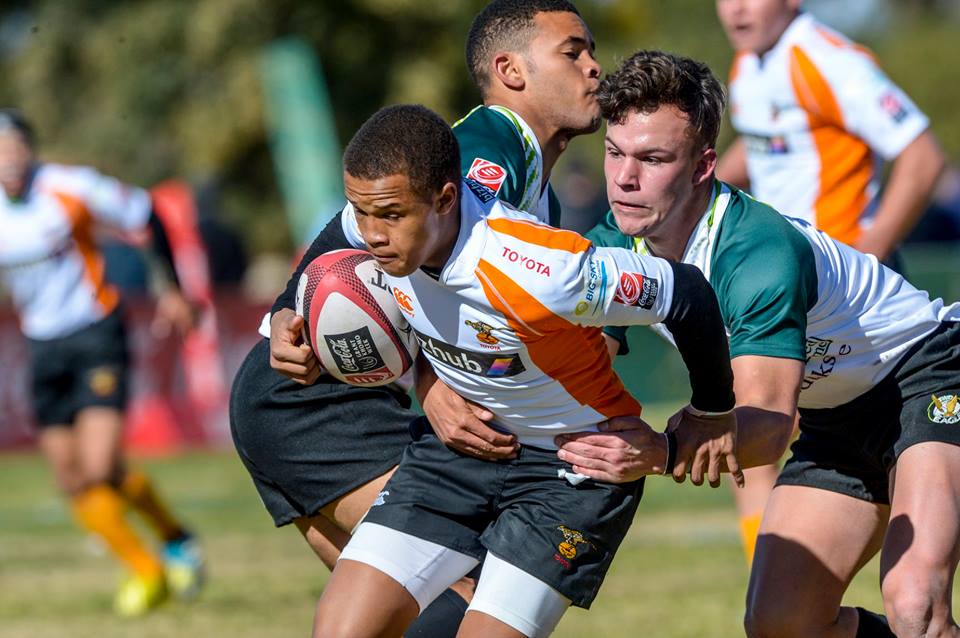 The U13 Coca-Cola Craven Week and U16 Coca-Cola Grant Khomo Week got off to an entertaining start at Hoërskool Diamantveld in Kimberley on Monday with a healthy mix of nail-biting matches and big wins characterising an exciting day’s play.

A total of 58 tries and 346 points were scored in the U13 Coca-Cola Craven Week, and 48 tries and 358 Points in the action-packed day U16 Coca-Cola Grant Khomo Week.

In the U16 tournament, the Thepa Trading Griffons were in sublime form against Namibia to register a comprehensive 57-7 victory, which marked the biggest score of the day. The team stamped their authority early on to build up an encouraging 31-0 halftime lead before increasing their try tally to nine, which included a hat-trick by Paschal Ekeji and two tries by Mzwakhe Khumalo.

A penalty goal in the dying seconds sealed the Free State a 32-31 victory against SWD in a thrilling match in which the George side clawed their way back from 22-5 down to out-score their Bloemfontein counterparts five tries to four. But this was not enough as a penalty goal and drop goal proved crucial for Free State.

The Sharks suffered the same fate to Boland as the Western Cape side kicked a penalty goal on the stroke of full-time to snatch a 27-26 victory. The Sharks dominated proceedings in the first half and earned the rewards with a 19-7 lead, but Boland fought back with intent thanks to a brace by Celino Petersen and a superb kicking display by Hugo Mostert, who converted all three tries and kicked two penalty goals.

The clash between the Valke and Limpopo Blue Bulls was equally competitive, with the Gauteng team’s superior goal kicking nudging them to a 24-23 victory. Limpopo cruised to a 23-7 lead, but the Valke stepped up their game after the break to match their three tries and deny them from adding to their score.

A brace by France Knoetze of the Blue Bulls was equally important for his team as they outscored their Gauteng neighbours, the Bidvest Waltons Golden Lions, three tries to two in a tight match for a 23-17 victory.

Old Mutual Zimbabwe overturned a 14-12 halftime deficit against Border CD to work their way to a 26-14 victory as they showed composure and patience on attack, which allowed them to touch down four times, while they limited Border CD to two first-half tries.

Eastern Province’s accurate goal-kicking and superior attack earned them a 24-5 victory against the Leopards, with Brandon Wilkie contributing 14 points to his team’s score thanks to a try, three conversions and a penalty goal.

The clash between hosts, Griquas, and the King Price Pumas was a tight tussle as both teams tried hard to make their presence felt, and the match played out as such with the visitors taking a narrow 12-10 lead before camping in the home team’s after the break to seal a 30-15 victory thanks to their four tries to two, and two vital penalty goals.

Western Province’s hopes of maintaining their status as the top team, meanwhile, were dealt a massive blow as they went down 16-6 to a determined Border outfit who showed their fighting spirit from the outset. Border flyhalf Sihlalo Benge was the star of the match as he scored all his team’s points with a try, conversion and three penalty goals, while the Capetonians’ only points were compliments of two penalty goals.

In the U13 Coca-Cola Craven Week, DHL Western Province earned the highest score of the day as they defeated the Leopards 44-5 thanks to a classy attacking performance and a tenacious defensive effort. In total they scored eight tries, three of which were scored by Clemond Nel, while the Leopards had to settle for one.

The Itec Blue Bulls also got their campaign off to a strong start as they outplayed the Sharks 34-0 thanks to a fine attacking performance and solid defensive effort.

Boland, meanwhile, found their rhythm in the second half against the Pumas which paved the way for their 37-10 victory. The sides entered the break tied at 5-5 before the Western Cape team increased their try tally to six, while limiting the Pumas to only one in the second half.

The Thepa Trading Griffons ran in five tries to two second half tries by Border CD for their 31-7 victory, while SWD registered a 24-0 win against Namibia, who fought hard, but were unable to stop the George side from scoring four tries, while they failed to breach the defence.

The Bidvest Waltons Golden Lions’ delivered a balanced showing against Border which saw them play their way to a 29-7 victory, as they as dominated possession and did well to capitalise on their try-scoring chances to touch down five times.

Forever Resorts Limpopo built on their 12-7 halftime lead against Old Mutual Zimbabwe to score outscore them four-tries to two for a 24-14 victory, while Free State bounced back from a two-point deficit against the ITS Valke to work their way to a hard-fought 24-21 victory as they scored four tries to three by their opponents.

The clash between hosts, Xerox Griquas and Eastern Province was nail-biting, with a penalty goal proving decisive in the Eastern Cape side’s 18-17 victory. Both sides scored three tries, which saw the clash come down to goal kicks.