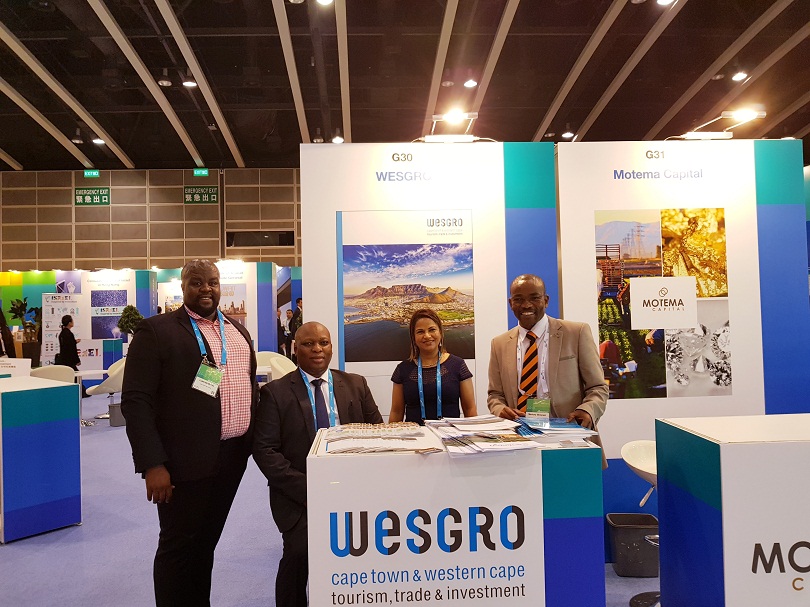 Eden District Municipality (Eden DM) was invited by the Hong Kong Trade Development Council to attend the Belt and Road Summit on the 28th of June 2018.

The Belt and Road Summit is an initiative that drives the global economy by fostering the development of regional infrastructure and connectivity, as well as, investment and economic co-operation. This summit was attended by the following Eden DM delegates:

During the summit, the Eden DM delegates interacted with various business representatives with regards to investment opportunities in the region and in collaboration with WESGRO, promote the region as an investment destination. The aim of this was to sell the potential the district has, as it was tabled by various B-Municipalities during the Garden Route Investment Summit, held at Oubaai in March 2018. The region as a tourism destination was vigourously promoted, not only to the Chinese and Hongkong representatives at the summit but also to other internationals who attended the summit.

An Africa Investment Round Table discussion was also hosted and facilitated by the Hong Kong Trade Development Council.   During this session,  African representatives were given the opportunity to present their investment potentials to various companies in China and Hong Kong.  The purpose of these discussions was to promote possible collaboration and partnerships, especially from Infrastructure and Tourism opportunities.

The Eden Team, led by the Executive Mayor, Cllr Memory Booyson also met with South Africa’s Consul-General to Hong Kong, Mr Madoda Ntshinga, who linked up the District with possible investment opportunities, in Hong Kong and China mainland. The Consul-General further committed to inviting the District, together with businesses to various marketing platforms in Hong Kong.

Furthermore, a range of meetings and site visits took place from the 22nd  to 26th of June 2018 in Shanghai.  This included a visit to an indigenous and traditional medicine laboratory, owned by a Shanghai Pharmaceuticals Holdings Co.   The Eden DM representatives were hosted by Dr Hongbin Cheng from the China-South Africa Bridge (CSA), who facilitated business meetings with the Shanghai Business Chamber representatives. The Eden Team was joined by the Trade Commissioner from South Africa’s Consulate-General’s Office in Shanghai, Mr Thulani Mpetsheni who provided support in the several meetings held. The businesses included in these meetings were:

The meetings with the abovementioned companies were also attended by Ms Rehana Boolay, Investment Specialist for China Trade and Investment Facilitator between China and the Western Cape.

It is envisaged that an extended business delegation from China will visit the Garden Route in September 2018 in follow-up discussions, and to also concretize the various bilateral agreements.  The purpose of the visit is also for Chinese to familiarise themselves with the region, investment opportunities and to meet the local municipalities and relevant private sector stakeholders.  More information will be made available as progress is taking place.