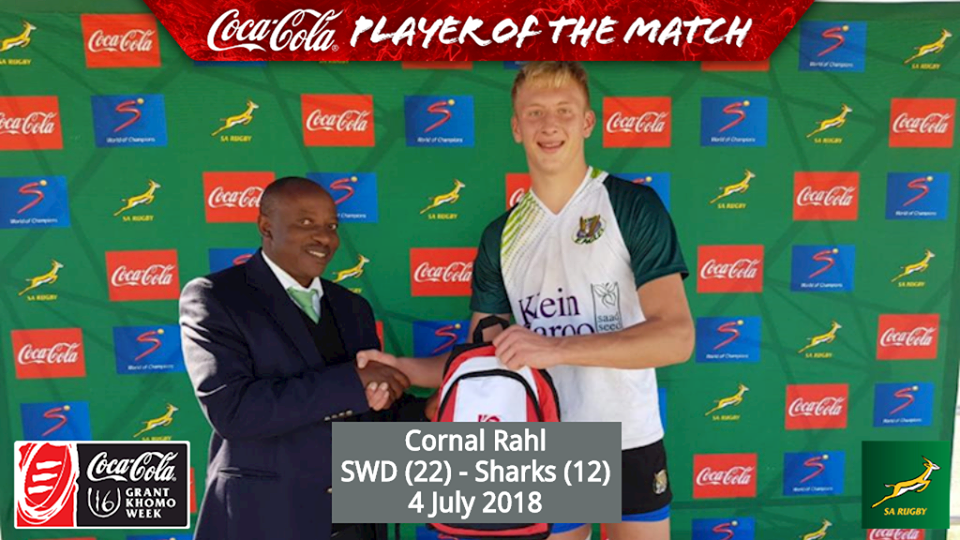 Free State, the Blue Bulls, Eastern Province and Valke stamped their authority on their opponents in an action-packed second round of the U16 Coca-Cola Grant Khomo Week at Hoërskool Diamantveld in Kimberley on Wednesday to remain the only unbeaten teams going in Friday’s final round.

Boland got out of the blocks quickly against Free State to build up a 17-10 lead, but a strong showing by the Bloemfontein outfit saw them fight back to secure an impressive 50-22 victory and the biggest score of the day. The team applied sustained pressure thanks to their committed attack, skilful handling and fantastic support play, and it paid off as they managed to navigate their way to the tryline regularly to score seven tries to Boland’s three.

Braces by the Blue Bulls’ Bjorn van Wyk and Lincoln Adams powered their team to a 28-18 victory in a bruising encounter against Border. The Pretoria side’s ability to convert half chances into tries handed them the edge. Each team crossed the tryline only once in the first half, but three second-half tries by the Bulls to only one by the opposition sealed the victory for them.

Three penalty goals by the Valke, meanwhile, proved to be crucial in their 31-24 victory against the Thepa Trading Griffons as both teams scored four tries in a tightly-fought battle. Such was the closeness of the match, the Welkom side held a narrow two-point lead at the break, and with both sides putting their forwards and backs to good use, the penalty goals nudged the Valke to their second victory.

Eastern Province also continued their winning ways with a 24-14 win against the King Price Pumas after building up an encouraging 17-0 lead at the break. Brandon Wilkie was in fine form for the Port Elizabeth outfit as he scored a try, three conversions and a penalty goal for his 14 points. The Pumas showed their fighting spirit after the break to score two converted tries, but this still left them short.

A hat-trick by Namibia’s Divan van Vreden and a fine kicking display by Schano van Rooi steered the team to a rewarding 42-6 victory against Border CD and their first win in the competition. Their solid attacking performance, ability to contest at the breakdowns and their tough defensive effort saw them take a 28-0 lead at the break before finishing the match with six tries, while the Eastern Cape team had to settle for two penalty goals.

DHL Western Province bounced back strongly from their defeat on Monday to beat the Bidvest Waltons Golden Lions 38-12 thanks to their physicality and a solid performance all-around. The Capetonians led 17-7 at the break. They maintained their dominant form in the second half to run in five tries to two by their Gauteng counterparts. Centre Ethan James contributing 18 points thanks to a try, five conversions and a penalty goal.

It was also a good day for hosts, Griquas, who cruised to a 38-12 victory against Old Mutual Zimbabwe with their superior attack earning them six tries to two by the visitors. Such was their dominance, they led 21-0 at the break and they continued to stamp their authority as the match progressed. Muller Du Plessis scored two of his team’s tries, while Zimbabwe’s two were compliments of Gaza Kagande.

SWD overcame a tight first half against the Sharks, in which the teams were tied at 5-5, to dash their way to a 22-12 victory. SWD’s raw pace out wide was too much for the Durbanites as they laid a solid platform with their forwards and then spread the ball out wide to their speedy backs, which earned them three tries to two by the opposition’s Sali Mlenzana.

The clash between Limpopo and the Leopards was physical as both teams tried hard to gain acendency, but the Leopards’ ability to capitalise better on their point-scoring chances earned them a 17-10 victory. The Potchefstroom team was 12-3 up at the break and they added their third try in the second half, which was enough to keep them ahead as Limpopo only earned a converted try and penalty goal for their efforts.

The U13 Coca-Cola Craven Week teams will return to the field on Thursday for their third round of matches, while their U16 counterparts have a break to prepare for the final round of both tournaments on Friday.