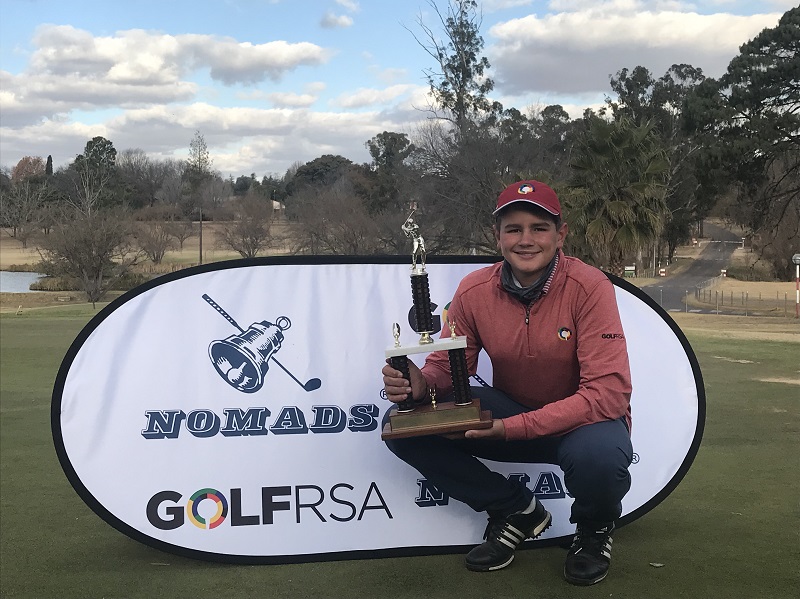 The 14-year-old from Boksburg left a another significant footprint in South African junior golf with his victory in the Nomads SA Boys Under-17 Championship in Mpumalanga on Friday.

He demonstrated why he is considered one of the dominant forces in junior golf this year when he closed out victory on 10-under 206 at Middelburg Country Club. The 2017 English Under-14 Boys champion barely broke sweat as he fired eight birdies in the final round for a flawless 64 to win by two shots from Gauteng golfer Cole Stevens.

“I’m stoked about this win, because I had to come from behind to take the title,” gushed the delighted Jarvis. “The conditions were really tough in the morning with an ice cold wind blowing, and the wind never let up throughout the day.

“I hit my irons and wedges really good and I gave myself opportunities to score. The putter worked well too, although I left a few out there. Every time I was in trouble, I hit great recovery shots and made key par-saves to keep the momentum going. That was the key to my win.”

Jarvis headed into the final round five shots behind joint leaders Martin Voster and Ryan van Velzen on seven-under, but threw down the gauntlet early on with a birdie-birdie start. He shortened the gap on the frontrunners with further gains at six and eight.

“I hit lob-wedge to five foot and made the putt at the first” said Jarvis. “I pulled a 6-iron left of the green at the second, but I made a good up-and-down for birdie.

“I hit a lob-wedge close at the third. The ball spun off the green, but I made a good up-and-down to save par. At six, I hit an 8-iron straight at the pin and nearly holed out. I boxed the five-footer for birdie and tapped in for birdie at eight after hitting another good lob-wedge close to the pin.”

“On the last hole, I hit my drive into the trees right. The ball dropped straight down and I had a tricky lie, but I could see the pin. I hit my best shot of the day, a great punch shot that finished two foot right of the hole. It was really awesome to finish with a birdie.

“Everyone is asking about the Nomads SA Boys Under-19 title now. Of course I want to win it, but it’s never a good idea to get ahead of yourself. I just want to enjoy this win with my family and my coach, Grant Veenstra for now; plenty of time in the future.”

Stevens from Parkview was six-under and one off the pace at the start of the final round. The South African Golf Development Board golfer had five gains for a two-under 70 that saw him finish alone in second.

Vorster from Southern Cape golfer took third on six over with a 73, and Gauteng junior Kieron van Wyk – another member of the South African Golf Development Board – posted 71 to finish in sole fourth on five under.

Van Velzen from Ekurhuleni closed with 76 to tie for fifth with first round pacesetter Samuel Simpson from Western Province, who registered a final round 71.

Ayden Senger from Western Province finished seventh on 214, Gauteng North’s Christiaan Maas was eighth on 215 and Ekurhuleni’s Yurav Premlall rounded out the top 10 with Alessio Graziani from Gauteng North on one-over-par 217.