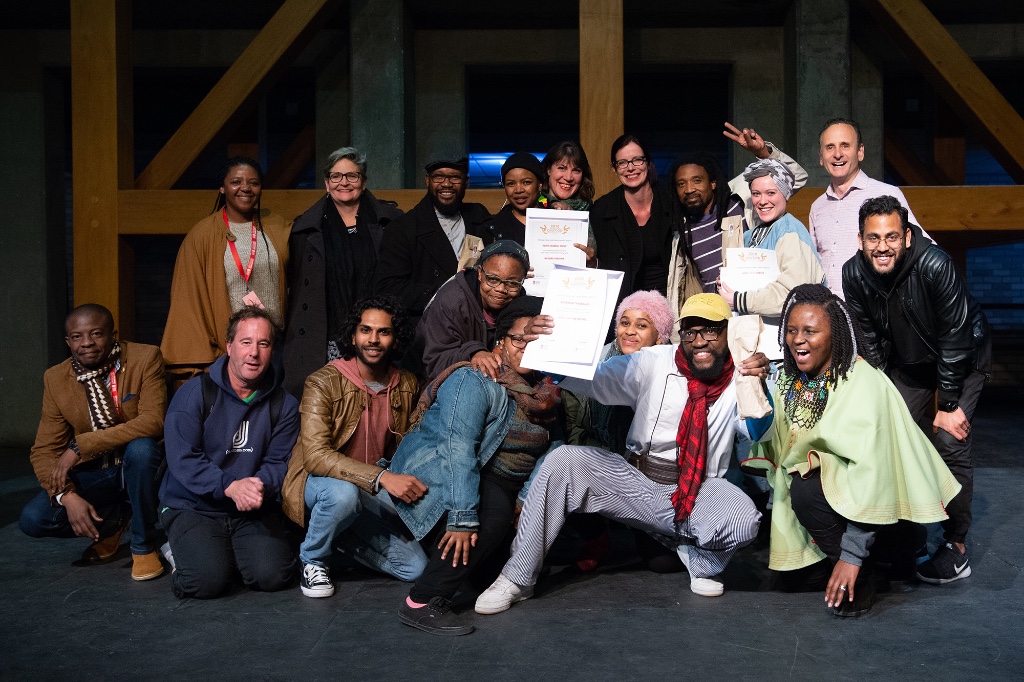 With more than 100 productions premiering on the Fringe at the 2018 National Arts Festival, this year’s winners of the Standard Bank Ovation Awards have emerged as being among the best of the best.

The awards recognise stand out performances, innovation as well as successful challenges to the boundaries of creativity and were announced at a ceremony at the National Arts Festival on Saturday night.

“From the solo performers, carrying their set in a hold-all, to the epic four-dozen strong cast of the Amandla Danca Teatro ZA company for EMATHONGENI, with their van laden with instruments and costumes, the Fringe had it all and continues to be the largest platform in South Africa for artists to share their wealth of talent and audiences to bask in the magic and wonder of it all,” says Tracey Saunders, convenor of this year’s awards.

Because of the emphasis on excellence, the Ovation Awards help audiences – and producers – to identify quality work on the Fringe. The awards also act as a bridge between the Fringe and the Main programme, with all winning productions invited to put forward proposals for the Arena programme.

Saunders works with a panel who, between them, see almost every new production on the Festival Fringe. “As has been evident in recent years, the Fringe reflects the zeitgeist of the nation and one was left with very little doubt that we are a country reeling under the tyranny of male violence and sexual assault. Theatre and even dance productions addressed these themes, some more successfully than others. There were those who simply mirrored our society back at us, an uncomfortable experience for 60 minutes in a darkened theatre. Others presented causes, motives and possible solutions and one walked out of the venue with a faint glimmer of hope.”

Since the awards’ inception in 2010, there have been 167 Standard Bank Ovations awarded, with the majority of those – 105, in fact – being for theatre. A total of 57 Silver awards and only 17 Golds have been awarded.

This year’s Gold Ovation Winners reflect the success of art forms that fall outside the traditional definitions of theatre, says Saunders.

In J BOBS LIVE, Jefferson Tshabalala presents “a game show style, interactive, hilarious and thought-provoking event, which encourages self-reflection and a deeper appreciation of the challenges that South Africans face”.

MEDUMO YA BORWA celebrated the history of the monarchy in a feast of song and dance with an aesthetic that made use of South African traditional attire, and SULLIED, which although primarily a dance piece, wove poetry and spoken word in between the carefully choreographed movements, stitched with pain and wrapped in kangas.

“One of the characteristics of work that struck a nerve was that it wasn’t presented exclusively in English. Xhosa, Pedi, Sotho, Tswana,” says Saunders. “Each and every one of the official languages resonated across the stages and if you were looking for a whirlwind tour through the regions of South Africa, a ticket on the Fringe would have guaranteed you that.”

This year, the student work that was staged alongside other Fringe productions held its own and a number of works presented by recent alumni of tertiary institutions were deeply satisfying and highly entertaining (a press release about the winners of the Student Awards will follow).

“While awards are essentially a subjective measure of an art form which is essentially immeasurable, they are not infallible. But given the continued success of various award winners over the years, the Ovations are as a reliable predictor as any of who and what to watch.”

MEDUMO YA BORWA (The best African Song and Dance thriller)

THE REVLON GIRL – Search for Productions

MEDUSA INCARNATE – Kate Pinchuck in collaboration with The Furies

THE DEAD CHANT IN DEATH – Tshwane University of Technology

Standard Bank Ovation Encore Awards recognise merit and potential in works that can be developed.

PREVIOUS WINNERS OF THE STANDARD BANK OVATIONS INCLUDE

2018 Standard Bank Young Artist for Theatre Jemma Kahn – Two Silver Awards (The Epicene Butcher and Other Stories for Consenting Adults in 2012; We Didn’t Come to Hell for the
Croissants: 7 Deadly New Stories in 2015)

ExploSIV Productions – six, with one in partnership

The 2019 National Arts Festival will take place from 27 June to 7 July.

The Call for Proposals for 2019 National Arts Festival Main programme is now open. See this link for further details. Deadline for submissions is 15 August 2018.

Keep up with the Festival by following:

Use and search by #NAF18