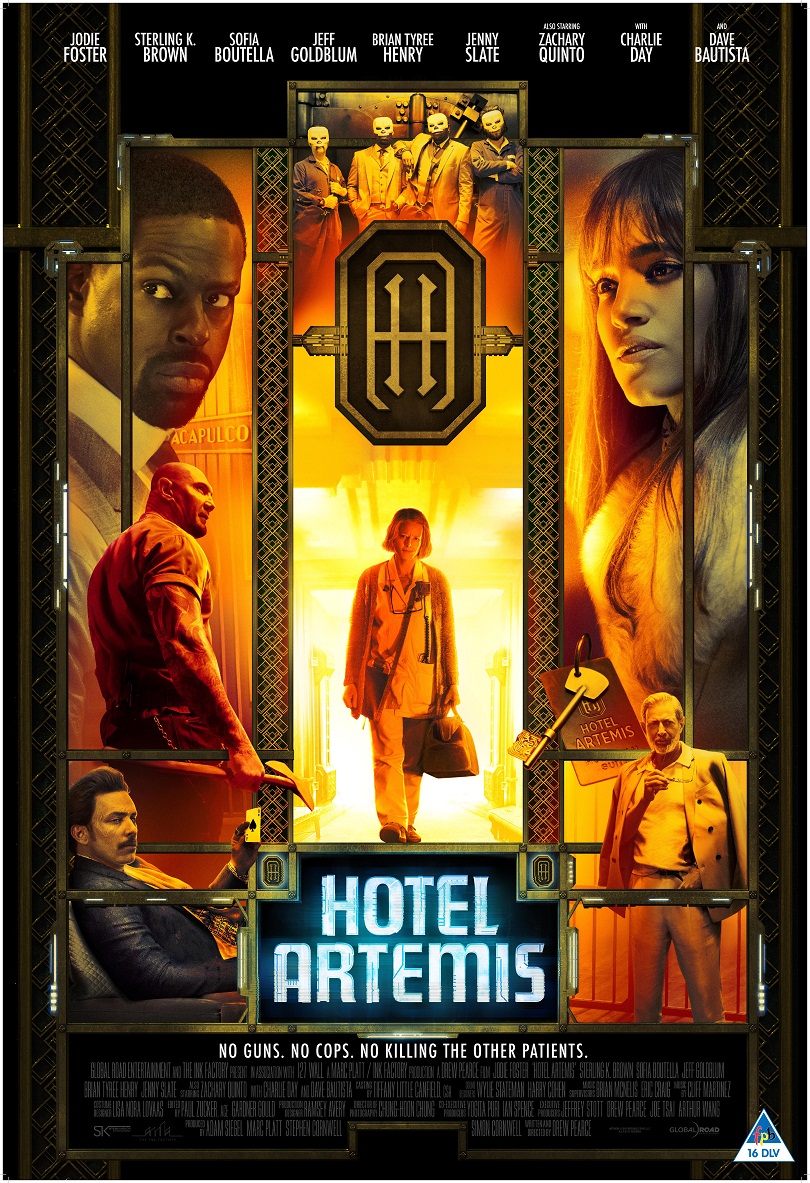 Got hurt during a heist, battered during a bank robbery or shot pulling a shady job? Then make a reservation at Hotel Artemis – a secret, members-only hospital for criminals.

Explaining the rationale behind the film, Pearce says: “I wanted to make something that’s more esoteric, that reminded me of the films I loved when I was younger, and that didn’t feel too cookie-cutter or overly streamlined.”

Most of the movie takes place inside the Hotel Artemis, a secret high-tech emergency room that caters to criminals, which serves as an evocative backdrop for a mix of extreme characters. Run by The Nurse (Jodie Foster), with the help of her strong-arm orderly Everest (Dave Bautista), the hospital uses technologically advanced equipment – think 3D printers and nanotechnology – to fix up criminals in need.

It’s 2028, and it’s a busy night for the Nurse as she finds her “hotel” at full capacity amid water-related riots in Los Angeles. While dealing with a variety of idiosyncratic guests, known only by the room in which they are staying, her rules (including no weapons and no murdering other patients) are put to the test.

Guests at Hotel Artemis include Sterling K. Brown as an out-of-luck bank robber with a badly wounded younger brother (Brian Tyree Henry), and Charlie Day as an annoying con artist, while Sofia Boutella impresses as a French assassin, who shows up at the hotel on business. Add to that the arrival of the toughest mobster in Los Angeles, the man known as the Wolf King (Jeff Goldblum), and things are bound to get interesting.

With Oscar-winner Foster’s welcome return to the big-screen after five years (her first acting role since Elysium), Pearce manages something unusual for a mainstream action-thriller; HOTEL ARTEMIS is more character-based than action-oriented. Foster is compelling as a woman with a troubled past, and Brown comes across as a heroic figure. The film brings out the best in the fine ensemble cast, with an undercurrent of dark humour that keeps things engaging.

Talking about her role, Foster says: “I’m happy with my performance in the film because I feel like it’s a combination of grounded and emotional, and there’s a kind of wisecrack feeling to it as well. That’s really what I was looking for: the opportunity to have more of a transformation, to play a character role but still to inhabit the character with emotion.”

Everything, from the cinematography to the sets, makes it feel like a Los Angeles action film with a sci-fi twist. The action, though sparse, is intense and kinetic. In addition, HOTEL ARTEMIS unfolds like a top-notch crime thriller, with character motivations and plot twists weaving in and out of each other.

With Hotel Artemis a last resort for the lawless, and with tensions continuing to rise, you’ll be on the edge of your seat waiting to see how Pearce brings everything home.

HOTEL ARTEMIS is distributed by Filmfinity (Pty) Ltd. and will be released nationwide on 3 August 2018.