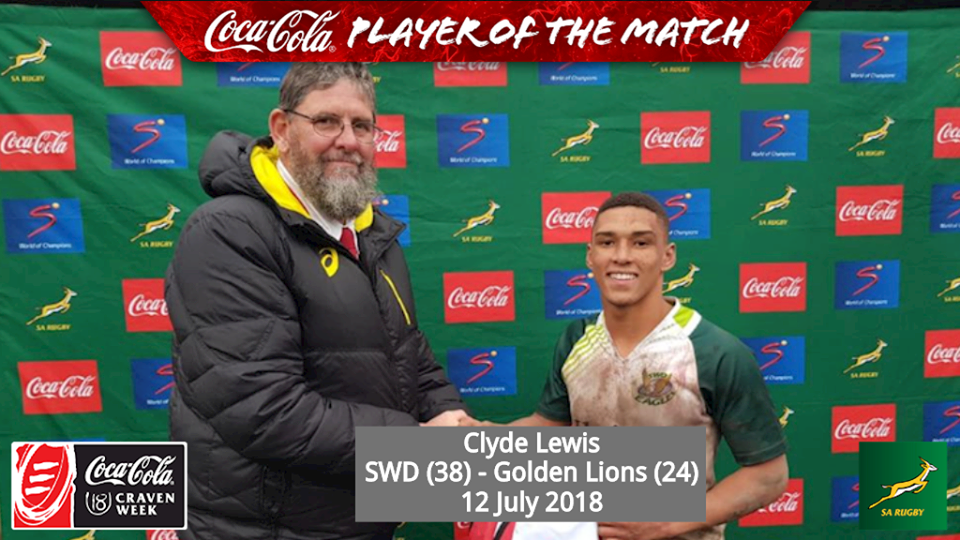 Not even the cold and wet conditions could put a dampener on the spirits on the fourth day of the U18 Coca-Cola Youth Weeks at Paarl Boys’ High’s Brug Street grounds on Thursday, with the Sharks, DHL Western Province XV and Boland continuing their winning ways in the U18 Coca-Cola Craven Week, and Free State, SWD, the Thepa Trading Griffons in the Coca-Cola Academy Week.

For the fourth straight day the stands were packed, despite pouring rain at times, as the players delivered a top-class display of junior rugby in a fantastic showcase of the talent on offer.

In the main game of the U18 Coca-Cola Craven Week, the Sharks controlled their clash against the Free State and did well to pounce on the opposition’s mistakes for a 29-20 victory. Three of the Durbanites’ five tries were scored from Free State mistakes, which proved vital in the result as the Bloemfontein side fought until the final whistle in the hope of sneaking in for a win. The Sharks, however, defended like demons to shut them out in the dying minutes, which allowed them to hold on for the victory.

A man-of-the-match performance by Boland flyhalf Lionel April steered the Western Cape side to a 19-17 victory in a nail-biting clash against the Ultimate Aim Blue Bulls. April was in sublime form as he scored two of the team’s three tries – one of which was the winning try late in the match – and kicked two conversions to add to another by Shane-cole Williams. This allowed them to nudge their way past the Pretoria side on the scoreboard for the win after trailing 17-14.

The DHL Western Province XV built on their strong form in their opening match on Tuesday to defeat NWU Valke 26-8, scoring three tries to one, with Allister Williams dotting down twice. The home side produced a dominant performance on attack and supported this with a dedicated defensive effort, which saw them concede only a try and penalty goal.

SWD camped in the Bidvest Waltons Golden Lions XV’s half for most of their match and the pressure paid off as they played their way to a 38-24 victory. Both teams showed commitment on attack and defence, but SWD made better use of their opportunities to touch down six times, while they limited the Gauteng side to four. Vernon Paulo scored a brace for SWD, while Clyde Lewis also made a valuable contribution with a try and four conversions.

The clash between the Leopards and Griquas was physical as both teams tried to use their big forwards to gain ascendancy, but the Potchefstroom team’s ability to round off their chances earned them two tries to none for a 17-6 victory. Griquas tried hard to break through the defence and they made their way close to the tryline on a number of occasions, but they were shut out consistently and had to settle for two penalty goals to get onto the scoreboard.

In the Coca-Cola Academy Week, Free State overturned a 13-10 halftime deficit to outscore the Blue Bulls four tries to three for a well-earned 29-18 victory. Tafadzwa Pikirayi scored two of the Bloemfontein outfit’s tries as they delivered a balanced showing between their forwards and backs to work their way onto the front foot for the victory.

SWD were in fine form against Eastern Province CD with a classy attacking display and effective defensive effort earning them a convincing 45-15 victory. Rowan Jumat and Ray Stammer both contributed braces as the team ran in an impressive seven tries, while they stood their ground on defence to limit to the opposition to two tries and a penalty goal. 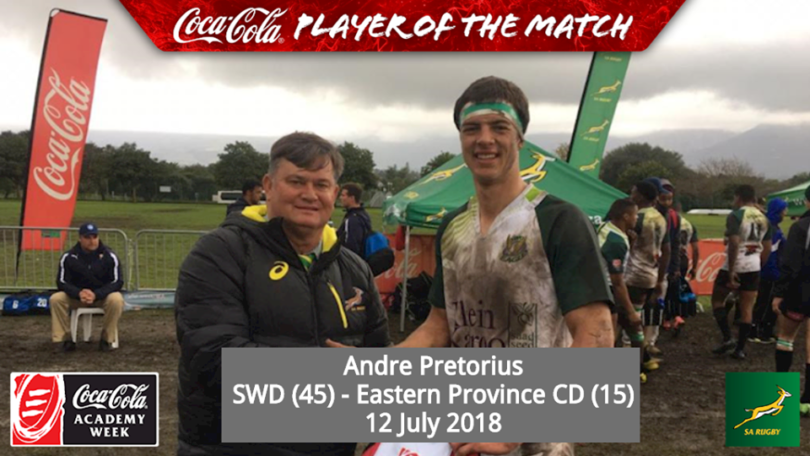 The Thepa Trading Griffons CD overcame a hard-fought first half against Border CD to register a 17-8 victory after a narrow 7-3 halftime lead. The team showed patience on attack and did well to capitalise on their try-scoring chances and the rewards followed as they outscored the Eastern Cape outfit three tries to one.

Limpopo retained possession and applied consistent pressure on DHL Western Province XV, while the made the most of their point-scoring chances to earn a 25-14 victory. The Limpopo side were 12-7 ahead at the break and they added their third try in the second half to take a 19-14 lead before kicking two vital penalty goals in the dying minutes to push the match out of range for the home side.

The clash between Griquas CD and Pumas CD was nail-biting as both sides ran hard on attack in an attempt to force their way over the advantage line, which resulted in little separating them on the field. Griquas CD edged 14-7 ahead at the break, but in the end both sides scored four tries and converted three, which forced them to settle for a 26-26 draw.

The Bidvest Waltons Golden Lions and Eastern Province also played to a 21-21 draw in an epic clash, in which neither team was able to gain ascendancy throughout the clash. The teams each scored two penalty goals in the first half and added two tries and a penalty goal after the break to level the scores once again, and that proved to be the end result.

The Thepa Trading Griffons ground out a 15-6 victory against the Bidvest Waltons Golden Lions XV in a tightly-fought game. Such was the closeness of the match the Welkom held a slender 5-3 lead at the break, before adding their second try and a penalty goal in the second half. The Johannesburg side, meanwhile, had to settle for two penalty goals as they battled to break through the defence.

The teams will have Friday off to rest before taking to the field in a jam-packed closing day on Saturday.