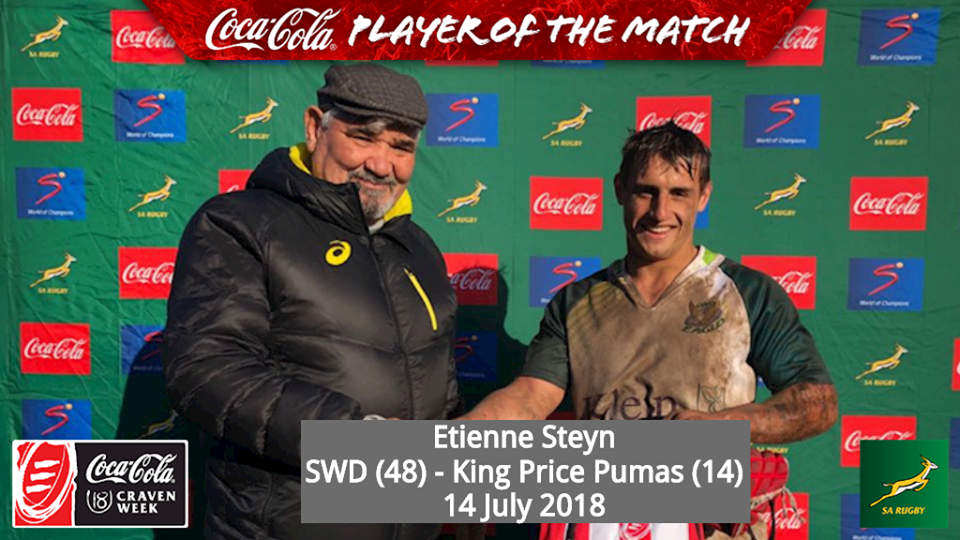 DHL Western Province delivered a classy display in the final match of the Coca-Cola Academy Week on Saturday to take top honours on their home turf with a stylish 73-0 victory against the Free State to remain one of three unbeaten teams. 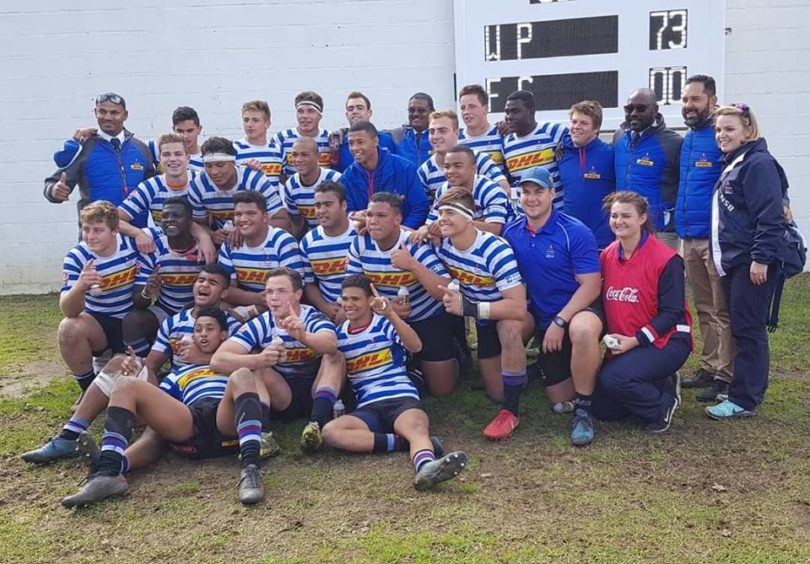 The other unbeaten sides were SWD and Old Mutual Zimbabwe.

DHL WP blew the Free Staters away with their dominant attacking display to cruise in for 11 tries, while their watertight defensive effort denied the opposition from scoring a point. Jarod Cairns scored two of their tries as 10 players crossed the chalk, while Charl Janson scored a try and slotted over eight conversions for a memorable personal total of 21 points.

SWD ran riot against the Valke thanks to their patience and innovation on attack, with the team crossing the tryline a whopping eight times for their 45-12 victory. Jonathan Joseph and Ray Stammer each scored twice in impressive individual performances, while the boys from the Southern Cape delivered a committed defensive effort to limit the Valke to a try per half.

In the international, a brace by Old Mutual Zimbabwe’s Pride Gadzikwa and a fine kicking performance by Tinashe Hombiro, who converted all three of their tries and kicked two penalty goals drove the team to a 27-6 victory. Both teams showed determination to come out tops, but Zimbabwe’s ability to capitalise on their chances was the difference between the sides on the day.

The Blue Bulls produced a strong performance against Build-it Border to power their way to a 38-17 victory as they ran in six tries to three by the East London side. The Pretoria team built up a 24-12 halftime lead and they continued to make their presence felt in the second half, with Duwane Pietersen touching down twice, while Steyn van der Spuy also made a valuable contribution with a try and four conversions for a personal total of 13 points.

The Blue Bulls CD overturned a 22-14 halftime deficit to a 33-22 victory against DHL Western Province CD thanks to a hat-trick by Shayne Bolton and an accurate kicking display by Ethan Wentzel, who converted four of their five tries.

Eastern Province CD’s superior goal-kicking nudged them to a 31-27 victory against Griquas in a tight clash in which both sides scored five tries. The Eastern Cape outfit were 19-10 ahead at the break, and despite being out-scored three tries to two in the second half, they managed to hold on for a victory thanks to three successful conversions to one.

The Limpopo Blue Bulls dominated their clash against the Pumas completely to secure a convincing 25-0 victory. The Pumas tried hard to contain the opposition on defence, but they leaked three tries and conceded kickable penalties, which Limpopo’s Brandon Cronje took advantage of, which allowed them to keep the scoreboard ticking throughout the match.

The Sharks overcame a competitive first half against the Bidvest Waltons Golden Lions in which the sides were level at 7-7 to break away for a rewarding 24-10 victory thanks to their four tries to one. Both sides used their forwards to lay a solid foundation up-front, but the Durbanites’ ability to use their try-scoring chances ensured that they finished the tournament on a winning note.

Eastern Province handed the Thepa Trading Griffons their first defeat in the tournament as they staged a dramatic comeback from 13-5 down to register a 22-13 victory. The Port Elizabeth team remained composed after the break and took their chances as they arose to touch down three times, while they denied the opposition from adding to their score.

Boland dominated their clash against the Bidvest Waltons Golden Lions XV and they backed this up with a solid defensive effort for a 20-8 victory. The first half was closely contested with Boland scoring a try and penalty goal, while the Johannesburg team could only manage a penalty goal for their efforts. Two second-half tries by Boland to one by the Bidvest Waltons Golden Lions XV, however, steered them to victory.

A strong first-half showing by the Leopards paved the way for their 19-8 victory against Griquas CD. The team built up a 14-3 halftime lead, which proved vital as each side crossed the tryline only once in a hard-fought second half. Andre Smit was in fine form for the Potchefstroom team as he scored two of their three tries.

Border CD fought their way back from 14-6 down to pip the Learners with Special Education Needs (LSEN) week team 20-19 in a nail-biting encounter. Both teams tried hard to make their presence felt on attack and it was evident in the result. Interestingly the Eastern Cape scored one less try than the LSEN team, but two crucial penalty goals edged them into victory.

The Sharks CD ground out a 10-8 victory in an epic clash against the Thepa Trading Griffons CD, with a successful conversion proving to be the difference on the scoreboard. Neither team was able to gain ascendancy, which saw both sides only cross the tryline once and each kick a penalty goal, but the KwaZulu-Natal’s conversion proved vital in the result.

The Pumas CD and Valke CD, meanwhile, had to settle for a 10-10 draw in the other gripping encounter in which both teams gave everything, but neither side was able to stamp their authority. The sides entered the break level at 5-5, and they each added a try in the second half, which they could not add to, resulting in a tie.