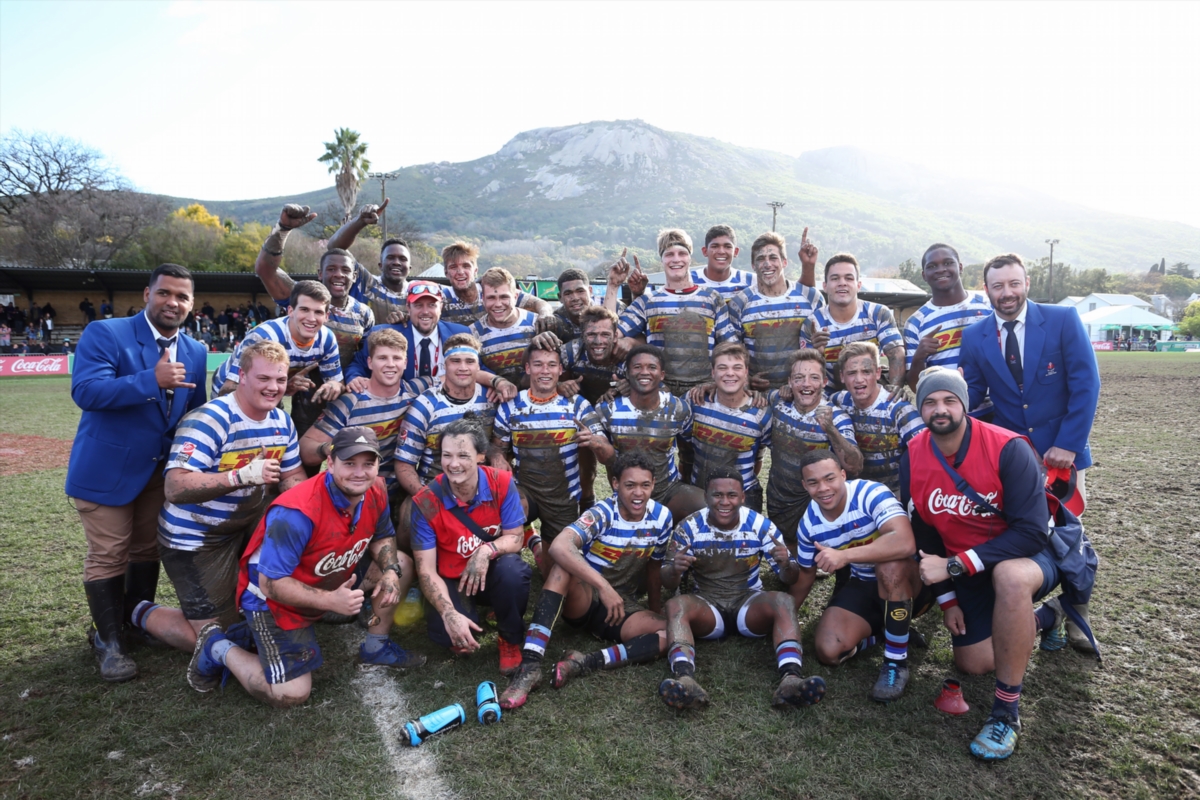 DHL Western Province powered their way to a 47-8 victory against the Sharks in a physical finale to U18 Coca-Cola Craven at Paarl Boys’ High’s Brug Street Grounds on Saturday to complete a rewarding day for the union after they also emerged as the top side in the Coca-Cola Academy Week.

The victory ensured that they were one of only three teams who finished the tournament unbeaten, with the DHL Western Province XV and Build-it Border also continuing on their winning ways.

The hosts dominated possession in the first half and used their opportunities, which paid off as they built up a 14-8 halftime lead. DHL WP continued to make their presence felt after the break with their forwards and backs doing their bit to force the team onto the front foot and the rewards followed as they added five tries to take their tally to seven. Juan Mostert scored twice, while Kade Wolhuter kept the scoreboard ticking with five conversions.

Build-it Border were in command from the outset against Free State as their forwards and backs made their presence felt and forced their way over the advantage line consistently to power the side to a 33-17 victory. Jordan Janse van Rensburg crashed over for two of his team’s five tries, while Thomas Bursey kicked four conversions. In turn they limited the Free State to three tries to come out on top.

The DHL Western Province XV held their nerve in a tight clash against the Ultimate Aim Blue Bulls with a strong first half putting them in the driving seat for a narrow 20-16 victory, which ensured that they remained unbeaten. The home team played their way to a 15-0 lead, before facing a determined second-half fight-back by the Pretoria side in which they scored all 16 of their points. But it was not enough as DHL Western Province XV held on for the result.

The Bidvest Waltons Golden Lions proved too powerful for Boland as they dominated the clash physically and retained possession for long periods, while they did well to break through the defence for a comprehensive 51-12 victory. Such was the high quality of their attack they raced to a 32-7 halftime lead, and they maintained this form as the match progressed, which saw Franco Schutte and Henco van Wyk contribute braces as the team touched down seven times to two by Boland.

SWD were in fine form on attack against the King Price Pumas as they scored an impressive eight tries in foggy morning conditions for a rewarding 48-14 victory. The team powered their way to a 31-14 lead thanks to a balanced performance between their forwards and backs, and they built on this in the second half, which saw Janco Klinck earn his hat-trick and Ridge Gaffley a brace. They supported this with a solid defensive effort to deny the Mpumalanga side from adding to their score.

The Blue Bulls XV’s superior ability to round off their point-scoring chances guided them to a 29-17 victory against the Bidvest Golden Lions XV after taking a narrow five-point lead at halftime. Both sides put their physical forwards to good use in an attempt to work their way onto the front foot, but in the end the Blue Bulls XV’s four tries to three by their Gauteng neighbours, and a solid kicking display by Dieter Crafford who scored three conversions and a penalty goal sealed the win for them.

Bidvest Waltons Griquas’ accurate goal-kicking steered them to a 24-15 victory against the Ultimate Aim Limpopo Blue Bulls as both teams crossed the chalk three times. The Limpopo side scored all of their points before the break, while the Kimberley side scored two converted tries to trail by a point at halftime. Their third try to add to three conversions and a penalty goal by SJ Oberholzer, however, sealed the victory for them.

Eastern Province dominated the first half against the Leopards as they ran hard on attack and stretched the defence wide, which paved the way for them to outscore the Potchefstroom side three tries to one for a 21-10 victory. Their efforts saw them take a 14-3 lead halftime lead, and they managed to stand their ground in a competitive second half for the victory.