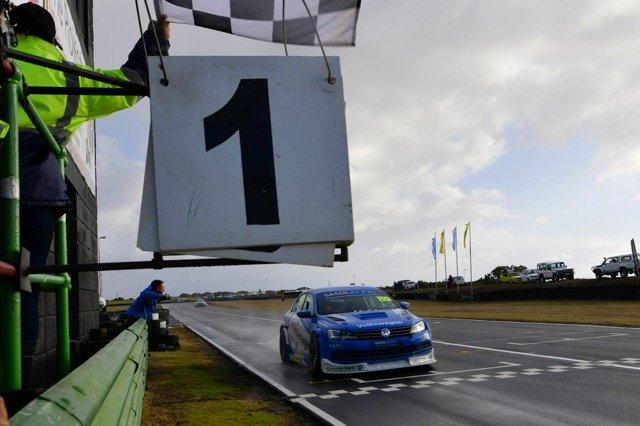 Brian Joss – Daniel Rowe scored an emphatic victory in the second Sasol GTC race at Aldo Scribante in Port Elizabeth on Saturday, to become the driver with the most wins in the series so far this season.

The Volkswagen Motorsport squad, racing in their own back yard, also celebrated Mathew Hodges’ best finish of the season, while Keagan Masters and Adrian Wood put in strong performances in the GTC2 class.

Qualifying was run in dry conditions after Friday’s wet free practice sessions, leaving both drivers struggling to find a racy set-up for their Jetta GTCs in qualifying. Rowe qualified fifth with Hodges in eighth place.

Masters put his Volkswagen Advanced Driving Golf GTi on the GTC2 pole position with a handy margin of 0.6 seconds, while Wood took up sixth spot on the starting grid.

The GTC field formed up with steady rain falling: Hodges made a storming start and raced his Jetta to fourth position, setting the second fastest race lap along the way. Rowe battled with engine mapping set for dry conditions and struggled for pace before spinning to the rear of the pack.

Masters battled with a lack of front end grip and finished the first race in an unaccustomed sixth position. Wood ran a strong race in fourth position before being pushed of the track by a GTC competitor but recovered to finish seventh after dropping to the back of the field.

Race two saw Rowe start from the front row and quickly passed Michael van Rooyen (BMW) for the lead. He was joined at the front by Hodges and ran in team formation for several laps before Simon Moss (Audi) passed Hodges. The thrilling cat-and-mouse race continued, with Rowe soaking up huge pressure from Moss – who got eventually found a way past the Port Elizabeth student.

Undeterred, Rowe piled on the pressure and Moss succumbed, spinning off the track. With Rowe once more in the lead, he defended the advancing Moss to cross the line for his third victory of the year, more than any other driver in the series.

Hodges had a bruising second race: he was in a dog fight with Gennaro Bonafede (BMW), Robert Wolk (BMW), Johan Fourie (BMW) and Moss. Positions changed continually over the first four laps before Hodges broke away and moved into third, which quickly became second position.

Hodges fought his way past Rowe, but Rowe quickly responded and reclaimed the lead. With laps running out, Fourie hit Hodges on the right rear corner, dropping the #57 Jetta down to fourth place at the flag.

The racing action was as frenetic is GTC2. Wood made a brilliant start and claimed the lead which he held until he went off the racing line defending his position, losing his momentum and three places. Masters drove a feisty race, working his way to the front before giving best to Brad Liebenberg (Mini). He fended off a strong challenge from Devin Robertson (Mini) to claim the runner-up position.

Volkswagen Motorsport manager Mike Rowe summed up his team’s weekend: “It was a tough weekend for everybody with changing conditions. Our car was great in damp and dry conditions but we struggled a little when the circuit was very wet. Daniel bounced back to win Race 2 at his home circuit which was great for him and the Team. Mathew had his first decent race day of the season following a run of bad luck.”

Volkswagen Motorsport heads inland for the sixth round of the GTC Championship at Zwartkops Raceway in Pretoria on 18th August.