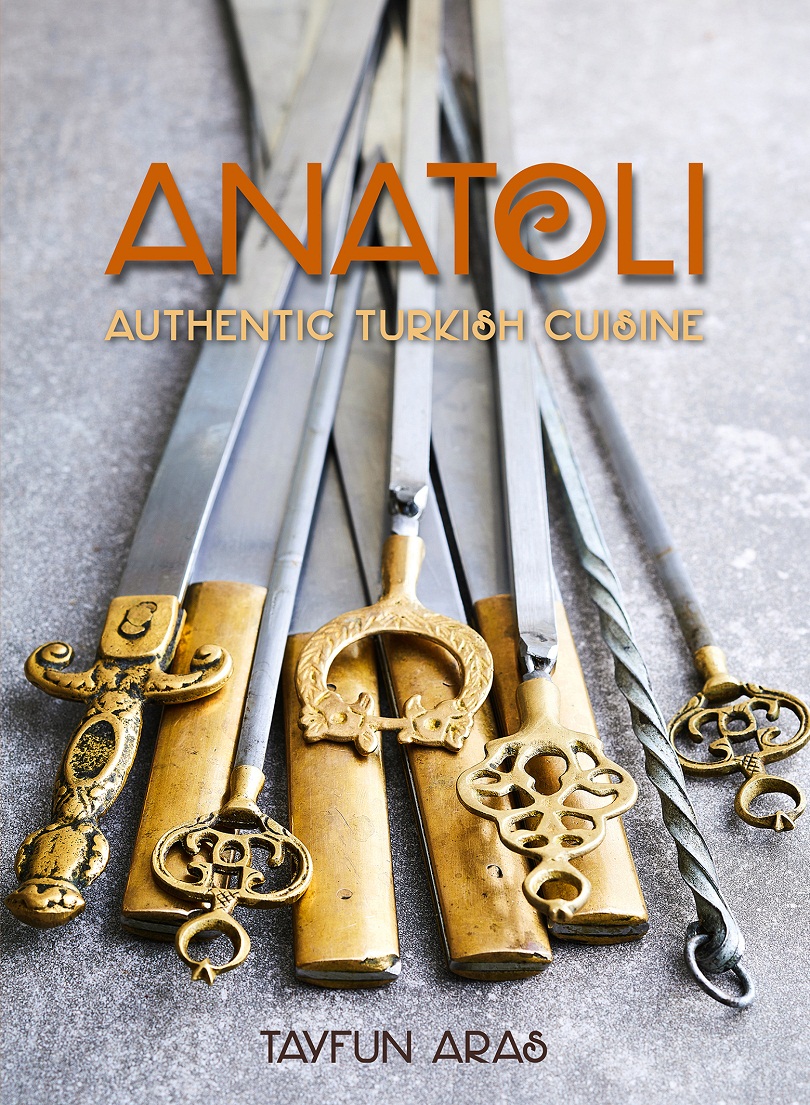 Anatoli Restaurant in De Waterkant precinct of Cape Town is an institution in the city. Aras, an archaeologist, was born in the Turkish capital of Ankara, and learnt to cook at his mother’s knee when he was a teenager.

After a varied career which included selling kilims, carpets and souvenirs from his stall at  the bazaar in Marmaris, he fell for a young traveller, Louise, who later became his wife. He often visited Anatoli when he was in Cape Town and he became the owner in 2000.

The book is the result of many requests from his loyal customers who wanted to learn the secrets of Turkish cooking.

Aras, in his introduction, gives a brief history of his life, Turkish cuisine and how he became the owner of Anatoli. Many clients have described dining at Anatoli as a trip to Turkey without the air fare and diners include Greeks, Arabs, Balkans, Israelis and South Africans.

Now you have a chance to prepare some of Aras’s specialities at home. The contents of the colourful volume include Essential Ingredients; Mezze Tray; Main Courses; Kebaps; Raki; Desserts, Turkish Coffee; From My Home Kitchen and Cay: Turkish Tea.

There are 22 mezzes(best described as appetisers) on a tray at Anatoli and you can choose from Baby Marrow Fritters (mucver); Assorted Olives with a special dressing; Albanian-style Liver;  Stuffed Vine Leaves (Sarma), and to go with it, Anatoli’s famous bread.

Main courses include several Pilafs to go with the entrees, or eaten on their own:  Briami, made with potatoes, courgettes and tomatoes; Imam Bayildi (Imam Swooned) is made with aubergines, assorted spices and pine nuts; Etli Dolma (stuffed mixed vegetables); Papaz Yahnisi (Priest’s lamb stew); a delicious Incik (lamb shanks) and Sultan’s Delight (Hunkar Begendi) will set your taste buds aflutter with its pieces of cubed lamb or rump steak served on a bed of smoked aubergine puree; and Portakalli Pilic (chicken with orange). There is also selection of Kebaps which are usually accompanied by Ayran, a yoghurt drink you can make yourself.

Desserts are an important part of Turkish culture and you will find recipes for Baklava; Crème Caramel; Kayisi Dolma (stuffed apricots); Rice Pudding

taste: Sade (no sugar), Az Sekerli (little sugar) or Orta (medium sweet), for example. Aras also explains how to serve it at home. Turkish coffee is made from Arabica beans, roasted to medium, ground to a fine powder and served from a special pot called a Cezve.

In the chapter, From My Home Kitchen, Aras shares some of the dishes that are too time-consuming to prepare at the restaurant. Among them are a Weekend Morning Turkish Breakfast; Feta-and-Egg Grill; Karisik Kizartma (mixed fried vegetables), and Pide (Turkish bread in the form of a boat with a choice of fillings).

The final chapter is devoted to Turkish tea and Aras explains some of its history and how to prepare it.

If you want to extend your culinary journey beyond a Mac’n Cheese or Pap en Wors, Anatoli will take you there. The recipes are written in easy-to-understand English and if you follow the step-by-step instructions you will amaze your friends and family who will keep coming back for seconds. Sadly, there’s no recipe for Turkish Delight.

There is a comprehensive recipe index and unless stated otherwise the images are by Myburgh du Plessis. The book is peppered with appropriate Turkish

proverbs: You can’t make yoghurt without a starter (If you want to make some money, first obtain some capital);  Anger is sweeter than honey (Revenge is sweet) and He who lives long knows much (The older, the wiser).