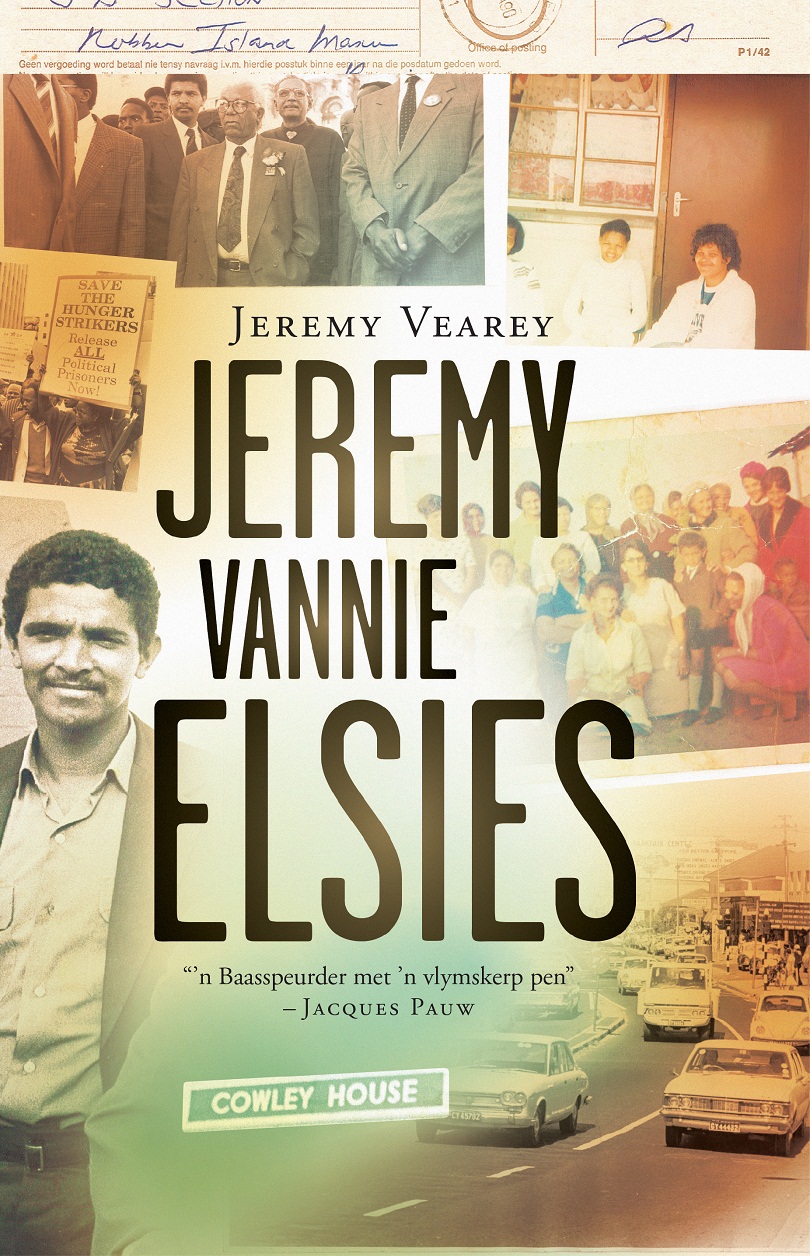 Jeremy Vearey, a Cape Town police officer, is often in the headlines for his crime-busting successes and he frequently writes letters to the editor on the subject of race and land, among others.  Major General Vearey was recently promoted to Deputy Commissioner of Crime in the province, although not without some controversy.  But who is the man who grew up in Elsies Rivier and morphed from a gangster to Robben Island detainee, being part of Nelson Mandela’s presidential bodyguard and then top cop.

Vearey had his first taste of “baasskap” when he was just a “kaalvoet klonkie” of six who dared to run through the Parow subway, in those years meant for  “whites only” when his mother, Annette, a factory seamstress and shop steward took him to buy his first pair of school shoes. It appears that the Portuguese owner of Station Fisheries tried to enlist the help of the Boer (police) and to stop the boy from using the subway he punched him in the stomach and Vearey collapsed, gasping, to the ground. But his mother and the group of women who were with her challenged the Boer to let him go:

“Soek kak met os vandag en djulle is almal witbene”,  and they marched back through the restricted tunnel.

Vearey believes he inherited his sense of justice from his mother who came to his rescue again, when during the school holidays, she took him to the SweetorLibra clothing factory where she worked when school broke up, as was the custom. He was very fidgety in his new school shoes and he wanted to

explore: Annette gave permission but warned him not to touch anything.

Suddenly a white man in a khaki dustjacket screamed at him, “Stop running!

What are you doing here? ”  A woman took Vearey to his mother and told her that the Limey-pig had hit the boy. Which wasn’t true but he quickly backed down when Annette, in her role as shop steward of the Garment Workers Union, told him they have an agreement with management to bring the children in during the last week of breaking up and if they are a nuisance they will deal with them. Not the Limey. Later on the walk home through Louw se Bos, Vearey peppered her with questions. And it was only later in life that he came to understand the wisdom of her words. Another lesson he learnt about injustice was through his grandmother, Jakoba Galant, a staunch Jehova’s Witness, who charred for the Williamson family at their Sea Point home which was bigger than their “djaart” at Elsies. One day she took Jeremy with her and the owner got angry and began berating the boy for playing with his children’s toys. But Jakoba put him straight, and, shamefaced,  “master”

Williamson, backed off. Vearey’s father, Dennis, who sold vegetables from a bakkie,  with his best friend Boeta Frank, also had a profound influence on his life. He taught him business principles, how to fight with his fists, “messteek and bylkap”. He showed him how to kill goats and pigs with a knife in the “djaarts”, the axe was used to chop off the heads of chickens and was a source of great amusement when they ran around headless.

Vearey’s life has taken many twists and unexpected turns; his tale of how they liberated a Duens bread van during a protest in June 1976 and his description using the original Afrikaans, not the language of the Boer, will give you food for thought.

Vearey studied to become a teacher at the University of the Western Cape which is where he got seriously caught up in the Struggle and immersed himself in the study of isms, particularly Marxism, but though the philosophy had an influence on his life he is not a Marxist.

Vearey was 14 in 1976 when the streets of Soweto erupted but he would have to wait until the 1980s, the waning years of white minority rule,  before his real fight for freedom started. Vearey was a detainee on Robben Island when FW de Klerk made his fateful speech on February 2 1990. But for the MK members it was a time of great uncertainty. Dubbed the Fighting 15 by journalist Rehana Rossouw they were not sure if they were included in the amnesty.

Many of us have read about the lives of the ANC leadership on the Island.

But for the first time, as far as I am aware, Vearey explains what it was like for an ordinary MK cadre, although he was very far from ordinary.  The detainees which included ex Hawks’ head Anwa Dramat, Ashley Forbes and Peter Jacobs, now head of Crime Intelligence,  among others, were released much later after Mandela had been free for a while. Vearey’s account of how the group of prisoners had to walk to the Grand Parade to phone for a lift to Cowley House will bring a lump to your throat as will the descriptions of how they were brutally tortured by the apartheid police.

Vearey served as one of the members of Mandela’s bodyguard and he gives a glimpse of what it was like to serve under the country’s first democratically elected president. He relates how every morning Mandela would read the Bible and when they were in the Bahamas, Vearey’s much loved Ouma Jakoba died and he kept the news of her death to himself, much to the chagrin of Mandela who told him that he should find a balance between his revolutionary zeal and his humanity. Incidentally a few years before, Ouma Galant told her grandson that Mandela’s first wife was a Jehova’s Witness.

As part of Mandela’s bodyguard Vearey also helped quell an insurrection of the AWB in the Karoo before he became a member of the SAPS serving with members who tortured him and other detainees.

Vearey also recalls some of his crime-fighting successes including against the gangs; drug-trafficking and the Worcester bomb blast, among others.

The last chapter, So In Die Verby, will tug at your heartstrings. Vearey goes back to his roots in Elsies and meets some of his old friends and he discovers that he is his own man.

dice, en daa waar’it val, land dit soos ek dit wil. Maar by the way, soe in die verby, kaantie, wies jy?” (I make and throw my own dice and where it falls, I have willed it. But by the way, just in passing, just who are you

A selection of historic images add interest to the book. There are pictures of Vearey’s family as well as of a poem by a Robben Island hunger striker.

Jeremy Vearey is a master wordsmith. Jeremy Vannie Elsies will leave you plenty to think about and you will learn things about the Struggle that you didn’t know from an extraordinary man who had an insider’s view. It’s a remarkable story by any account and the publishers, Tafelberg, should consider translating it into English, not only to reach a wider audience, but to give it a chance of winning the Sunday Times non-fiction prize.