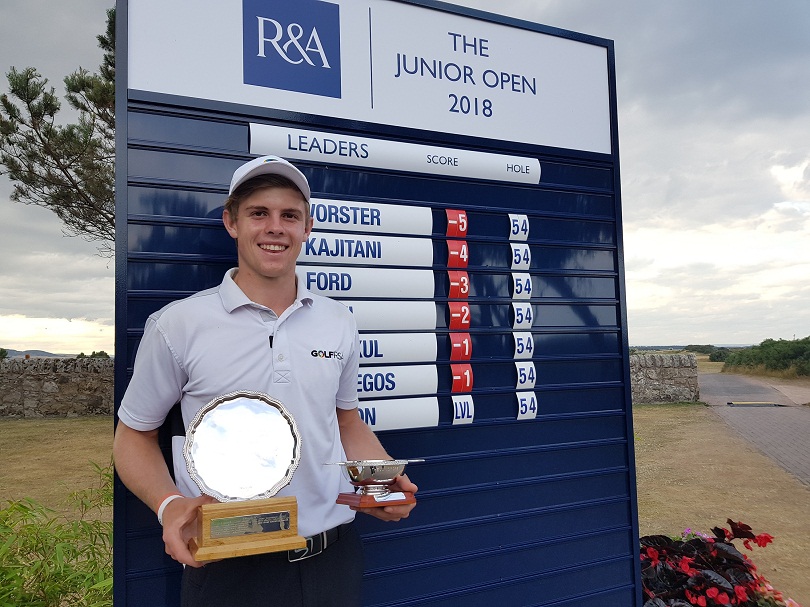 Vorster hit a few speedbumps along the way in the final round at the Eden Course, but the 16-year-old GolfRSA National Squad player kept a cool head under pressure to win by one stroke on five-under 2015.

“I came to Scotland after losing two major junior events at home in a row and that left me doubting myself,” admitted Vorster. “It rattled my confidence and I started to wonder if it was ever going to happen. This win means so much to me.”

The Louis Oosthuizen Junior Golf Academy member opened with rounds of 66 and 65 and was five shots clear of the field at the start of the final round.

His lead took a major knock with a triple bogey seven at the par four seventh.

“I three-putted the first for bogey, but I made a great par at the second and got it back to level with a birdie at the fifth,” said Vorster. “The par three was playing straight into the wind and I had 140 metres flag. I hit a soft 6-iron just over the green and boxed a six-metre putt for birdie.

“I a 3-iron off the tee at seven. It went right and plugged in a pot bunker. I got it out into the fairway and hit my third on the green, but the ball caught a slope and it rolled off. I was right of the green and the flag was front left, so I chipped, but it caught the slope and rolled back to my feet. I just told myself to let it go, because I still had a two shot lead.

“At the next hole, I hit my best shot of the day. The pin was 155 metres and the pin was just above the slope. I hit a 6-iron punch shot to eight foot. Even though I missed the putt, the par settled me down.”

Vorster boxed a birdie putt at nine after a great 5-iron approach, but dropped again at 10 after another errant tee shot. He made six straight pars, but his lead down to two shots again when Japanese golfer Tsubasa Kajitani birdied the par five 16th and he dropped at the par four 17th.

“I hit a great tee shot at 17, and a good second that rolled just over the green,” said Vorster.

“I chipped it to three foot and missed the putt. She birdied 16, so I knew I only had a two shot lead playing the last hole. I hit 3-iron down the middle and sand-wedge in. I had three metres to the pin. It held the line but turned just before the hole, and I just had to tap it in for par.”

Kajitani birdied 18, but Vorster’s par at the closing hole for a four-over-par 74 guaranteed the win.

“That was a nervous moment,” he admitted. “Throughout the round, I told myself I was still in the lead and I just kept my focus on the next shot.”

With the victory, Vorster extended the recent success of the GolfRSA National Squad, pushing the international winning tally to five titles in just over six weeks

Christo Lamprecht, a stable-mate of Vorster’s at the Oosthuizen Academy, set the ball rolling on the GolfRSA UK Tour in early June.

The 17-year-old won the East of Ireland Amateur at Country Louth, becoming the first South African, the first foreign winner and youngest champion in the championship’s 76-year history.

Reigning Sanlam SA Amateur champion Deon Germishuys continued the squad’s success on the Tarheel Tour in the United States. The Bridge Fund Managers Junior Series finalist backed up a six-stroke victory in the Grandover Junior Amateur backed it up with a tie for fourth in the prestigious Junior North and South at Pinehurst.

“It’s really cool to join the circle of winner’s that just seem to get bigger all the time,” said Vorster.

“I was devastated by my losses at home. After losing at the Dimension Data Junior Open, Jovan told me that I was a great golfer and that I just needed to stay patient and keep working hard. He came here to St Andrews before the tournament and said the same things again. He also told me to stay in the moment and to try not to get ahead of myself.

“That’s was key to my win. You know you’re going to get the odd bad bounce in these hard conditions but you’ve just got to learn to live with them and get on with the job.

“I stayed patient. I didn’t worry about what my challengers were doing. I just played shot-for-shot and that kept the round goin. It’s very special to win The Junior Open and all the more so because it’s here at the Home of Golf. You can’t get much better than that.”