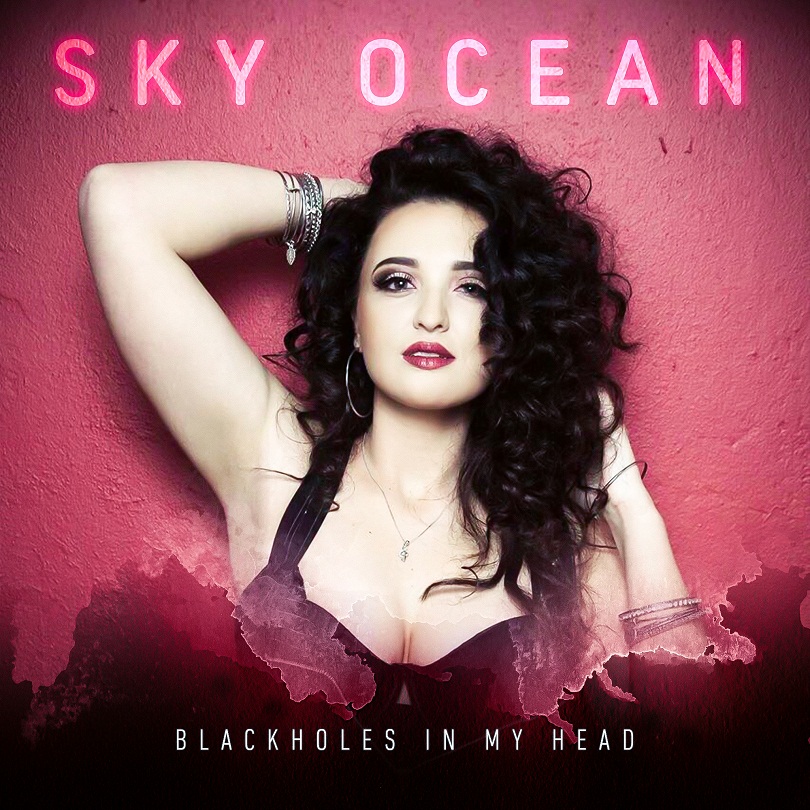 Sky Ocean has one of those voices that stops you in your tracks when you hear her sing for the first time. There is a striking sincerity and soothing sound to her voice that invites you to get lost in her soulful music. It is these characteristics that make her third single, BLACKHOLES IN MY HEAD, so unforgettable.

BLACKHOLES IN MY HEAD is a modern combination of Pop and Rock. The ballad was written in cooperation with Byron Keno and addresses all of those unanswered questions that exist about love. All those things that baffle us about matters of the heart. “Sometimes you give your all to someone before you are even officially a couple. You dive in head first, with a heart filled with hope and trust for the future of this relationship. When things go south and the other person moves on immediately, you are left with a broken heart and a bruised self-esteem. Last September, I went through a similar situation and my experience was the inspiration behind the song,” reveals the singer about her latest release. “I think audiences will be able to relate to the message. Love is something you can feel, but not touch; which makes senses, but also doesn’t. But people are not love, they only experience it. Therefore, it is actually people that are difficult to understand. It is complicated, but people should not be compared to love, because actions speak louder than words.”

The music video for the single was released a while ago and was filmed at a house overlooking the CBD of Johannesburg by Kyle White TV. “It is about a rocky relationship that leads to a love-hate situation between a young couple. Where they were once so in love (memories), they can now hardly stand to look at one another. Beauty has now become pain. They do, however, always get back together because they feel safe and secure in the relationship,” she says. “At one stage in the video, I am torn between the love I feel and the fact that he keeps showing me that it is not good enough. Something which makes me feel sad and angry at the same time.” Kyle created the storyboard and oversaw the project. His wife, Chanel, did hair and makeup and Thiardt Roetz starred opposite her in the video.

BLACKHOLES IN MY HEAD is part of Sky Ocean’s debut album Spore Van My Hart, a contemporary offering that showcases her versatility as a singer and songwriter. It boasts a variety of Afrikaans and English tracks, in different genres, which will satisfy even the most crytical of ears.

There was no specific defining moment that made her realise that she wanted to be a musician. It was just something that was always there. After all, she was able to sing before she could talk and over the years she developed a deep passion for music. She holds a grade five music qualification from UNISA, as well as a grade six vocal certificate from Trinity London College as well as a grade seven vocal diploma from Rockschool.

While the artist enjoys a wide variety of music (especially from the eighties), she credits Demetria Devonne Lovato as her greatest musical influence. “I have been very fortunate to have worked with a number of creative musicians and songwriters in South Africa. And it would be a privilege to work with artists such as Elvis Blue and Die Heuwels Fantasties,” says the singer.

If you ask her about the inspiration for her lyrics, she answers that it often comes from personal experience or from other people’s stories, but that she can only sing a song if her heart is open to it. She shares that she originally wanted to study Theology after school, but that God had different plans for her. There are still a lot that she wants to achieve in the future and she is not afraid to dream big. “I would really like to achieve international status with BLACKHOLES IN MY HEAD, even platinum status if I am lucky, and I am also hoping that it gets nominated for awards. I am shooting for the moon, and who knows, maybe I will end up in the stars! There is no plan B, music is my only option,” she says honestly.

The music industry has taught her that hard work, determination and patience are the key ingredients to success and that you should never doubt yourself. He wants his music to be an expression of what people feel, but don’t always say. BLACKHOLES IN MY HEAD is not only a good example of Sky Ocean’s remarkable talent, but will also secure her a spot in both the hearts of South African music lovers and on the hit charts of the country’s largest radio stations.